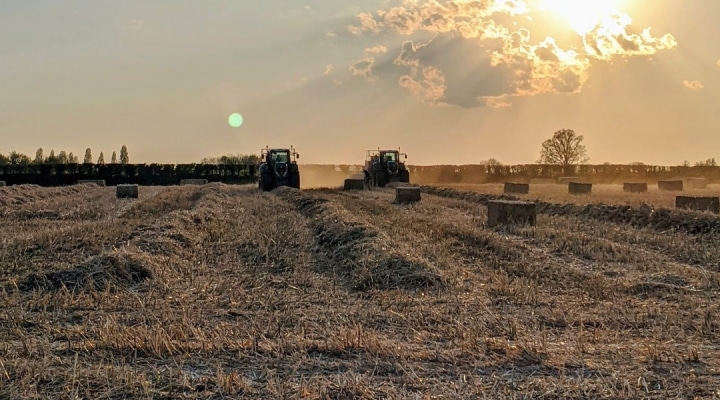 The statewide awards program is in its 94th year and is sponsored by K-State Research and Extension and Kansas Farmer magazine. (Photo by John-Mark Strange on Unsplash)

MANHATTAN, Kan. — Six couples will be honored during this year’s Kansas State Fair as the 2020 class of Kansas Master Farmers and Master Farm Homemakers in recognition of their leadership in agriculture, environmental stewardship and service to their communities.

The statewide awards program is in its 94th year and is sponsored by K-State Research and Extension and Kansas Farmer magazine.

This year’s honorees are:

The annual awards banquet will be held on Tuesday, Sept. 14 at the Kansas State Fairgrounds in Hutchinson. A reception is planned for 3:30 p.m. in the 4-H Encampment Building, followed by dinner at 5;30 p.m. in the adjacent Dillon Hall.

Reservations for dinner are required and are available by contacting Sue Robinson at 785-532-5820 or srobinso@ksu.edu.

Below are short biographies on each couple:

Keith Doane began farming in high school on land rented from his grandfather and knowledge passed down from his father. Today, Doane Family Farms has expanded greatly, but still remains primarily within the family.

Doane Family Farms operates on principles of mentorship, leadership, and cooperative management; by renting and working on the farm, Keith’s sons were able to earn enough money to pay for their college education.

Doane Family Farms manages livestock and crops. One of the longest running operations is their spring cow-calf herd. The Doanes say one of their favorite activities is to check the cow pastures together early in the morning during calving season.

“We believe we can be in service of advancing unbiased data to support better decision making on our farm and for the benefit of our neighbors,” they said.

The couple has four sons: Michael, Rodney, Brett, and Craig; and 10 grandchildren. Together, the family has been deeply involved with their church (Rose Valley United Methodist), school district, 4-H club, and as hosts for international exchange students. They note: “In a small community like Downs, being a willing and active servant leader is necessary to build a high quality of life together with our neighbors and friends.”

The Elliot family farm is on its fourth and fifth generation of continuous operation in northeast Kansas, starting with Howard Elliot’s great grandfather in 1901. Howard and his wife Lori continue to farm alongside their children today and hope to pass on the same lessons they have learned to their grandchildren.

Howard was born on his family farm operation, helping with chores as he grew up. In high school, he was heavily involved in 4-H and FFA – two programs that would continue to make a large impact in the Elliot’s’ lives.

Howard then went on to graduate from North Central Area Vo-Tech School in production agriculture. After graduating, Howard began farming full-time on his family farm.

In his career, Howard served various cabinet positions in the Roy’s Creek Watershed, Northeast Kansas Beef Breeder Association, and Brown-Nemaha pork producers. Outside of agricultural-related activities, Howard has served on the St. Ann’s Catholic Church board, is a member of the Knights of Columbus and helped coach baseball and softball teams.

Lori grew up on her family’s dairy farm in Marysville. Like Howard, she was also very involved with 4-H. Lori met Howard at North Central Area Vo-Tech School where she was the only female in her production agriculture class. Lori is very active in her community, serving on the Hiawatha Community Hospital Board and Hospital Foundation Board, Roy’s Creek Watershed and as a leader of the local 4-H club. Lori also serves as president of the Ladies Altar society of St. Ann’s Catholic Church.

The couple has three children: Mathew, Teresa, and Sara, all of whom are still involved with the family farm. The Elliot’s also have five grandchildren.

The Elliots believe growing up in agriculture teaches profound life lessons. “Livestock taught [our children] about the miracle of birth, and the sadness of death…Crops taught them that sometimes no matter how hard you work and do things the best you know how, that there are times when things out of your control…can make things go bad,” they said.

John and Sharon Hendricks have been involved in agriculture since they were young and continue to pass down valuable knowledge to their children and grandchildren. John hopes that “Through his experiences, he has led by example and encouraged the next generation(s) to be fair, honest, and to do what’s right.”

After graduating from Kansas State University with a degree in agricultural mechanization and serving two years in the military during the Korean War, John returned to his family farm following his father’s death in 1973. Since John has taken up the farm from his father, it has expanded extensively and adopted new, improved agricultural practices.

Sharon graduated from Fort Hays State University with a degree in elementary education. After graduating, she taught second grade at Bird City Elementary before returning home to help the farm with her three sons.

The couple has three children, David, Chad and Nathan; and eight grandchildren.

Today, the Hendricks family farm grows corn, wheat, soybeans, and milo. To improve crop yield and lower labor requirements, they have adopted no-till and strip-till practices. The Hendricks use data from Farm Management, field days, conferences, readings, and farm research guides to assist in their decision-making processes. The farm has also been the recipient of the Cheyenne County Soil Conservation Bankers Award in 1976 and in 2007, and the Goodyear Award of Merit in 1987.

Family and work ethic are the foundations of the Hendricks family farm. They said: “While there is always work to be done on the farm, attending and supporting the children and grandchildren’s activities is a priority, and the work is not neglected, just done at a different time”.

Jay and Stacy Rezac grew up in production agriculture, so continuing their livelihood in it was a natural decision to them. They are grateful seeing their children and grandchildren also grow up in a close-knit agricultural community, and look forward to seeing the farm thrive with future generations.

Jay and Stacy’s paths intertwined early-on: they met at the Pottawatomie County Fair in high school, married after their simultaneous graduations from college, and began farming together after forming a partnership with Jay’s brother, Lance – who still remains a vital part of operations today.

Jay attended Kansas State University and received a degree in animal science. He remains very involved in his local community, where he serves as the president of the Onaga Lions Club and Caring Community Foundation Board.

Stacy attended K-State University alongside Jay and received a degree in education. She taught 2nd and 1st grades in the Onaga School District for 28 years. Since retiring from teaching, she works at the local pharmacy as a certified technician.

The couple has three children, Jayme, Russel and Matthew; and four grandchildren.

All of the members of the Rezac family have been involved in 4-H, the National Cattleman Association, Kansas Farm Bureau and community events. Notably, every year the Rezacs provide their weighing facilities for the Pottawatomie County 4-H beef project, donate a hog for the Onaga firemen’s barbeque, and put on the Ranch Rodeo.

Additionally, the Rezacs highly value supporting the continuing education of young people. Since 1990, they have hosted college seniors from K-State to practice checking cows for pregnancy. “Being active in these organizations has been both rewarding and enjoyable because we get to interact with the best people in agriculture,” they said.

Jay and Stacy are thankful that family lives close-by and continues to help the family farm grow. “Raising our family in a small agricultural community with 4-H, FFA, sports, and a rural lifestyle has been one of our greatest joys,” they said.

Kevin and Vera Schultz have been interested in cattle all their lives. Their involvement in their family farms and active participation in 4H led them to foster a successful and nationally recognized agricultural operation at Sandhill Farms.

Kevin grew up on a family farm in Edwards County, Kansas and purchased his first registered polled Hereford heifer while still in high school. He graduated from Kansas State University with a degree in animal science. Kevin utilized his degree by focusing on developing high-quality genetics for his cattle.

Vera grew up in the sandhills of Holt County, Nebraska where she was involved in her family’s commercial cow herd. She also attended Kansas State University and graduated with a degree in elementary education. Vera substituted at local area schools before devoting her time to raising her family and helping the farm.

Kevin and Vera met in a speech class during their time at K-State. Initially, Vera was not impressed with Kevin’s speech on “How to Polish Your Boots.” Even so, she reluctantly agreed to attend a Farmhouse Barn party with him, and the rest is history.

After the couple graduated from K-State and married, they maintained livestock as an intricate part of their lives. Even while on their honeymoon, the couple made a ranch visit and purchased more registered Hereford heifers for their return to the Schultz family farm.

The couple has three children, Brooke, Tyler and Courtney; and four grandchildren.

Faith and family are cornerstones of the Schultz farm operation. Kevin and Vera are heavily involved in Trousdale United Methodist, where Kevin serves as the Chairman of the Board. They believe strong values have been passed down to their children. Who they say “are outstanding adults.”

The couple said they deeply appreciate their local community and have been involved in the Sunflower 4H Club, Edwards County Extension Council and Macksville School Board, among many other organizations and projects. “[We] enjoy interacting with other farmers and ranchers, who tend to have the same strong values,” they said.

The agricultural roots of the Ellis and Rita Yoder’s family run deep on their farm. The Yoder farmstead has been in the family for over 120 years. Like their parents and grandparents before them, Ellis and Rita strongly value their local community, their faith and their family.

Ellis grew up on the farm in which he now lives. During his grade school and high school years he was highly involved in 4-H and FFA, where his passion for agriculture continued to grow. He went on to attend McPherson College and received a degree in agricultural and rural life.

After college, Ellis served extensively in the U.S. Air Force for 28 years, earning the rank of lieutenant colonel. Today he remains active in his church, the Kansas Farm Management Association, a local Continuing Care Retirement Community, and on his Township board.

Rita grew up in Dickinson County on her family’s farm. She was also in 4-H, where she was involved in projects ranging from beef to leadership to clothing, and won the Key Award.

The couple has three children, Bradley, Kevin and Lane; and four grandchildren.

Ellis regularly attends the No-Till on the Plains and Soil Health U conferences to expand his knowledge of sustainable agriculture. “I have sat next to attendees who traveled from the other side of the world just to hear how to implement sustainable farming methods,” he said. “I’ve got no excuse not to travel 60 miles.”

Ellis and Rita are thankful for their local community and the values that growing up in agriculture has instilled in their sons. “We love our community and the rural values of hard work and honesty…[Our sons] too, in turn, are helping others and making this world a better place in which to live.”