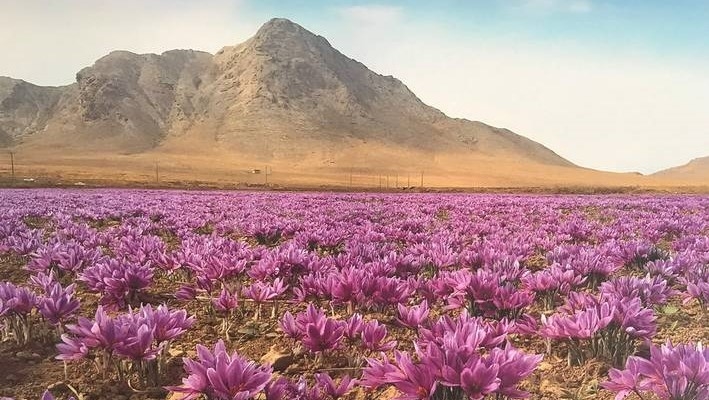 Saffron created a unique opportunity for farmers and local communities in Gonabad, Iran, to improve their livelihoods and increase their income. (Courtesy Photo)

The sites were designated by the GIAHS Scientific Advisory Group based on selection criteria, including: global importance, their value as a public good in terms of supporting food and livelihood security, agro-biodiversity, knowledge systems, adapted technologies, cultures, and outstanding landscapes.

Saffron Farming System based on Qanat irrigation in Gonabad, Iran

The Saffron Farming System is located in Iran’s central plateau that has an arid and semi-arid climate. Severe water shortages in the area pose major threats to food security and livelihoods of local communities.

However, proper use of water resources supplied by the Qanat (or aquaduct) irrigation system and production of high value added products, especially saffron, have created a unique opportunity for farmers and residents of the region to improve their livelihoods.

Saffron does not require large quantities of water compared to cereals, which has resulted in allocation of more areas for the cultivation of this invaluable crop making it a major source of income for many farmer households. Today it plays a key role in creating job opportunities, reducing migration, providing sustainable livelihoods, improving efficiency in water use and productivity as well as developing eco-tourism in the area.

“Territorio Sénia” is located at the meeting point between the areas of the Valencian Community, Catalonia and Aragon. This territory includes 27 municipalities which are linked by their geography, their history, their language and their culture and also have the highest concentration of ancient olive trees in the world.

The existence of 5,000 ancient olive trees is what makes this territory a unique place offering local communities numerous opportunities for rural development, including the recovery of abandoned ancient olive trees and utilizing these for production, a bigger cooperation between economic sectors, production of olive oil, oleotourism and many others. Average annual output of olive oil in the area is estimated at more than 12,000 tonnes. These income generating activities have significantly helped to improve the living conditions of local people. In addition, there are different varieties of olives on each farm, to improve the pollination of flowers and future varieties of olives, contributing to biodiversity.

The agro-forestry-pastoral system in Ait Souab-Ait Mansour is a unique region where argan trees have been cultivated for centuries. This system is based on agroforestry practices in dry stone terraces being highly resilient to arid environment, water scarcity and poor soils.  It uses only locally adapted species and pastoralism activities and relies on a traditional water management provided by the Matifiya – a rain water reservoir carved into rock.

The Amazigh indigenous communities as well as communities of Arab origin have developed a specific culture and identity sharing their traditional knowledge and skills. Although farmers earn the majority of their income from the cultivation of argan trees, the integrated system also provides them with other food and material such as staple crops, cereals, fire wood, meat and wool.

APHIS looks back on 2018 accomplishments