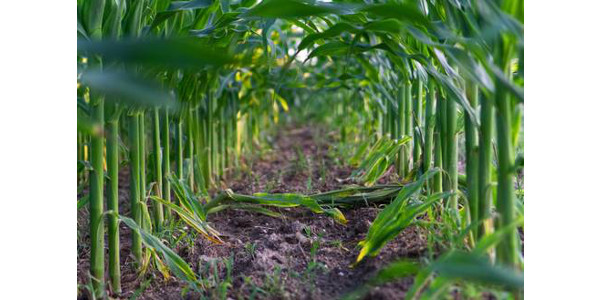 Researchers from Washington and Connecticut are seeking to improve corn nitrogen (N) recommendations to the point that recommendations can be made on a field-by-field basis. (Courtesy of MSU Extension)

EAST LANSING, Mich. — Researchers from Washington and Connecticut are seeking to improve corn nitrogen (N) recommendations to the point that recommendations can be made on a field-by-field basis. The two most common current corn N recommendation methods are the Yield Goal Method and the Maximum Return to Nitrogen (MRTN) method—the method currently used by Michigan State University Extension. These methods are good for achieving profitable yields, on average, across many fields and years, but they are not suited—or intended—for field-specific recommendations.

In “Factors Affecting Nitrogen Availability and Variability in Cornfields,” published Aug. 16, 2018, in the Agronomy Journal, the researchers noted the promotion of the “4Rs of Nutrient Stewardship” concept: right source, right rate, right time and right place.

To develop this model, the researchers used aerial imagery and digital soil maps to guide cornstalk sampling for the Cornstalk Nitrate Test (CSNT)—a reliable end-of-season evaluation tool for corn N status. The researchers started with a two-year study conducted on 683 fields in Iowa, and expanded it to include 920 more fields in Illinois, Indiana, Ohio and Michigan from 2008 to 2014.

The researchers took aerial imagery of these fields in mid- to late August each year. Guided by USDA-NRCS digital soil maps, and aerial imagery, the researchers selected four sampling areas in each of the 920 fields for a total of 3,680 cornstalk sampling sites. The researchers identified three predominant soil types in each field. In ArcGIS, the coinciding aerial image was overlain onto the soil polygon map to choose sampling areas representative of the corn canopy color in each of the three predominant soil types. Then, one cornstalk-sampling site was randomly selected in each soil type for a total of three sites per field. A fourth sampling site in each field was selected in a yellow or light green canopy area, if present. The researchers used the fourth site to determine if the stress associated with the color was due to N deficiency or some other stressor.

Ultimately, the researchers learned that three types of factors had significant effects on N sufficiency levels. One type of factor is changeable by farmers, like crop rotation, tillage, N rate, form and timing. The second type of factors is unchangeable, but their effects can be minimized by implementing management practices. Drainage class, for example, is an inherent characteristic, but N loss can be minimized through the right N form and timing. Applying N in the fall on sandy ground, for example, is a bad idea. Rainfall is the most important unchangeable factor and its negative effects can be minimized through the right N fertilizer timing and by using N stabilizers.

The third type of factors is both unpredictable and unmanageable by farmers. The factor “year” encompasses multiple influential variables that interact with N use efficiency or N relocation to grain such as pest outbreaks or annual variability in soil N mineralization.

The researchers concluded that the 4Rs of Nutrient Stewardship is an excellent framework for discussions about improving N management. They found that N application rate should be considered within the context of other influential, field-scale management and environmental factors, including N form and timing, tillage and rotation, drainage, and cumulative growing season rainfall.