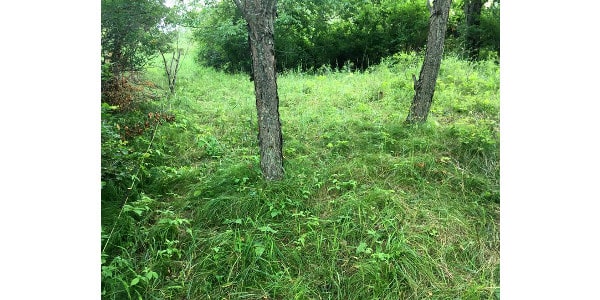 EAST LANSING, Mich. — Michigan State University Extension conducted the first year of silvopasture research in Michigan in 2019. The research was funded by the MSU Extension Agriculture and Agribusiness Institute to establish forage variety plots in the central Lower Peninsula and the Upper Peninsula. The trial consisted of red clover, tall fescue, white clover and orchardgrass, selected for their shade tolerance and ability to withstand traffic.

Each species was planted alone and in mixtures of clover and grass, totaling eight treatments, replicated three times in a randomized block design. Each location was evaluated for its potential to be a site for silvopasture development by grading it for its site quality, access, erosion, hazards, terrain, location and existing timber resources and vegetation. This site score will give the landowner an idea if that site had potential for silvopasture development.

This area is known for its gravely and sandy soils. According to the Natural Resources Conservation Service (NRCS) Web Soil Survey, the area where the silvopasture plot was planted consists of Graycalm sand and Montcalm loamy sand with slopes ranging from 6-18%. The area is not well suited for field crops and is currently in small shrubs and oak, maple and pine trees, along with some grasses. The area had been used to raise potatoes for Central Michigan University several decades ago but has not been grazed or farmed since that time. The location is being utilized now as pastures that are part of the agriscience program for CTE.

Soil tests showed above optimum for phosphorus and magnesium, and optimum for potassium, but a soil pH of 5.6. Due to an extremely wet spring, planting was delayed until June 25. There was considerable growth of the existing grasses at that time, and it was in an area where no site preparation could be performed. We considered this to be a site much like what many farmers working with silvopastures would encounter.

The red and white clovers did establish, although not as good as we had hoped. It was difficult to determine if any of the grasses that were seeded established, mostly due to the presence of already established grasses. There was no mechanical or grazing harvest of the plot area. There were two forage samples taken in the fall; results were 12.5% CP, 43% NDF, RFV 133 and RFQ 96. Nitrate-nitrogen test results indicated less than 300 ppm, which is well within the safe range for livestock.

The second site in central Michigan was at JNelson Farms, owned and operated by Jon and Tammy Nelson and located about 8 miles northwest of Midland, Michigan, on Stark Road. The Nelsons have approximately 200 acres of pastureland to support their herd of grazing cattle and have recently harvested timber to create a silvopasture area on the south end of the farm. This site is where we planted the silvopasture plot. The area was very rough with logging slash left on most of the land. The area was grazed prior to seeding on July 10; seeding was also delayed to the wet spring.

According to the NRCS Web Soil Survey, the area is mostly Belleville loamy sand and Lenawee silty clay with 0-1% slopes. The site was evaluated on May 29 by Thurlow, Crick, Jon Nelson and NRCS district conservationist Boyd Byelich, and received a score of 88, meaning it is a good potential site for silvopasture development.

Soil tests showed above optimum levels for phosphorus and magnesium, and below optimum levels of potassium, with a pH of 6.1. The area was grazed prior to seeding and again in mid-August. Forage samples were taken in the fall and results showed 18.98% CP, 47.24% NDF, RFV 129.84 and RFQ 156.64. Nitrate-nitrogen test results indicated less than 300 ppm, which is well within the safe range for livestock.

Pelkie, Michigan, is located near the Keweenaw Peninsula and is known for its clay soil and snow accumulation. There are predominantly forage-based cropping systems, including livestock grazing, and a diverse, vast forested land. According to the NRCS Web Soil Survey, this site was primarily Ontonagon silt loan with a 1-6% slope. Soil tests showed above optimum levels of phosphorus, potassium and magnesium but a pH of 5.5. The existing timber was primarily white pine and cedar, determined to be of low monetary value and a high density. This location was adjacent to established pastures, making it easy fence and access.

This site scored a 71, meaning the site has potential but carefully consider the benefits to cost. On June 11, leaf litter was removed, forage seed was broadcasted and then rolled to improve seed to soil contact. Ultimately, no establishment occurred. Weather, pH and density of tree canopy all played a role in this sites inability to establish forage.

Garden, Michigan, is located between Manistique, Michigan, and Escanaba, Michigan, and is known for a longer growing season. There are a variety of cropping systems including hay, dry beans, corn, soybeans, small grains and beef-grazing systems. This location was primarily hardwoods including sugar maple and northern white cedar that had already been partially harvested the year prior. The current density was 60 ft2 per acre with no regeneration. This site scored a 95, meaning it has good potential for silvopasture while considering a timber harvest to preserve value. The soil test showed above optimum phosphorus, potassium and magnesium with a pH of 7.5.

According to the NRCS Web Soil Survey, this site was primarily Ontonagon limestone rock land and Summerville fine sandy loam. The demonstration plot was planted on June 13 with no site preparation, and forage samples were taken Sept. 24 prior to gazing. The primary species was orchardgrass, although clover was observed in the fall. Three samples were taken averaging 10.60% CP, 60.13% NDF, RFV 89.13 and RFQ 113.54. Nitrate-nitrogen test results indicated less than 300 ppm, which is well within the safe range for livestock.

At this time, soil testing and forage analysis can be offered to cooperating farms that currently have silvopasture established. We are interested in capturing area, grazing density, forage species and collecting our site score to further understand how silvopasture systems can be prescribed for site-specific characteristics on farms in Michigan. If you are interested in cooperating with us this year, contact either one of us:

Projects show innovation in conservation
May 18, 2020