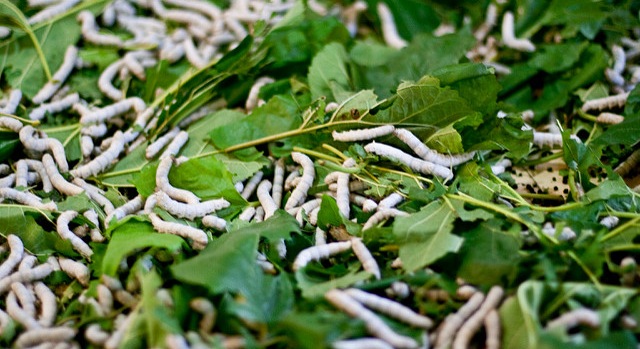 Japan was the world's largest raw silk producer in the early 1900s. But the yield of silkworm cocoons dropped sharply to 130 tons produced by 349 silk-raising farmers in 2016 from its peak of some 400,000 tons from 2.21 million farmers around 1929, according to government data. (Tom Thai, Flickr/Creative Commons)

KUMAMOTO PREFECTURE, Japan — Standing in an upland valley in Kumamoto Prefecture, southwestern Japan, is a huge, dark-silver-colored flat building where silkworms are raised all year round.

Believed to be one of the world’s biggest bioclean silkworm factories, it was completed in April 2017 at a cost of 2.3 billion yen ($21 million), according to Kumamoto-based Atsumaru Holdings Co., one of its operators.

The “Silk on Valley” project in Yamaga, located on the site of a former elementary school in a basin surrounded by mountains, is part of efforts to revitalize Japan’s once-thriving sericulture industry.

Japan was the world’s largest raw silk producer in the early 1900s. But the yield of silkworm cocoons dropped sharply to 130 tons produced by 349 silk-raising farmers in 2016 from its peak of some 400,000 tons from 2.21 million farmers around 1929, according to government data.

At the factory, cocoons can be yielded 24 times a year by using artificial forage, compared with three times in traditional sericulture. Silkworms are usually grown from spring to fall, when mulberry leaves can be harvested to feed them.

“We bought 25 hectares of pasture land on a nearby mountain because we need a large volume of mulberry leaves,” said Yuta Shimada, managing director of Atsumaru Holdings.

“After clearing rocks and weeding the wasteland, we planted 80,000 mulberry seedlings there,” he said.

It was named “sky mulberry field” as they often work in the clouds 600 meters up on the mountain, according to Shimada.

Mulberry trees usually grow 2-3 meters tall. At the field, however, trees are kept low by pruning their tops so that special farm machines can harvest the leaves along a 100-meter row in just five minutes.

As silkworms are vulnerable to chemicals, mulberry trees are grown without any use of pesticides.

The leaves are washed, dehydrated, dried and smashed before being kept in aluminum bags all year round at the factory.

At the time of feeding, the dried and smashed leaves are kneaded with other auxiliary ingredients such as defatted soybeans, shaped into feed sheets several millimeters thick and sterilized before being given to silkworms.

In traditional sericulture, silkworms are fed three times a day. Using an artificial diet, the feeding frequency can be reduced to only three times in 25 days, the period needed for silkworms to cocoon.

Shimada said, “Silkworms have little resistance to diseases. Therefore, the factory is a clean room, preventing outside air from entering.”

Its production target is 50 tons of cocoons a year, comparable to an average annual yield in Gunma Prefecture, Japan’s top silkworm cocoon producer.

“We expect cocoons to be used as raw materials for cosmetics and medicines, not only for silk,” Shimada said. “We hope that related companies will get together, leading to local job creation.”

In other efforts to revive the Japanese sericulture industry, traditional silk producers have started cultivating successors for silkworm-raising farmers.

Gunma Prefecture opened a sericulture school in fiscal 2016. In the first year, 16 people including former office workers joined the school as trainees, of whom eight participated in a practical training program at silk-raising farms with the aim of entering the silk cultivation business in the future. In fiscal 2017 through this March, 11 became trainees and four of them attended training at farms.

“Since the Tomioka Silk Mill in Gunma Prefecture was registered on the UNESCO World Heritage list in 2014, interest in sericulture has increased,” said Toshihiko Okano, a senior official in charge of sericulture issues at the prefectural government.

Noting that Gunma Prefecture, north of Tokyo, is the only location in Japan still to host facilities for the whole silk production process — from making silkworm eggs and breeding silkworms to spinning and weaving — Okano said, “We want to enhance the value of our heritage by adding a living silk producing area to the legacy of the Tomioka Silk Mill. To that end, we decided to foster successors in the sericulture business.”

In western Japan, Seiyo in Ehime Prefecture produces highly regarded shiny white Iyo silk. The city saw the number of silk-raising farmers plunge to six from 1,883 in its prime in the late 1920s.

Amid rising concern over the future of the industry, Ehime Prefecture, Seiyo and other parties concerned launched a council to rejuvenate Iyo raw silk production areas in fiscal 2014.

With the council recruiting newcomers to the sericulture business, one farmer each in fiscal 2016 and 2017 newly started raising silkworms.

In 2016, Iyo raw silk was registered by the central government under its Geographical Indication protection system for agricultural, forest and fishery products.

Local people are also promoting the use of “kibiso,” the waste silk fiber around cocoons that is a byproduct of silk spinning, to make products such as towels, soaps and cosmetics.

“Only 17 percent of a cocoon turns to raw silk, with the remainder being kibiso and pupas. It is important to make good use of kibiso as well without wasting it,” said Shigeaki Nasu, a senior official at the Nomura Silk Museum in Seiyo, one of the council’s member entities at its launch.

In a nationwide move, municipalities with silk-producing experience across Japan have tied up to launch the Silk Town Planning Council in 2010 to rev up the silk industry.