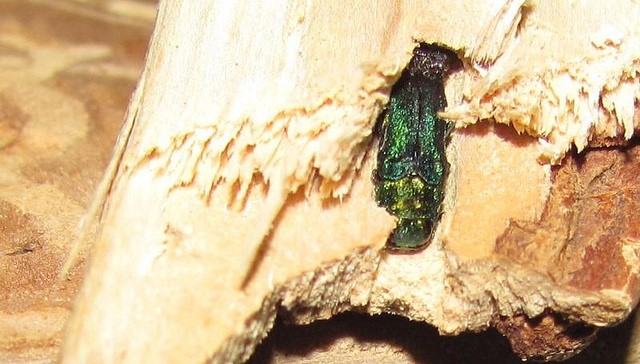 EAB overwinter as larvae under the bark of ash trees where they feed on the inner bark tissue. Once infested, ash trees rapidly decline and are killed in 3-5 years. (Pacific Southwest Region 5, Flickr/Creative Commons)

MONTPELIER — Motorists in the areas of Plainfield, Groton, Calais, Williamstown, Washington, and Barre may notice new flashing road signs reading “Don’t move ash firewood beyond this point.” The signs are part of an inter-agency partnership between the Agency of Transportation, the Department of Forests, Parks & Recreation (VTFPR) and the Agency of Agriculture, Food and Markets (AAFM) to slow the spread of the Emerald Ash Borer (EAB), which has been detected in the vicinity. Signs are located on state highways and are visible to motorists leaving the EAB-infested areas.

The signs will be in place through Memorial Day weekend. In addition to their message, they serve as a visual reminder of where the borders of the infested area lie.

Vermonters outside the EAB-infested area and throughout the state should always ask their firewood dealer where the wood is coming from. The rule of thumb is to not move any untreated firewood more than 50 miles, and Vermonters living outside the infested area can do their part to slow the spread of EAB by making sure they are not purchasing infested ash.

EAB overwinter as larvae under the bark of ash trees where they feed on the inner bark tissue. Once infested, ash trees rapidly decline and are killed in 3-5 years. This pest is known to be established in 32 states and three Canadian provinces, and is responsible for widespread decline and mortality of hundreds of millions of ash trees in North America.

Vermonters are encouraged to look for signs and symptoms of the emerald ash borer and report suspicious findings on VTinvasives.org. Detailed information about the pest and what to look for may be found at the same website. Vermonters can also learn more about what EAB damage looks like and how to report a potential sighting by visiting http://agriculture.vermont.gov/Emerald_Ash_Borer. Video and pictures of EAB damage in Vermont can also be found there. Private land owners looking for information about managing ash in woodlots and UVA (current use) plans should contact their county forester, contacts for which can be found at http://fpr.vermont.gov.

Forests bouncing back from beetles
February 17, 2020