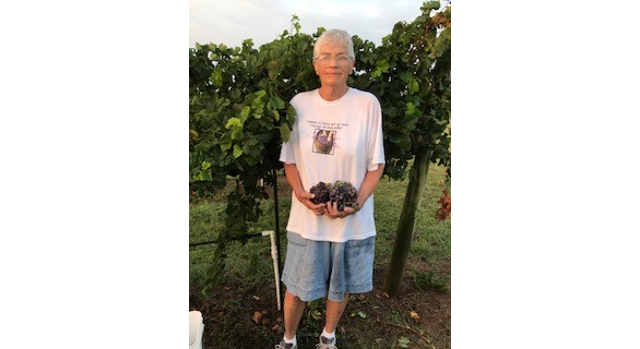 Jill Stichler, pictured at her Vineyard in Slaughterville, Okla., is being honored as Significant Woman in Oklahoma Agriculture for her pioneering efforts in the Oklahoma viticulture industry. (Courtesy Photo)

SLAUGHTERVILLE, Okla. — Tucked away just a few miles east of I-35 in Cleveland County, is a small slice of paradise. Willow trees frame a peaceful pond, birds sing from their branches, and sunlight illuminates grapevines that stretch across four acres.

For Jill Stichler, it is a beautiful utopia created by a labor of love.

“I always wanted to have a vineyard,” Stichler said.

She started the vineyard with 114 Riesling grape vines in 1999. By 2003, Stichler was harvesting, processing, pasteurizing, bottling and distributing her own grape juice under the label “Redland Juice Company.”

It all began one day as she was driving home and came across the Canadian River Winery planting their first grape vines. After a brief visit with them and sharing that she too had always wanted to grow grapes, she struck up an agreement to grow grapes and sell them to the winery. Not long after, she bought her first vines from them.

“Once you plant the vines, they have to grow for a couple of years before you can harvest them,” Stichler explained.

Stichler worked her vines for a few years before getting her first harvest. Once they were producing, she harvested grapes for both her own juice making and for the winery.

Today, Stichler is also a 25 percent partner in the Canadian River Winery.

Until very recently, she has maintained the vineyard on her own, with little manual labor help from others. However, there is one time of year that Stichler has always welcomed all the help she can get. When it is time to harvest, she calls on family and friends to help her.

“It’s a big family event,” Stichler said. “I couldn’t do it without them.”

Stichler explained that juice making can sometimes be a more complicated and delicate process than wine making, because the grapes cannot get above a certain temperature or they will start to ferment. This makes the entire process of growing, harvesting and producing extremely time sensitive.

Stichler soon became an influential person in the industry because of her passion as well as her knowledge. She studied Viticulture and Enology at Grayson County College not long after planting her first vines.

Over the years, Redland Juice Company has received numerous awards and accolades for juice varieties and Stichler continues to take great pride in her work today.

“Jill is an amazing business woman,” said Sharon Harrison, Jill’s sister. “When she sets her mind on a project, you know she will find a means to make it successful through hard work and determination.”

Though it was truly a hobby for Stichler, she also wanted to help others receive the education and resources they needed to become successful and allow the industry to flourish in Oklahoma.

She was responsible for securing three Specialty Crop Block Grants, one for an economic impact analysis of the industry in Oklahoma, another for a vineyard quality survey, and the third for setting up the wine lab at OSU Food and Agricultural Products Center (FAPC).

Stichler worked closely with FAPC and credits Dr. William McGlynn for his role in assisting her personally, as well as establishing the wine lab. She was the first woman to serve on the advisory FAPC board, appointed by Governor Brad Henry, and remained on the board for six years.

To many, Stichler is a shining example of how someone can be successful in learning and mastering a new trade.

She did not grow up in the viticulture industry. She and Sharon grew up on their family cattle ranch in Creek County. In addition to cattle, her family also raised bison and kept a garden.

When Stichler was 11 years old, her family relocated to Norman. She went on to the University of Oklahoma where she majored in Zoology, and minored in Botany and chemistry.

She graduated college in the middle of the Vietnam War, and immediately went to work for the Tinker Air Force Base as a logician tracking High Speed Anti-Radiation Missiles.

It was during her time at Tinker that she met Lieutenant Colonel Richard Stichler, a C-130 pilot. The two married and relocated to California when Richard received transfer orders. Stichler transferred her logistician work to the U.S. Navy.

As military life goes, they moved again to Washington D.C., and there Stichler went to work for the Naval Air Systems Command and eventually the National Weather Service. While in the Baltimore area, she also earned her Masters of Administrative Science from John Hopkins University.

Only seven years into their marriage, Richard tragically passed away at the age of 48 after a battle with lung cancer.

It was losing Richard that motivated Stichler to come back home to Oklahoma and be close to her family. She stayed with the National Weather Service until 2001 when she retired and put her full attention and heart into her vineyard.

Stichler’s passion is what has kept her going despite obstacles with her health and Mother Nature. A recent tornado blew the roof off her home of 25 years, but left her vineyard untouched.

“There is nothing in life like harvesting the fruits of your labor to be sold or shared with friends, family and neighbors,” Stichler said.

What began as a mere hobby has become a lasting legacy in the Oklahoma grape industry.

Trump’s “help for farmers” may be hindrance