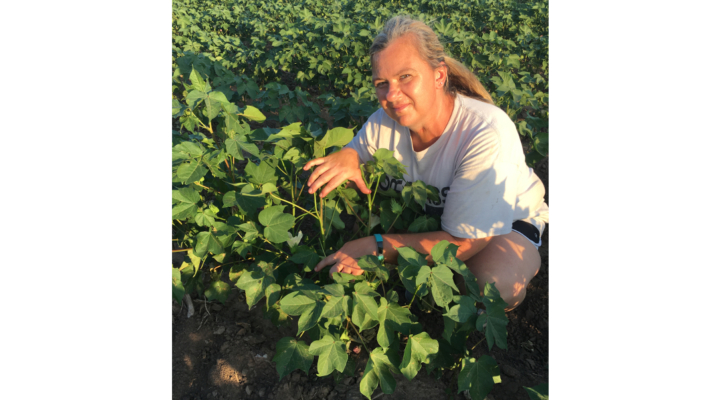 Kellie Muller of Martha, Okla., has been recognized in the Significant Women in Oklahoma Agriculture series. (Courtesy Photo)

MARTHA, Okla. — It was the summer of 2006. A guest in the Mullers’ farm house near Martha, Okla., sat at the kitchen table visiting with Matt Muller.

Within a few minutes, wife Kellie, then 31 years old, entered the room.

In her arms was a stack of freshly laundered towels.

While the towels were neatly folded, it would appear her life was coming unraveled – unless you know Kellie Muller.

The smile was just as warm as the towels she had taken from the dryer, but her thick brownish/black hair was gone.

In the middle of wheat harvest, she had been diagnosed with an aggressive form of breast cancer. A large tumor was removed. She had a double mastectomy and had finished her third chemotherapy treatment a few days earlier.

On that summer morning in 2006, Kellie sat down at the table and told the visitor, “It was tough initially. It’s kinda like farming, when you can’t control the rain, and this is something you can’t control. That’s when you have to totally rely on Jesus for daily strength, especially around the kids.”

Matt and Kellie Muller are nearly 11 years down the road from that day, and as always, they are up to their hearts in farming. They have a daughter Taylor, 21, son Levi, 20, son Luke, 18 and son Lincoln, 16. Kellie’s typical day on the farm may include anything from picking up parts in town to helping repair something, driving trucks, driving tractors, irrigating, record keeping, preparing meals or animal husbandry. She could be tasked with financial decisions and crop decisions, such as to fertilize, to spray or to water.

Should the family plant cotton, milo, canola, mung beans or wheat? When should they sell? Is the market at a point they can make money or will we they go in the hole?  There are so many details.

Life is fast, but not unappreciated.

“Having cancer at the age of 31 was probably the toughest time of my life,” Kellie said earlier this month. “I look back on it now, 11 years later, and I wouldn’t trade the heartaches and lessons that our family went through and learned.  My kids have a faith in Jesus Christ that most adults can’t even fathom.  I cherish every moment I am alive and try to live life to the fullest because I am not guaranteed tomorrow.”

Kellie was born in the spring of 1975 in Harrison, Ark., and was raised in the small community of Oak Grove in the beautiful Ozarks. Her family – parents Gary and Marjorie White and sister Stephanie – worked on their farm, which today consists of 100 acres where they run a cow/calf operation while also raising commercial turkeys.

“We always worked together on our farm which gave us a bond and work ethic,” Muller said. “God was important and my complete Rock during my toughest parts of my life.”

Kellie met Matt in May 1995 in his parent’s driveway in Martha. She had traveled to Altus to stay with her sister during Stephanie’s final two months of her pregnancy. Stephanie’s husband was stationed in Altus in the Air Force and had met Matt at a church in Martha.

“I always wanted to marry someone that made their living on a farm that I could come along side and be a help mate and partner,” she said. “We were a great fit and God has blessed us so much over the years.  We sacrificed a lot of luxuries early on in our marriage so I could stay home and raise the kids with Matt on the farm.”

Almost anyone involved in agriculture will agree that it provides continuing education.

As an individual, agriculture has taught Kellie, “Nothing is ever easy, but determination and dealing with the situation at the time is the best you can do.”

As a wife, it has taught her, “That a husband’s worth is sometimes determined by his career and I need to encourage him during times of disappointment and enjoy the daily time I get to spend with him.”

As a mother, she said agriculture is, “The easiest ways to teach your kids about life, death, nature, finances, truth, responsibility, where your food comes from and ultimately God is in charge of all things.”

And as a person of deep faith, Kellie shared, “Agriculture is dependent on so many factors but most importantly on God’s timing.  He is in control of weather and all of life which doesn’t always fit our schedules.  That is where the true faith lies as we do all we can but ultimately, it is God’s timing that makes or breaks a good crop.”

Growing is not limited to the size of the farm operation or to crops. Muller strives to help others grow.

She has been involved in Farm Bureau Young Farmers and Ranchers for 15 years and is still active in Oklahoma Farm Bureau. She has helped in numerous activities their kids were involved in, including FFA and 4-H.

“We also take agriculture to our downtown square during the Altus Chili Cook off and just share what we do, and why,” she said. “I feel these things are important for outreach, political involvement and sharing our life experiences instead of someone that doesn’t live it every day.”

And every day, the Mullers juggle the challenges that come with handling today and yet preparing for tomorrow. Take for example the drought that began about Oct. 1, 2010, according to Gary McManus, state climatologist with the Oklahoma Climatological Survey. Martha is located near Altus, and Altus was not out of the drought until late May 2015, according to the U.S. Drought Monitor.

Between the onset of the drought and the day before Altus began getting good rains on April 11, 2015, the Oklahoma Mesonet weather network station at Altus recorded 75.9 inches of rain, which was 48.4 inches below normal for that time span, McManus said.

“The drought was pretty tough,” Kellie Muller said. “In our line of work, you save during the good years so you can make it through the bad.  Matt and I had been trying to become debt free a few years before the drought hit.  We had accomplished that and had saved some money too.  That helped us stretch through the long drought.  We keep in mind there will be good years but the bad ones will come so prepare for those.”

That’s an example Kellie and Matt hope their children have not only heard, but seen. Their two younger children have expressed an interest in coming back to the family farm.

“I would love to see my boys and their wives and my grandkids enjoy the life that we love so much,” she said. “Agriculture is changing all the time and you don’t just plow some dirt and throw out some seed and it all works out great.  There is unbelievable hard work and extreme management that goes into this career, but more importantly it is a life style that is different each new day and we love what we do.”