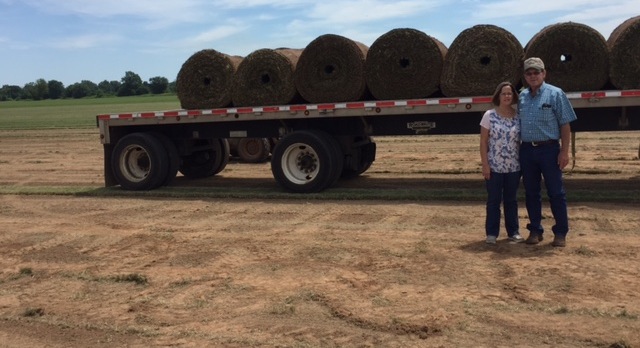 Jan and Don Sebo of Spiro, Okla., operate one of the largest sod farms in the region. (Courtesy Photo)

OKLAHOMA CITY — Near the Oklahoma-Arkansas border is the small town of Spiro, Okla., population of 2,167. Twenty two years ago, even Jan Sebo could not have imagined that it would become home to one of the largest sod farms in the region, and she would be a part of that operation.

Jan was raised on her family farm in Spiro where her father ran a small operation of Angus cattle. There was not a 4-H program in the area, and FFA was not an option for young women at that time.

It wasn’t until marrying her high school sweetheart, Don Sebo, that Jan really had the opportunity to get involved with farming.

“We went to high school together,” Jan said, “and now we will have been married 45 years next month.”

The two were married in 1972, just a few months after high school graduation.  Jan and Don began farming soybean and wheat on Don’s family farm that he ran with his father and older brother. In 1985, Don’s father retired and they bought his family farm. The early years of building their farm were full of long, hard hours.

Jan recalled early years of a severe drought where they had to irrigate 24 hours a day, moving the lines every four hours for a few weeks while their three children stayed with family.

But even through those difficult times, it was the life they both wanted to live.

“I enjoy it,” Jan said.  “The Lord has blessed us with a good business, but it wasn’t without some stress.”

Their three children grew up in rodeo, and in the early 90s they met a couple at a rodeo that planted a seed for their future business.

“We met some people that had a sod farm near Durant,” Jan recalled. “They told us to look into it; we said ‘that’s not our kind of thing.’”

Five years later when their son Justin returned from college and decided to help with the family farm, the Sebos began a sod farm of 40 acres. After about a year, the sod farm had already begun to take off.

Twenty two years later, that 40-acre sod farm has grown to nearly 1,200 acres and has become one of the largest sod farms in the region with a tremendous market in Northwest Arkansas.

Some of their largest customers have been sports complexes, golf courses, Walmarts and commercial landscaping. In addition to their sod farm, they still run 1,500 head of Red Angus and Brangus, and raise 6,000 acres of soybeans, 1,500 acres of corn, 2,000 acres of wheat, 500 acres of alfalfa and a few hundred acres of oats.

Now that they can hire help on the farm, Jan’s role in the operation has changed over the years from running hay rake or plows to managing the finances of the farm. A job that cannot be praised enough according to Don.

“She has the hardest role of us all,” Don said.  “She’s as good a money manager as there is.”

Jan and Don have also opened their farm to the Ag in the Classroom tour for the past two years, bringing over numerous teachers onto the farm, feeding them and giving them a tour of their sod and cattle operation.

“The Sebo Family graciously hosted the Ag in the Classroom summer road trip in 2015 and 2016,” said Audrey Harmon, Market Development Coordinator. “They provided an amazing lunch, as well as a tour of their cattle ranch and sod farm. They took time out of their busy schedule to educate the teachers about agriculture and answer all of their questions. Oklahoma Ag in the Classroom appreciates the Sebo family and their contributions to Oklahoma agriculture and increasing agricultural literacy.”

While a lot of hard work and years have gone in to building their successful farm together, the Sebos say they are blessed.

“God has been good to our family,” Don said. “We lean on the good Lord every day.”