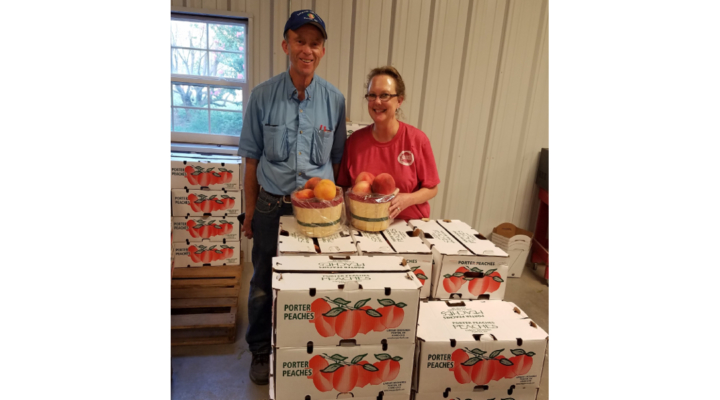 Dawna and her husband Kent Livesay purchased an orchard and farm stand in 1997 where they established the Peach Barn. Dawna is being recognized as a Significant Woman in Oklahoma Agriculture. (Courtesy Photo)

PORTER, Okla. — On a hot summer day at the corner of Highway 69 and Highway 51B, you will find a red barn with fresh Porter peaches, fried peach pie and cobbler, peach ice cream and Dawna Livesay hard at work.

When Livesay and her husband, Kent, purchased an orchard and farm stand 1997, they had no idea what it would become 20 years later.

“I thought it was a great marketing opportunity for the family orchard,” Livesay said. “I remember standing there thinking ‘how am I going to fill this space?’ Within a few years, we needed more room. It’s a blessing.”

When Blackledge-Fisher Orchards announced they were selling a portion of their orchard along with their highway farm market, Livesay instantly thought it would be a perfect to have another market for the family to sell their produce from Livesay Orchards, which is owned and farmed by brothers Kent and Steve Livesay.

But before they could buy it, the orchard and highway stand went under contract to someone else.

“I thought we had missed our opportunity,” Livesay said.

As fate would have it, the original contract fell through, and the property was back on the market within a year.

Livesay said they consulted with their pastor before making any final decisions. One priority they were not willing to give up was their family. At the time, they had their oldest son Kyle, but knew they wanted to grow their family.

In 1997, they purchased the orchard and farm market and re-named it The Peach Barn. Since then, Livesay has played a primary role in the business and dedicated much of her time to the store, spending nearly every day it is open at The Peach Barn, from early June until Christmas Eve.

Livesay is passionate about making The Peach Barn a success. She has worked closely with the Food and Agricultural Products Center (FAPC) at Oklahoma State University to develop products and utilize as much of their produce as possible. She found that instead of throwing out the remaining peach juice after making a pie filling, they could take it to a packer to make jellies. Their “number two” peaches, those not sold as fresh produce, are used to make pie filling, jams, salsa, BBQ sauce and more. Those products can then be sold on the shelf at the Peach Barn and some even make their way to local grocery stores.

Though she has played a key role in the growth of their business, and spends a significant amount of time at The Peach Barn serving as manager, she is quick to credit the success to the loyal employees and customers in their community that have helped make it what it is.

Livesay says their dedicated employees are the reason she was able to continue with The Peach Barn while raising and homeschooling their two sons, Kyle and Nathan.

Aside from using her education degree to homeschool their children, Livesay found another unique way to incorporate it with her role in the family business. She began leading school tours for Livesay Orchards, driving the tractor for the hay wagon and giving presentations. It has grown so much that they need 10 people to assist with tours today.

Livesay divides her day between the Peach Barn and Livesay Orchards beginning in September, when their main peach season has begun to slow down. She schedules and manages the apple and pumpkin school tours, which she says can be a full-time job by itself. School tours begin around the third week of  September and continue through mid-November.

As soon as school tours conclude, Livesay said she switches her focus back to the The Peach Barn fulfilling orders of pies, homemade cornbread dressing, sides, gift baskets, jar products and cracked pecans for Thanksgiving and Christmas.

“We even have pecan crackers as well,” Livesay said, “So we crack and sell locally grown pecans starting in October through Christmas Eve.”

Though she is very knowledgeable about their industry and business today, Livesay was not always engaged in agriculture. She grew up in Lawton, Okla., and obtained her music degree with a teaching certification from Cameron University.

One summer during college she took a part-time job at the Livesay Orchards, where she met her husband Kent. The two married in 1992.

“We had been married for about two months when we went to a week-long fruit school through Michigan State University, it all went way over my head,” Livesay laughed.

In addition to managing The Peach Barn, she handles the HR and marketing, and serves as head bookkeeper for their business as well as Livesay Orchards.

The Peach Barn has changed significantly from the small highway market it was when they first purchased it.

“I ordered quilts to hang on the walls when we first bought it so it wouldn’t look empty,” Livesay recalled. “We just expanded; I never would have thought we would run out of room.”

Shortly after the Livesay’s took ownership, they added a gift area and started offering peach sundaes. Later, they added a bakery which offers their homemade fried pies, whole pies, cobblers and peach muffins. In 2007, they added a seating area and began offering fresh, made-to-order sandwiches.

Of everything they sell, Livesay said the fresh peaches from the family orchard are still the customer favorite, followed by their fried peach pie and homemade peach ice cream.

Livesay cannot keep up with the baking by herself, so any given summer they have an average of 30 employees from the community working in The Peach Barn in retail, making pie filling, pie crusts, cobblers, ice cream and more.

Giving back to their community is important to Livesay. In addition to providing jobs for many in the Porter area, she has been a member of the Porter Lions Club for over 20 years. In 2014, Livesay said she had the opportunity to select an organization to receive $2,500 from the America’s Farmers GROW Communities Monsanto Fund. Livesay chose to direct the funding to install a fence around the Lions Club’s new playground and park that sat near the road.

She has also been a church pianist since she was in the 9th grade, served as a 4th grade choir teacher at the First Baptist Church in Broken Arrow for over six years, and now co-teaches middle school girls’ small groups.

Livesay and her husband are thrilled that their oldest son Kyle, who just finished a Horticulture degree at the University of Arkansas, will return to Porter to help with the family business. Their youngest son Nathan is a junior in high school and studying pre-engineering at Tulsa Tech.

“I feel blessed and proud that the business has grown over the years,” Livesay said. “Kent and I love working together, we feel blessed to work where we can see and talk to each other and our boys throughout each day.”

Get calves off to the right start