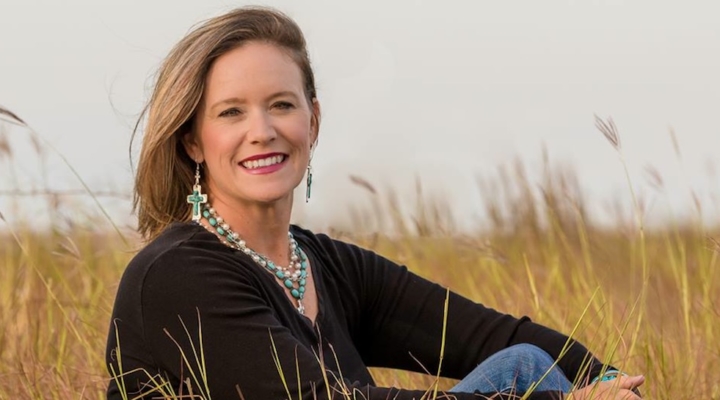 Araine Cash of Laverne, Okla., has worked for the Buffalo County Extension office for over four years and served as the chief contact for relief efforts during the 2017 Northwest Oklahoma Complex Fires. (Courtesy Photo)

OKLAHOMA CITY — A semi-truck loaded with hay pulls up beside a gas station in downtown Buffalo, Oklahoma. Donning Nebraska license plates, the driver steps down out of his charcoal-gray Peterbilt and walks towards the door of the station. He hasn’t stopped for fuel or an ice-cold Coke to combat the heat – he’s looking for someone in charge. He opens the revolving glass door, sticks his head in and asks the clerk behind the counter, “Do you know where I can find Araine?” The clerk points up the road to the Harper County OSU Extension Office.

Perhaps his question would be unusual or confusing had it been a few weeks earlier. However, when fires broke out in northwest Oklahoma last March, Araine Cash became the chief contact for relief.

Born on a small farm in Laverne, Oklahoma, Cash was brought up working hard, and enjoyed it too.

“My dad and grandad raised cattle,” Cash said. “Our farm was small, but I have so many good memories working cattle and walking the dirt roads.  I loved growing up where I did because it taught me the value of hard work and the importance of community.”

Cash’s love for her community and family is what eventually brought her back home. She and her husband, Duston, married in 2003 and lived in Oklahoma City for several years. However, Cash wanted her daughters, Jaycie and Whitley, to have the same opportunities and experiences that she so cherishes about her own upbringing.

“I moved back home to Laverne in 2013 after being in Oklahoma City for 15 years,” Cash said. “I was told about a job opening as secretary for the Harper County OSU Extension office. I was very interested in it since I was in 4-H as a child and know the value it has for our youth.  I feel blessed to work alongside some of the most amazing people in Harper County.”

For over four years, Cash has made the 46-mile round-trip from her home in Laverne to the OSU Extension office in Buffalo. However, the role Cash played in the spring of 2017 wasn’t included in the job description.

On March 6th, the first wildfire was reported in the Northwest. What began as one fire eventually turned into three that would engulf over 800,000 acres across northwest Oklahoma and southwest Kansas. The wildfires claimed so much and affected so many – all right in Cash’s back yard.

Within hours, donations from across the country began arriving in the form of fencing supplies, tools, calf milk replacer, clothes, food, but most of all, hay. While eating lunch at Wagg’s Bar-B-Q, one Woodward local stopped counting the passing trucks when he reached 30. Cash and her coworkers at her office took on a daunting task: organizing the influx of donations and making sure they were distributed.

“I was in a meeting at the Tyree Ag facility when the fire turned south and headed towards Laverne,” she said. “We had to evacuate the building as it was less than a mile north of us when the wind shifted.  Seeing something so powerful headed right toward you is a helpless feeling. It is a fear that is hard to explain.  The next morning I received a call at our local extension office from a gentleman wanting to donate hay, so I jotted his name down on a piece of notebook paper.  My list grew to over 100 names by the end of the day. It was then that I realized the job was going to be much larger than I anticipated.”

While some may label organizing a flood of donated materials as a challenge, Cash calls it a blessing from God. She was able to work with the OSU Extension IT department to develop a website where people across the nation could list their donations and services available.  If ranchers across the nation wished to donate hay, but lacked the ability to transport it, the website would connect them with someone who could.

Cash put in her fair share of hours throughout the month of March, working up to 20 hours a day at times. Volunteers did not simply go home for the evening, but instead went to “rest for a bit”. She called periodically to check on Jaycie and Whitley and to tell them goodnight, knowing full well that she would get home and be gone again before they woke. When Duston was done with work, the two would take their daughters to hay drop-off locations where they would help unload round and square bales as a family.

Watching Araine interact and visit with locals could pass for a scene out of Sweet Home Alabama. Many of the local volunteers have been friends since childhood – still spending their free time in the evenings and weekends enjoying each other’s company. Although, when the devastation of the wildfires hit home, they all came together for another reason: to help.

Tom Fanning, a lifelong native of northwestern Oklahoma and Head Manager of Buffalo Feeders, worked at the forefront of the volunteer and relief effort with Cash.

“Araine stepped up and led much of the logistical efforts of recovery and supply for the area farmers and ranchers who lost much of their livelihood in the devastating wildfires,” Fanning said. “There was no manual to follow, but her will to help those in need was what prevailed. Araine showed her true love for the community and her selfless nature as she committed 100 percent to the relief and restoration of the farmers and ranchers of northwest Oklahoma.”

While disaster is not a stranger to Oklahoma, neither is the love and support that follows. It does the heart good to hear the stories of generosity and compassion – stories that Cash loves to tell.

“I learned that beautiful things can come from disaster,” Cash said. “The amount of love and support from our state and nation was overwhelming.  So many people came together to help out.  I am humbled by the generosity of people all over the United States. I’ve built relationships and lifelong friendships with ordinary, everyday people who wanted to make a difference with nothing expected in return. I love our community and just did what I felt I could to help out in what was one of the biggest blows to our little corner of the world.”

As the country reflects on the wildfires in northwest Oklahoma, many will remember images of courage by those affected and the selfless acts of kindness towards them. There is no doubt that for many that image looks like their friend Araine Cash, whom they met while simply trying to show love to others.