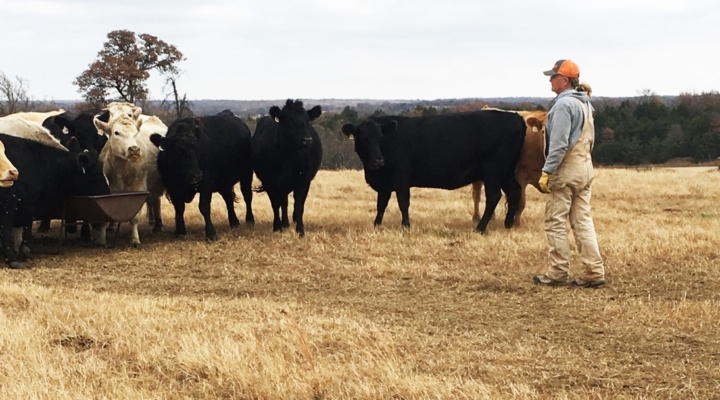 Angela Brooks-Brown of Wetumka is being recognized as a Significant Woman in Oklahoma Agriculture. She takes care of 225 head of cattle on 1,600 acres. She also cuts and rakes hay for baling with her family. (Courtesy Photo)

WETUMKA, Okla. — At 8 years old, Angela Brooks-Brown’s father stuck her on a tractor.

“My dad started us out on a Minneapolis-Moline [with no cab or canopy],” Brown said, “and you would have to use yourself and the steering wheel to hold yourself up to push the clutch in.”

Standing up with both feet on the clutch, Brown learned to drive a tractor all by herself.

“Out in the middle of an 80-acre field that we would disc up and offset and run a breaking plow through to farm peanuts, there we’d be,” she laughed. “He’d drive around the section line every once in a while to check on you.”

Brown didn’t mind, however. In fact, she fell in love with agriculture. The only daughter of three children born to John and Linda Brooks, she was a daddy’s girl, and where Dad went, she followed.

“I backed him a lot in whatever he wanted to do,” she said. “He’d give me that little smirk and a wink of his eye, and I’d say, ‘Sure enough.’ He’s Dad, so as long as I got that little smirk on his face and a wink, I knew we were going to be alright. He taught me everything I know.”

Brown’s mother was the part runner and the cook, but Brown always “hit the door when Daddy did.”

Looking back, Brown laughed and said, “I’m not trying to take anything away from my mom because I’m quite sure she’d of liked to have taught me how to cook and do laundry, but I was going to the field.”

Brown spent her childhood doing chores, going to school, and then heading to the field. Like many farm families, the Brooks didn’t take vacations, but the kids did get a special treat every now and then.

“My dad had a flood control lake,” she said, “and we would irrigate out of it. After we moved pipe, we’d get to go swimming while he was getting the pump started, leveled out or running like it was supposed to.”

When it came to agriculture, John Brooks did it all – from cattle and horses to peanuts, corn, yellow squash and hay.

Brown’s father who was the Hughes County Cattlemen’s Association president for many years had a 150-head cow-calf operation and a pre-conditioning and yearling cattle business. The family baled a lot of hay each year, both for themselves and for others. With such a diversified operation, it was always a family business, but it was more than that for Angela Brooks-Brown.

“When I went off to college, I was like, ‘Well, I’m always coming home to help my Daddy,’” she said.

“I’ve had what I call town jobs, and I couldn’t stand being inside,” she said.

Of course, it wasn’t always so simple, especially when it involved the “get ya cows.”

After the “get ya cow” had squeezed her between the gate and the fence, she’d holler, “Get her off me.”

“He’d look at me like, ‘I know she was just bluffing,’” Brown laughed. “He’d say, ‘We needed a leader in the bunch,’ and I’d say, ‘You brought home a leader last week. We didn’t need two leaders.’”

Brown and her father worked side by side, right up until the day everything changed. He had gone to check his cattle and wasn’t answering his phone.

“He had had a heart attack, sitting out there in the pasture looking at the probably best set of cattle he’d ever owned,” she said. “Who would not want to go that way if you’ve got to go?”

She continued, “I get in the exact same feed truck that he was found in, and I do everything him and I used to do. I’ll probably always live and breathe the J Bar Cattle Company. My dad started it in 1965. I just try to keep on with everything.”

Although the farm is missing a vital piece, Brown continues on with her father’s legacy. She is solely in charge of her dad’s 150-head cow-calf operation. She takes care of the 50 head of cattle owned by her and her husband, Richard Brown. The Browns have two daughters, Jacie and Jody. Angela Brooks-Brown also takes care of Jacie’s 25 cows since she lives out of state. The total operation is about 1,600 acres.

Brown also cuts and rakes hay and does custom hay work for neighbors with the help of her husband and two brothers – Marvin Brooks for mechanics and David Brooks for baling.

“We can water in some places,” she said, “so we can cut it twice. We’re thankful we have rye grass under the pivot that’s coming in now, and we’ll cut it in the spring. Then we’ll cut crab grass off it again in the fall. Of our own hay, there’s probably 300 acres that we’ll put up.”

During the winters, her days revolve around feeding cattle and pasture maintenance.

“Right now, I’m feeding wean calves that we weaned in October,” she said. “We’ll carry them over until sometime in January or February.”

Then, she checks her daughter’s cattle and her father’s cattle.

“I don’t like that it’s getting dark at 5 o’clock because I’m just an outside person,” she laughed. “Usually when I get done with the day, I’ve usually already looked at my husband and I’s cattle by 7 or 7:30.”

Brown checks fences and cuts cedars, paying close attention to fire hazards, especially since the late summer rain gave way to extra foliage. She does nearly all the vet work herself, from pulling calves to sewing up prolapse cows.

“I’m kind of like a jack of all trades,” she laughed. “You’ve got to fix fence. You got to spray weeds. You’ve got to sew up a cow. I change the oil in equipment. I just kind of learned it all. I try to keep the maintenance up on the equipment best I can. There’s others in the family who help if there’s something a little heavier than I can handle.”

She faces challenges every day.

“Some days you get overwhelmed,” she said. “How did this happen? You wake up to disasters. You know those Monday morning things.”

Another obstacle is learning when to change.

“I learned what medicines to use from my dad,” Brown said. “Things change from year to year, so this year some of the medicines that I’ve always used haven’t worked as well as they should. So it’s a big thing to me to figure it out. I think to myself, ‘Did I do something wrong? Do I try something new?’”

People tell her she has a hard job.

“If you love being outside, and you love punching cows, and you love climbing in a tractor and laying down some hay and rolling it up and looking at how pretty that field looks, it ain’t no job,” she said.

Other people wonder how she does it all.

“I just love it,” she said. “I love being outside, driving out through the pasture watching them graze … It just goes back to your soul, or your heart, working side by side. What I’ve learned from him and what he built – it’s a tradition.”

Since her father passed away, her mother goes with her now. It is a special time for the both of them to remember her father and check the cattle herd he worked so hard to build.

“A peace comes over you when you’re driving through a pasture of cattle, and you look around and watch them grazing, or the little babies running and bucking and playing in the sunshine,” Brown said. “And you look and think, ‘Man, God created all that. Or you might go fix fence of an afternoon, and you don’t hear nothing but the birds singing. How could you not love that?”