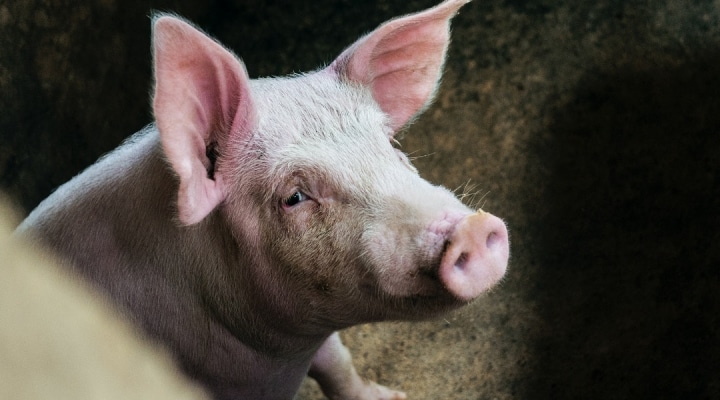 “These projections assume the strong demand observed even in the face of the COVID-19 is maintained. However, if that is not the case or if hog supply turns out to be greater than anticipated, then lower prices may be realized,” said Jason Franken, agricultural economist at Western Illinois University. (Photo by Phoenix Han on Unsplash)

URBANA, Ill. — The USDA’s December Hogs and Pigs report places the Dec. 1 inventory of all hogs and pigs at 77.5 million head, down about 1.2% from last quarter and right at the average pre-report estimate of 1% lower than last year. Similarly, and as expected, the market hog inventory is about 1% smaller than a year ago, according to Jason Franken, agricultural economist at Western Illinois University and contributor to the University of Illinois farmdoc team.

“The numbers seem consistent with previously anticipated herd contraction, which appears likely to continue as the breeding herd, at 3% lower than a year ago, is just below the anticipated range of 1.5% to 2.8% lower,” Franken says. “That’s the smallest breeding herd since early 2018 and the largest decline in the breeding herd since December 2014. These numbers and downward revisions to past USDA estimates for market hog inventory, sows farrowed, and pig crops add some bullish sentiment.”

All except for the heaviest weight class of market hog inventories are down compared to the same time last year, which, Franken notes, is bullish news. The heaviest two weight classes of 120 to 179 pounds and over 180 pounds are about 0.5% and 0.7% lower than pre-report expectations, respectively, while expectations proved fairly accurate for the 50-to-119-pound class and underestimated the under-50-pound inventory by 1%.

“Hence, it appears market-ready supply is somewhat smaller than anticipated. Overall, the number of hogs weighing less than 180 pounds is nearly 2.5% smaller than a year ago, and these will be the market hogs arriving at processing plants from January to May 2021,” Franken says.

“The decline in lighter-weight hogs partly reflects the September-November pig crop is 1.4% smaller than last year with around 1% fewer sows farrowed—which could be viewed as bearish news compared to expectations of 3.5% and 3.7% lower, respectively,” Franken notes. “Those expectations were likely formed based on the prior USDA estimate of 3% fewer sows farrowed for the period, which was revised downward without corresponding revisions to past breeding herd estimates.”

“Still, a smaller fall pig crop, resulting from fewer sows farrowed and fewer pigs per litter, should imply a similarly smaller slaughter this spring, but again, not to the extent expected, given an even smaller pig crop was anticipated,” Franken states.

Meanwhile, winter farrowing intentions are up a little more than 1.5% from actual farrowings last year compared to expectations of 1.8% lower, and spring farrowing intentions are down almost 1% from last year compared to expectations of nearly 1.5% lower. While these numbers should similarly imply somewhat larger and smaller slaughter numbers in subsequent periods, the fact that both estimates are at or above the expected ranges seems bearish, Franken notes.

“Even with strong grocery store demand, uncertainty remains about when restaurant re-openings will occur across the U.S. and how well domestic demand will persist, depending on how long the economy takes to recover from COVID-19. Hence, the market will again look to exports to help bolster prices,” Franken states.

The U.S. exported 589 million pounds of pork in October, or about 13% more than in October of 2019, largely due to shipments to China and Hong Kong. These shipments and strong exports to Canada and Mexico partly reflect trade deals with these countries, which should continue to be important export markets for U.S. pork, Franken notes. Weekly USDA data available through early December appear to support continued strong pork exports. Although export growth is expected to slow to 7.35 billion pounds in 2021, that’s still up about 0.4% from 7.32 billion pounds this year.

“Taking all of this into account, there is the possibility of profitable hog prices, especially throughout the summer of 2021,” Franken states. “The forecast presented here is for the national weighted average net price on a carcass basis for all transactions for producer-sold barrows and gilts, including negotiated and contract prices.

“This net price should be more reflective of what producers receive, on average, and normally runs at a premium of more than $2/cwt over the base price. From September through November, this net price averaged $71.32/cwt compared to $60.07/cwt for the corresponding net prices for negotiated or spot transactions.”

In general, hog prices tend to be higher in the second and third quarter, with lower prices in the first and fourth quarters, Franken explains. Consistent with that pattern, this forecast places first-quarter prices at about $69.25/cwt, rising to $72.38/cwt and $78.72/cwt by the second and third quarters, respectively, before dropping to $67.75/cwt for the fourth quarter.

“These projections assume the strong demand observed even in the face of the COVID-19 is maintained. However, if that is not the case or if hog supply turns out to be greater than anticipated, then lower prices may be realized,” he concludes.

Discussion and graphs associated with this article available here: https://farmdocdaily.illinois.edu/2021/01/significant-revisions-bullish-inventories-and-bearish-farrowing-estimates.html or here: https://uofi.box.com/s/gkv96dvlbz2vsvr4gc889lfmhg5futml