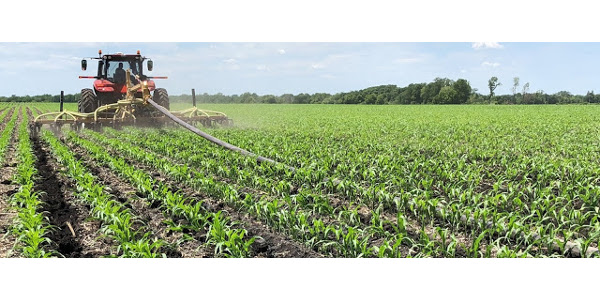 In an on-farm experiment near Le Sueur, Minnesota, we tested several nitrogen sources for sidedressing corn. Our primary goal was to see if finishing swine manure could be used and if it could be applied with a dragline hose system.

Initially, the corn was planted in early May with approximately 40 pounds of nitrogen applied with the planter. We sidedressed the corn in early June in large strips (about 24 rows), when the corn was at about the V4 growth stage. We aimed to get it applied before the growing point of the corn emerged (around V6).

For all nitrogen source treatments, we applied a nitrogen rate of 140 pounds per acre. We also included strips where no nitrogen was sidedressed (the control plots). This was so that we could ensure our nitrogen sources did, in fact, make an impact on the corn.

The first two nitrogen sources included anhydrous ammonia and liquid urea-ammonium nitrate. The third source, finishing swine manure, was applied at around 3,500 gallons per acre with a draghose system and a 12-row applicator.

We had a few issues that we had to work out, but overall we were pleased with the process. And believe it or not, the vast majority of the corn popped back up within a few days after the draghose was pulled over it!

The corn was harvested in mid-October and we used weigh wagons to determine yield. The no-sidedressed-nitrogen control plots yielded about 140 bushels per acre. We were pleasantly surprised to find that the grain yields for all treatments that had nitrogen sidedressed were similar: around 206 bushels per acre, even where swine manure was sidedressed!

Why do this study?

In recent years, the window of manure application has narrowed due to wet or unseasonably cold weather. Sidedressing opens up a non-traditional window of opportunity. We have also heard from some farmers that older-style hog barns no longer have a full year of storage and need somewhere to apply manure in the summer. Studies of sidedressing swine manure into corn in Ohio have shown promising results, so we wanted to test it in Minnesota.

We will repeat this study in a new field in the upcoming growing season. We will also revisit the plots from the first year, which are now in soybeans. Our goal is to see if there are lingering effects of nitrogen sources on the soybeans.

We appreciate the partial funding for this study from the Minnesota Soybean Research and Promotion Council and the Minnesota Pork Board. We are also thankful to Bazooka Farmstar for lending us the toolbar for sidedressing and to Minnesota Valley Pumping Service for applying the manure.