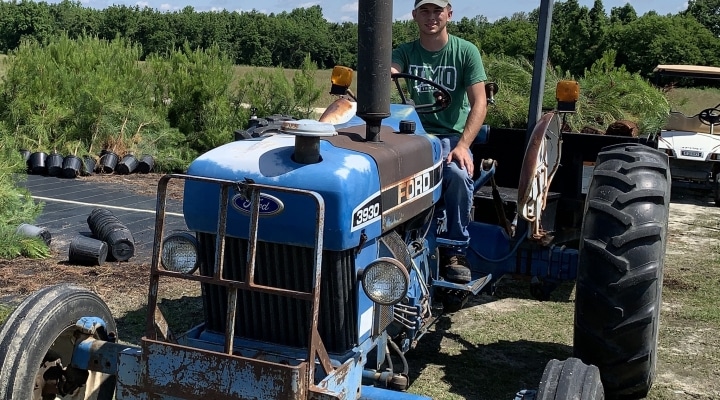 MOUNT OLIVE, N.C. — University of Mount Olive (UMO) junior agricultural productions systems major Sid Gray grew up in Pikeville, NC. As a member of Stoney Creek Free Will Baptist Church, he was very familiar with UMO. After all, it is where both of his parents, Ryan and Stephanie Gray, met and earned their degrees, and where is grandmother, Dianne Riley Gray, worked for many years as Admissions Director and then Alumni Director. However, even with all of that family history Gray’s educational journey to UMO did not follow a direct path.

With Gray’s dad working with the United States Air Force and frequently deployed, Gray and his sister, Ashley, often found themselves helping their mom with chores around the house. At first, working alongside his mom in the garden seemed like just another task to Gray. But, it wasn’t long before the dirt had gotten under more than just his fingernails. Tilling the earth, planting seeds, and watching them grow became a passion for Gray; so much so, that he began to dream of a career in agriculture.

However, just before Gray entered high school, his dad was reassigned to Hill Air Force Base in Utah. Gray completed high school with honors in Utah in 2018. He had always dreamed of attending UMO or NCSU and majoring in agriculture, but he ended up enrolling at Weber State University in Ogden, Utah instead. Without the option of an ag related curriculum, Gray chose to pursue a degree in automotive technology. However, after a year, he found himself miserable at the school, with the program, and with Utah in general. “I longed to go home,” he said.

During a vacation back to North Carolina, Gray visited the UMO campus and talked with the admissions team. “UMO had exactly what I wanted,” he shared. “The sense of family I felt on campus, the love for God, and the care and commitment by the staff members was unlike anything I ever could have imagined. It was completely unlike any other school. I decided to apply and was accepted.”

Gray immediately went back to Utah, and packed his bags for a new adventure at UMO. He now lives with his grandparents, Cliff and Dianne Gray, in Selma, and he commutes to the Mount Olive campus. “I have never been happier,” he shared.

Back in NC, Gray began attending Stoney Creek OFWB Church again, as well as the various services with Live Out Loud Ministries at UMO. “I have been able to find my faith again and I am thrilled to be a part of the Trojan family,” he shared.

Fully immersed in UMO’s Agricultural Production Systems: Outreach and Extension Education program, Gray also interns with Casey Nursery Inc. in Goldsboro, NC. His daily responsibilities can vary greatly. “Some days I am assisting with potting and repotting thousands of plants,” he shared. “Other times I am learning to prune to promote more successful growth, installing bamboo sticks to straighten plants, loading trucks and handling orders to ship across North Carolina and Virginia, or working with the propagator in breeding certain plants.”

Gray is learning all aspects of nursery production. “I am learning how to successfully operate a wholesale nursery,” he noted. “I hope to use my horticultural experience in the future to help people better run their own nurseries and manage more efficient production.”

Through the internship, Gray has developed a deep appreciation for the work involved in growing plants. “I have learned the amount of hard work and perspiration that is needed to grow the trees, shrubs, flowers, and plants that all of us take for granted in our front yard or out in public,” he said. “It’s incredible to see the patience and experience needed to grow these beautiful plants.”

Gray hopes to use the knowledge he is gaining both at UMO and through his internship in his future career. After graduating from UMO in the spring of 2022, he aspires to work for either the NC cooperative extension service or the USDA/ NCDA.

“I am so thankful to UMO,” he said. “I am closer to God than ever, I am happier than ever, I have learned so much during this first year, I am much closer to my family, and I have an incredible internship that will lead to great things in my future. It is all because of UMO, which has changed my life.”

The University of Mount Olive is a private institution rooted in the liberal arts tradition with defining Christian values. The University, sponsored by the Convention of Original Free Will Baptists. For more information, visit www.umo.edu. 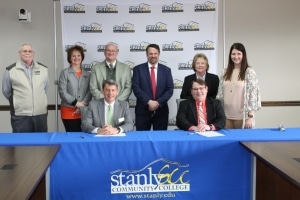 MOUNT OLIVE, N.C. — The University of Mount Olive (UMO) in collaboration with Randolph Community College (RCC) will offer students from Randolph County and the surrounding region the opportunity to complete a bachelor of science degree in multiple agricultural disciplines. Through the agreement, UMO will deliver junior and senior level courses in a hybrid format […]