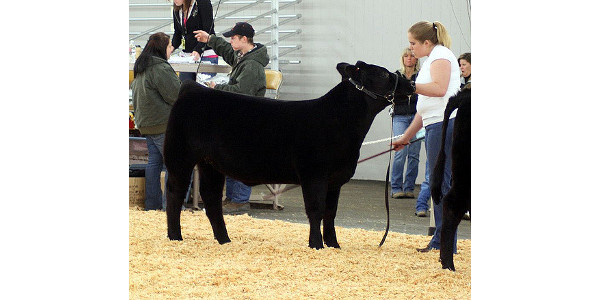 MADISON, Wis. — Kansas juniors took home the top honors at this year’s showmanship contest. Madison Loschke of Kingsdown, Kansas, was named top showman and Cale Hinrichsen of Westmoreland, Kansas, took home reserve honors. Only two showmen and women from each state are selected to compete in the National Junior Angus Show (NJAS) showmanship contest, and juniors can only participate once, making it one of the toughest competitions at the NJAS.

“It’s something that you lay in bed and dream about,” Loschke said. “Showmanship is the crème dele crème in my family.”

The journey to earning one of the coveted silver bowls, which are awarded to the top five showmen, begins in each contestant’s home state, where two juniors are selected as representatives. Then, at the National Junior Angus Show, selected junior members head to the ring to compete for top honors. The preliminary round consisted of four heats on Thursday, July 12, where the top 15 showmen and women were selected.

The finals were held Friday, July 13, where the top five showmen and women were selected. Every year, the top showman at the NJAS is honored with the Dean Hurlbut Award, named after the man who organized the first showmanship competition in 1967.

Jessica Radcliffe, John Griswold and Dan Kiesewetter evaluated the juniors on their skills while handling an animal, their ability to follow instructions, and courtesy and sportsmanship in the showring. Paul Hil served as the surrogate judge.

Radcliffe says she was looking for showmen and women who came to win.

“Today, I would say, was tough,” Radcliffe said. “I know what they’re feeling, and I’ve been in their shoes. It definitely came down to little things and deciphering them. You really had to show that you wanted to win the title of national showman out here.”

The 2018 NJAS in Madison, Wisconsin, celebrated 50 years of tradition and excellence. The week is forever a part of Angus history and set the standard for the next 50 years.

Visit www.angus.org for complete show results and news from the event.