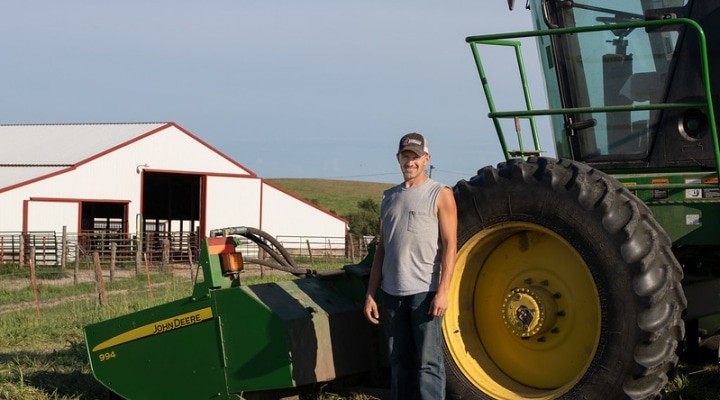 “The biggest thing that I rely on every day is that you’ve got to go out there and put your best foot forward and work hard at what you do, but you’ve got to put your trust and faith in God,” said Jones. (Missouri Department of Agriculture via Flickr)

JEFFERSON CITY, Mo. — Tyler Jones has known his entire life that farming is what he was called to do. Even after attending college and getting a degree, Jones, a fourth generation farmer, returned to the farm to work alongside his family raising row crops and beef cattle in Dawn, Missouri.

“Everybody works together to help each other, and it comes down to working as a team,” said Jones. “You’re never doing the same thing every day. It’s always something new, so you don’t get caught up in doing one thing all the time, so it never gets boring.”

Being able to work together with his grandfather, father and brother-in-law on their operation is a great source of pride for Jones. Their family oriented approach, along with their passion for agriculture, drives their operation’s success.

“Farming is what I grew up knowing and what I grew up doing,” said Jones. “It’s something I knew I was called to do. I couldn’t really see myself doing anything else.”

While Jones knew he wanted to return to the farm, he chose to further his education and gain valuable knowledge both in and out of the classroom.

“The biggest thing that college helped me with was networking and getting to know people,” said Jones. “Farming isn’t just a job, it’s a business and a way of life. Through that, you have to be able to communicate and do business with people.”

When it comes to Jones’ passion for the agriculture industry, Missouri’s diversity of commodities and climate are what sets it apart from the rest.

“Missouri is very much an agriculture based state,” said Jones. “We have everything from cattle, hogs and poultry, to cotton, corn, soybean, milo and wheat. We have a little bit of everything in the state. Missouri does a pretty good job of showcasing that.”

That diversity, however, doesn’t provide immunity from hardships. No matter what types of adversity farmers may face, Jones has his own philosophy to continue working hard each and every day.

“The biggest thing that I rely on every day is that you’ve got to go out there and put your best foot forward and work hard at what you do, but you’ve got to put your trust and faith in God,” said Jones.

Looking forward, Jones is excited to continue his family’s legacy on their farm because it is such a natural fit.

“For me, farming for life is why I came back to the farm,” said Jones. “I knew that’s what I wanted to do. It’s not just a job, not just what I do, it is my life. You do it because that’s who you are, so it only makes sense that you’re farming for life.”