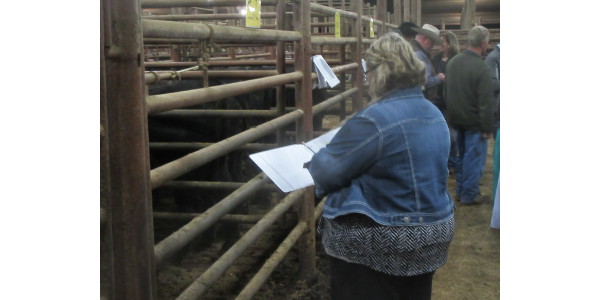 The offering was unique, compared to past SMS sales in southwest Missouri. It included 149 head of popular black and black white-faced heifers plus 164 unique red and red white-faced heifers mostly made up with Red Angus genetics. The two colors sold similarly with the blacks averaging $1875 and the reds close behind at $1862.

The high price for the evening was shared by John Wheeler, Marionville, Marvin Phipps, Cassville and DJV Ranch Edwards at $2200.

The Wheeler group of seven black baldies sold to David Turner, Sarcoxie. The Phipps group of five sold to Jim Huff, McCune, KS. They were AI bred to GAR Prophet, an Angus.

The DJV Ranch was in their first SMS sale, and their five went to Kevin Johnson, Fredericktown. They had the high average consignment at $2133 on their 15 head. Their heifers were GeneMax genomic tested and artificially bred.

There were 63 AI bred heifers that averaged $2019. They were all genomically tested using the Red Angus Herd Navigator test. They sorted the heifers using the genomic test results as a major part of their selection.

For example, the high-selling 12 heifers averaged in the top 10 percent of the Herd builder index. Others were high ranking on yield grade, yield grade and milk, milk, growth and maternal calving ease.

The use of genomic (DNA) testing appeals to a select group of buyers, and they factor that into their decision making. This is the largest number of herds doing the genomic evaluation with five herds testing all or part of their heifers.

The volume buyer at this sale was James D. Miller, Garnett, KS with 23 head of Circle S heifers. Fifty-four percent of the heifers sold to repeat customers including Miller who bought Circle S heifers one year ago.

In addition to the total of 39 heifers going to Kansas, 44 head went to Arkansas, 5 to Oklahoma and 11 to Iowa. The Iowa-bound heifers sold over DV Auction via computer.

An open letter to the Mo. agriculture community
May 28, 2020