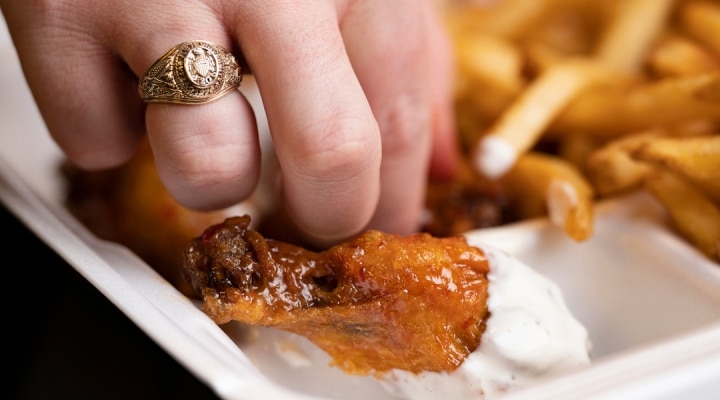 Chicken wings and drumsticks popularity has skyrocketed in recent years, and they are among snack favorites for big games like Super Bowl LVI. (Texas A&M AgriLife photo by Laura McKenzie)

Consumers might see sporadic supplies of specific items, but it’s likely that prices will be somewhat higher at grocery stores, including many traditional Super Bowl items.

The Cincinnati Bengals will play the Los Angeles Rams for the Lombardi Trophy in Super Bowl LVI at SoFi Stadium in Los Angeles on Feb. 13. The game is watched by millions of football fans, and watch parties and get-togethers are widely associated with snacks and cookouts.

David Anderson, Ph.D., AgriLife Extension economist, Bryan-College Station, said wings and drumsticks, a favorite snack for sports fans, should be in steady supply but consumers can expect prices to be higher this year.

The council reported some producers diverted chickens typically marketed as whole birds for parts like wings to meet demand.

Wing and drumstick supplies typically build during the fall in anticipation of peak demand during Super Bowl weekend, Anderson said. Prices typically begin declining after the Super Bowl, but that did not happen last year as demand remained high.

“It highlights the fascination with wings, which are a poultry cut that used to be practically worthless,” he said. “But once someone created buffalo wings and added some ranch dressing or blue cheese, you had something great. Now they’re so popular that more and more restaurants want to capitalize on their sales.”

Anderson said the popularity of buffalo wings parallels with a beef cut that was once considered a cheap cut of meat – the brisket – and the popularity of barbecue. Another parallel beyond high demand and subsequent high prices for both is that production is limited by animal physiology.

“Chickens only have two wings and two drums just like cattle just have two briskets,” Anderson said. “The popularity of these cuts can put a squeeze on supplies because the industry can’t justify higher production based just on the demand for wings or brisket.”

Beyond higher prices on grocery items, Anderson said COVID is still impacting logistics for some food products. He said it might be a good idea to shop early to ensure favorite brands are available for gametime.

For instance, IRi’s supply index shows alcoholic beverages will be running 11%-15% behind stock from now to gameday while other beverages were 13%-14% behind typical supply schedules.

“I went to the store for a specific brand of chips and there weren’t any,” Anderson said. “It took four trips to the store to get a package.”

Anderson said he discovered that particular supply hiccup was due to chip company employees being out sick.

“COVID has exposed a lot of the sensitivities in our food supply chain that relies heavily on near-perfect timing,” he said. “It’s normally remarkably efficient, but one or two factors can throw it out of whack.”

Basketball on a cold winter's night