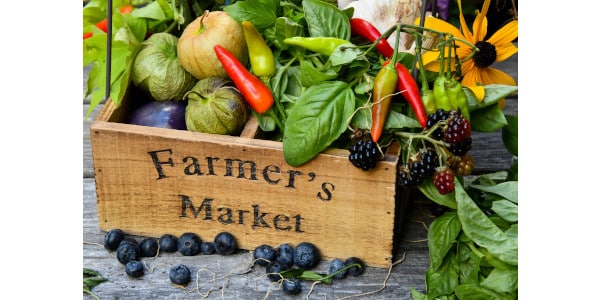 Shop Kansas Farms is a Facebook group that's helping to direct consumers across the country to buy locally grown foods from Kansas producers. (Photo by Shelley Pauls on Unsplash)

MANHATTAN, Kan. — Rick McNary thought he had a great idea when he started an online group to connect America’s consumers to Kansas farm and ranch families.

One year and more than 148,500 members later, it appears he was right.

McNary is the founder of Shop Kansas Farms, a Facebook group that is helping to direct consumers across the country to buy locally grown foods from Kansas producers.

He was a featured speaker July 2 during K-State Research and Extension’s monthly online series, First Friday e-Calls, which helps to nurture small businesses and inspire entrepreneurship in Kansas.

Shop Kansas Farms, he said, was partly inspired by a beef dinner he and his wife had a little more than a year ago.

“We noticed at our local grocery store that the meat counter was empty that day,” McNary said. “It got me to thinking, we just had some great beef (purchased directly from a local producer), so how can I connect people I know with that farmer and the beef they are producing.”

Shortly after, McNary launched Shop Kansas Farms on Facebook and within 24 hours, he had more than 5,000 members. “I felt like a little kid who was walking along a dam, saw a leak and I was trying to plug it,” he said.

Shop Kansas Farms, LLC has since added a website and is helping to connect consumers from across the United States with Kansas products. It has formed connections with another popular program – From the Land of Kansas, managed by the Kansas Department of Agriculture – to help inspire consumer interest in Kansas-grown products.

There are more than 775 farmers selling products on his site. “When I look at that list, I see 775 entrepreneurs,” he said. “To me, the best part of this is that we have stimulated entrepreneurship in Kansas.”

Deb Brown, co-founder of Save Your Town, a consulting business that guides people toward making their small towns a better place to live, said post-pandemic surveys have indicated that a growing number of consumers have become disappointed in the selections at their grocery stores, and are moving toward supporting local farmers.

“96% of those who responded to one survey indicated that locally grown food is the healthiest available in their community,” Brown said.

Consumers’ growing interest in local foods is largely credited for the rise of such popular sites as EatWild.com, GrassRootsCoop.com and ChopLocal.com, among others, she added.

Brown’s and McNary’s full talk and other First Friday presentations are available online from K-State Research and Extension.