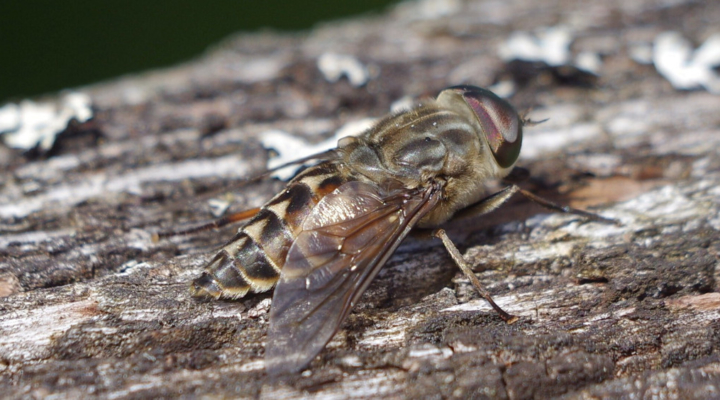 The bites of female horse flies, the feed on large mammals, can be extremely painful. (John Freshney, Flickr/Creative Commons)

COLUMBIA CITY, Ind. — Some flies are nuisances, some are pests, and some mimic bee behavior. Today I’ll cover a few of the common flies we encounter in Indiana, as explained by Purdue University experts.

Small flies and gnats are miniature nuisances. Small flies of concern associated with food include fruit, phorid, moth, and sphaerocerid flies, plus cheese skippers. Typically around 1/8 inch, these flies may be found in moist organic matter, including rotting fruit and vegetables, garbage, drains, or soil contaminated with sewage. Cheese skippers seek out meat and cheese. If you are one who has houseplants, moist potting soil may be a site favorable to fungus gnats. Fungus gnats may resemble a tiny mosquito. Fungus gnat larvae can damage plant roots, and are capable of transmitting fungal pathogens to plants. Inspect newly purchased plants for little gnats flying around before bringing into the home. When repotting, do not re-use old potting soil. Fungus gnats and shore flies can both be problems for commercial greenhouse operators.

Nuisance flies include cluster flies and face flies. Both are medium-size flies, about ¼ inch or larger. Cluster flies are parasites of earthworms, and are strongly attracted to light. Face flies are generally found around cattle farms, and breed in fresh cow manure. Neither of these flies are a problem in structures most of the year, but can work their way into houses in late fall. Some of the flies you clean out of light fixtures may be one of these flies.

Filth flies include house, blow/bottle, soldier and flesh flies. These are all medium size flies, around ¼ inch. All these flies are associated with garbage and filth. These flies are important for the decomposition of animal carcasses, and serve as a food source for many other animals. All but the flesh fly will breed in decaying organic matter. House flies are strongly believed to be capable of spreading disease-causing organisms. These flies generally enter structures from outdoors, originating from sites like dumpsters, trash cans, rodent traps, attics, crawl spaces, or from dead animals.

Black flies and biting midges are annoying little pests that can bite humans. Neither are known to transmit disease agents to humans in the U.S. They can be pests of concern for livestock, poultry and wildlife. Biting midges will also bite pets, and are known by names such as “no-see-ums” or “punkies.” Black flies lay eggs in flowing water, while biting midges lay eggs in moist environments, and need aquatic or semi-aquatic habitats to develop. Only the females bite; males have mouthparts incapable of biting.

The really annoying flies of concern are deer flies and horse flies. I cannot use enough angry adjectives or invectives to express my personal disdain for deer flies. They can be extremely annoying and relentless. The bites of female deer and horse flies (males have weaker mouthparts incapable of biting, and do not feed on blood) are painful.

To date, there is no conclusive evidence that they are capable of transmitting disease agents to humans, with one exception. In the western U.S., there is evidence that suggests a deer fly was involved in transmission of a bacterium that causes tularemia, also known as “deer fly fever” and ”rabbit fever.” Deer flies and horse flies are large flies, ¼ to .33 inches and ½ to 1¼ inches long, respectively. They have mouthparts that include two pairs of cutting “blades” that lacerate skin, causing bleeding that the females lap up. Only females take a blood meal.

Female horse flies feed primarily on large mammals, including their namesake, horses. Female deer flies typically feed on moving hosts, and usually bite on the shoulders and head. Deer flies can also feed on birds and reptiles. Species of both flies tend to develop in natural habitats, and some species may develop in low areas of pastures, standing water in fields, or heavily saturated soils. Unfortunately, there is very little you can do to control or repel deer flies and horse flies. Mosquito repellant doesn’t even work very well. Use clothing and hats to cover exposed skin.

One “actor” in the world of flies is the hover fly. These flies tend to be most numerous in late August and early September. This beneficial yellow and black fly acts like a hovering bee, and some incorrectly identify it as a “sweat bee.” The typical fear of being stung is completely unwarranted, as these flies do not have stingers, nor do they bite. They also wiggle their abdomens up and down after they land, intimidating the novice observer into thinking they are preparing to sting. Hover flies are beneficial because they help pollinate plants, and in their immature stage (larvae), they eat aphids that can be pests on many types of plants.

For more information, access Purdue Extension publications on flies at www.edustore.purdue.edu. The above material was sourced from these publications, written by various Purdue University experts.

Managing common summer pests around the yard and home
July 14, 2021