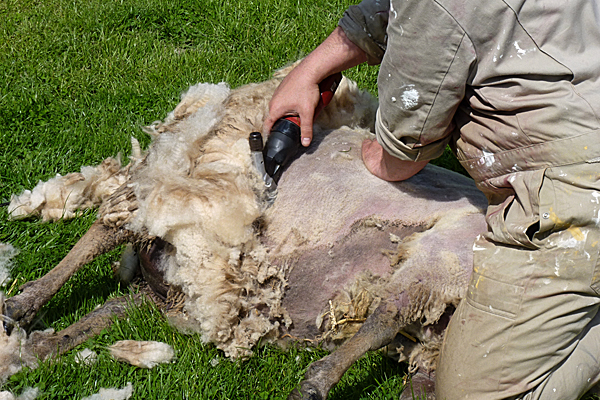 Experts hope there will be more demand for shearers in the state as falling dairy prices shift more farmers from raising cows to raising sheep. (Wikimedia Commons)

DERRY, Pa. (AP) — Chuck Penich plopped a sheep onto its butt between his legs and started buzzing away with a set of electric clippers, slowly working his way from her belly to her legs and back.

Less than 10 minutes later, he had a sheet of wool and an exhausted sheep piled at his feet.

In a good season, he’ll repeat this exercise about 1,500 times at farms across southwestern Pennsylvania. But between his aging back and changing farms, the good seasons are getting worse.

“There was a time I could do 100 a day, but anymore 30 or 33 a day is about all I can do before my back starts hollering at me,” said Penich, 52, of Derry Township. “The biggest reason I keep up with it now is that a lot of the people I shear for aren’t just clients, they’re friends, and you don’t want to let your friends down.”

Penich is part of a shrinking trade in western Pennsylvania, as fewer people take up the shears. He believed he may even be the last shearer in Westmoreland County, as more small farmers do their own shearing or opt for wool-free “hair sheep” for meat.

“It’s hard to get people to shear sheep, particularly a large number of them,” said Bill Truckner, co-owner of Twin Springs Farm in Avonmore, who used Penich as his shearer for many years. “Some people with just two or three sheep will try to do it themselves. … We’ve also had a number of people come out and do a ‘shearing party,’ then sell the fleece to hand-spinners.”

Penich said he has 20 to 25 farm customers left in Westmoreland, Indiana and Fayette counties, and he used to do more in Washington and Greene counties. He also shears goats, llamas and alpacas.

In addition to being sheared so their wool can be spun into fabric and thread, sheep raised for meat still need shearing so they can nurse their lambs, making spring a busy season for both sides of the sheep-farming industry, Penich said.

Penich picked up the skills when he was a student at Derry Area High School, he said. The school’s agriculture program could send students to a nearby program to learn shearing, and one of the students who was scheduled to go was absent. Penich’s teacher drafted him to go instead.

“For a lot of years, it was the side income that became a main income,” Penich said.

Sometimes he worked with partners. But as they passed away or moved on, he took over more of the business.

“Sheep shearing is hard work. If you have to shear 50, 100, 200 in a day, it’s a pretty tiring task,” said Roy Campbell, who runs Derry Area High School’s agriculture program, and whose father was the teacher who steered Penich into shearing.

He said he’s had Penich do demonstrations at the school, but few students are interested in shearing or raising sheep.

Campbell raises his own sheep. He went through the same training program as Penich but didn’t find it as easy — he said Penich’s taller build makes it easier to move and control the sheep — so now he’s among Penich’s customers.

Penich’s daughter also knows how to shear and will sometimes assist him, but she has two children that keep her too busy to take over her father’s customers outright. His son doesn’t shear but helps him to move and control the sheep.

Some farms could hire roving shearers who travel state to state for jobs, but they generally charge more and will contract only for larger flocks; others can buy stands that one can set an animal on for shearing, similar to those found at fairs for touching up show animals, but those make it harder to get wool off in a single, usable piece.

“I’m not sure what’s going to happen once I hang up the shears,” Penich said. “In order for the sheep industry to survive, somebody’s got to take this up.”

Experts hope there will be more demand for shearers in the state as falling dairy prices shift more farmers from raising cows to raising sheep.

Melanie Barkley, an educator at the Penn State Extension’s Bedford County office specializing in sheep and goats, said the university has offered eight sessions over the past year on how to start raising sheep and has gotten about 200 attendees.

“People are leaving the dairy industry. Milk prices are lower than production costs, and we’ve seen a number of folks attending our introductory meetings (for sheep and goat farming),” Barkley said.

Pennsylvania ranks fourth in the country for its number of sheep flocks, but 14th for its actual count of animals — 96,000 sheep/lambs and 15,000 goats, according to the USDA’s 2017 state agriculture overview. That means there are more small farmers here compared to the huge flocks in Western states, Barkley said. The average flock in Pennsylvania is 26 sheep, she said.

“I think we’ve seen (a decline in the number of shearers) for quite a few years but think if there are more folks getting into the sheep business, we’ll see more shearers seeing they can make some money off of it,” Barkley said.

The Penn State Extension offers two sheep-shearing classes a year: one course in Washington County every May, and another on Penn State’s campus in late August or early September, said Walt Bumgarner, the extension educator who helps run the Washington County sessions.

The university can offer only 12 slots per two-day session because they have a limited number of clippers for students to learn on. For the past few years, the Washington County sessions have consistently been full, Bumgarner said. But attendees generally have been small farmers learning enough basics to shear their own flocks, not people looking to do it for a living, and many find it’s still too difficult.

Penich said it can take up to 300 shearings to master the cuts and produce a good fleece.

The spring shearing workshop, to be held May 4 in Scenery Hill, is $90, according to Penn State’s website.

“The people we get have a few heads (of sheep) and just want to be able to do it because they can’t find anyone else … or else they come, find out how difficult it is and they want to touch base with someone to do it for them,” Bumgarner said. “They’re wanting to find out about the basics. We don’t have a whole lot getting trained to make a business of it.”