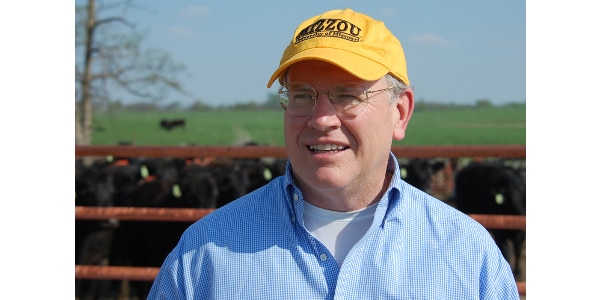 David Patterson, a Chancellor’s Professor in the MU College of Agriculture, Food and Natural Resources (CAFNR) Division of Animal Sciences and state beef Extension specialist, has earned numerous awards and honors throughout his distinguished career. His most recent honor came this summer, when he was named an American Society of Animal Science (ASAS) Fellow. (Courtesy of University of Missouri)

COLUMBIA, Mo. — For nearly 25 years, David Patterson has helped Missouri cattlemen get the most out of their beef cattle operations. Patterson piloted the Show-Me-Select Replacement Heifer Program early in his University of Missouri career. The program has now enrolled more than 150,000 heifers on more than 900 farms – and contributes more than $3.5 million annually to the Missouri economy.

Patterson, a Chancellor’s Professor in the MU College of Agriculture, Food and Natural Resources (CAFNR) Division of Animal Sciences and state beef Extension specialist, has earned numerous awards and honors throughout his distinguished career. His most recent honor came this summer, when he was named an American Society of Animal Science (ASAS) Fellow.

“It is an honor to be named a Fellow of the American Society of Animal Science,” Patterson said. “The society has been an important part of my career, and it’s really exciting to receive this award.”

ASAS was created in 1908 and has supported both scientists and animal producers across the globe. Patterson’s ASAS Fellow honor came in the Extension category, which recognizes an individual who has given prominent service to the animal industry and had continuous membership in ASAS for at least 25 years.

With decades of success under his belt with the Show-Me-Select Replacement Heifer Program, Patterson is now lending his expertise to the National Center for Applied Reproduction and Genomics (NCARG) in Beef Cattle. The goal of NCARG is to promote the economic impact of the technologies Mizzou animal sciences faculty have developed and are using every day. The focus is on giving farmers and ranchers the answer to the question – “What is the return on investment if I invest in reproductive or genomic technologies?”

A $300,000 grant from the United States Department of Agriculture (USDA) National Institute of Food and Agriculture (NIFA) in 2018 got NCARG off the ground. The multi-disciplinary grant is in partnership with the MU College of Veterinary Medicine. NCARG has a big focus on continuing education for veterinarians, including educational and training opportunities for veterinary students, graduate students, farmers, ranchers and allied industry professionals.

Patterson is currently working on securing more funding and partnerships for NCARG.

“Our reproductive and genomic research is so closely tied – and both are great strengths within the Division of Animal Sciences,” Patterson said. “A center of this nature was the logical next step for our division. With beef cattle, there is so much technology that could help operations. We want to help transfer that technology to industry participants at all levels.”

Patterson, a native of Montana, completed his bachelor’s and master’s degrees at Montana State University, with research for his master’s degree conducted at the USDA Livestock and Range Research Laboratory in Miles City, Montana. He received his PhD from Kansas State University. Before joining Mizzou, Patterson was the state Extension beef specialist in reproductive physiology at the University of Kentucky. Patterson has received funding for the past 20 years from the National Institute of Food and Agriculture (NIFA) Competitive Grants Program to support his research and Extension programs. During his career, he has produced more than 600 referred journal articles, scientific abstracts, proceedings papers and presentations at the state, regional, national and international levels.

Patterson’s research efforts gained wide industry acceptance over the course of his career, resulting in new strategies to synchronize estrus and ovulation in postpartum beef cows and replacement beef heifers, supporting the adoption of fixed-time artificial insemination. Patterson was a founding member and Chair of the Beef Reproduction Task Force, a group formed at the turn of the century providing scientific-based recommendations for the application of reproductive technologies to the U.S. beef cattle industry.

The Show-Me-Select Replacement Heifer Program is one of CAFNR’s seven Programs of Distinction, a select collection of programs that exemplify CAFNR’s drive to distinction. Those programs define CAFNR’s current impact on Missouri’s agriculture and natural resource economies, providing understanding for how CAFNR is addressing challenges facing Missouri agriculture and natural resources.