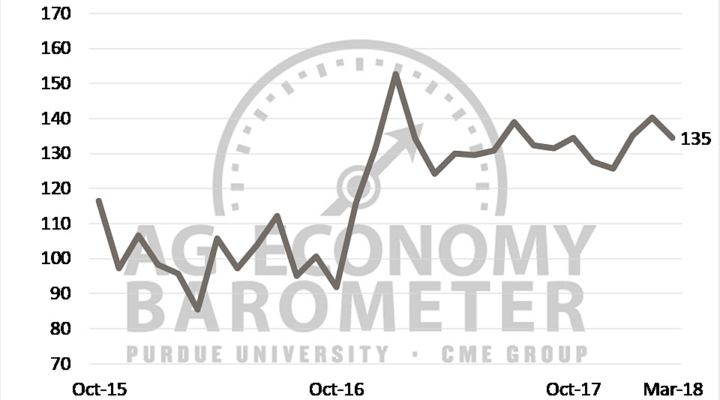 The 5-point decline in sentiment comes as a result of producers’ less-optimistic perceptions of both current conditions and future expectations. The Index of Current Conditions fell 9 points in March to 134, while the Index of Future Expectations dropped by 4 points to 135. The barometer and both sub-indices are based on a monthly survey of 400 U.S. agricultural producers.

On the March survey, producers expressed both concern and uncertainty surrounding trade. Nearly half (47 percent) of respondents said that a trade war negatively impacting agricultural exports was somewhat likely, compared with just 28 percent who thought it was unlikely. The remaining 25 percent indicated uncertainty with a neutral rating.

Producers also were asked about the likelihood of a U.S. withdrawal from the North American Free Trade Agreement. More than one-third expressed uncertainty, while 28 percent expected the U.S. to remain in NAFTA and 34 percent said they expect the U.S. to exit the agreement.

“Interestingly, when comparing results from the two trade questions, a larger share of respondents reported a significant decline in agricultural exports from a trade war was more likely than the U.S. withdrawing from NAFTA,” said James Mintert, director of Purdue University’s Center for Commercial Agriculture and principal investigator on the barometer project. “These results are important for two reasons. First, nearly half of producers rated the risk of a trade war as at least somewhat likely. Second, producers’ concerns about risks to agricultural trade are broader than just the ongoing NAFTA situation.”

“Concerns about agricultural exports, especially as they relate to Chinese tariffs on U.S. ag products, could be one reason why fewer producers said now is a good time to make large farm investments,” he said.

Read the full March Ag Economy Barometer report at http://purdue.edu/agbarometer. The Ag Economy Barometer, Index of Current Conditions and Index of Future Expectations are available on the Bloomberg Terminal under the following ticker symbols: AGECBARO, AGECCURC and AGECFTEX.