Home » Senior gets a 'kick' out of PSU Horse Barn living 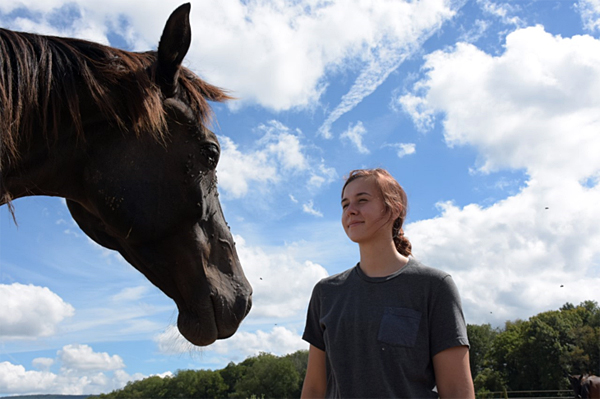 Paulina Oleinik, a senior in Penn State's College of Agricultural Sciences, is one of the live-in employees at the Penn State Horse Barn. (Penn State)

UNIVERSITY PARK, Pa. — When Paulina Oleinik, a senior in Penn State’s College of Agricultural Sciences, started her college career at the University’s Altoona campus, she had no idea that one day she would call a horse barn her home.

Oleinik and four other students are live-in employees at the Penn State Horse Barn. The on-campus horse farm is home to approximately 70 American quarter horses and an active breeding facility, which raises about 20 foals per year and trains them for sale by the time they reach two years of age.

Oleinik, of Chesterfield, N.J., is majoring in animal science with minors in equine science, international agriculture and German. She began working at the barn in the summer of 2017 but is new to the live-in position. She moved in last fall and said she is more than thrilled to have the opportunity to be even more involved in the horse program.

“As a freshman, I didn’t even realize Penn State had such extensive livestock facilities,” Oleinik said. “Living at the barn has been the best experience of my life; that may sound like an exaggeration, but it really is true.”

She explained that Penn State-raised horses are used in classes for the equine science minor and for research projects. Horses born at the farm also make great pets for people with a wide variety of equine interests, and many also have gone on to show extensively. Along with the five live-in students, there are six other student employees and two full-time managers who are responsible for the care of these horses.

Oleinik said she has gained invaluable experience from this job. From working hands-on with young horses, to giving treatments to sick animals, to helping with the collection of stallions and insemination of mares — every day at the barn offers a new lesson.

She added that there is more responsibility that comes with living and working at the barn, but she is up to the challenge.

“We had a very sick weanling over the fall semester, so we all were up every few hours to check on her,” she said. “It was one of the more emotionally taxing things I’ve had to deal with, but it gave me a new perspective on the kind of work that goes into a breeding farm.”

On a lighter note, Oleinik noted that she loves being able to step out of her room and see the horses — even if they do “like to bang on their feed buckets at four in the morning.”

For Oleinik, working with her fellow students is rewarding as well.

“People ask me all the time what it’s like living and working at the barn and how they can get involved with our program,” she said. “One of my favorite things is interacting with these students who share a passion for the equine industry.”

Oleinik is no stranger to spreading the word about the college or sharing her passions with fellow students. First as a Lion Ambassador, then as an Ag Advocate, she has worked with potential students who are interested in becoming part of the College of Agricultural Sciences.

One of her favorite parts of being an Ag Advocate is meeting people from all over the country and informing them about everything the college has to offer.

“Students who give tours have an impact on whether students want to come to a university or not,” she said. “When I was touring colleges in high school, if a student gave a bad tour, I really lost interest in that school. It’s a big responsibility representing the entire college, but it’s something I’m proud to be a part of.”

With graduation at the end of the semester, Oleinik is preparing for the next step in her life: attending law school. With 10 applications submitted, she is hoping to be accepted to Cornell Law School, where she can embrace another one of her passions: international agriculture. The program would allow her to study law in Germany for a year. She eventually would like to live in Europe and practice international law, with a focus on animal and agricultural law.

Her interest in international agriculture has been fostered by her study-abroad experiences. She participated in a 10-day trip to Paris as part of a course titled, “Comparing Agricultural and Food Systems in the U.S. and France.” The students toured locations such as Champagne vineyards, an agricultural high school, the Rungis International Market, the King’s Kitchen Gardens in Versailles, the French National Institute for Agricultural Research and an Organic Farm Share Program.

“Sometimes it’s easy to forget, but agriculture isn’t an industry limited to the United States; it’s everywhere and it’s different everywhere,” she said. “France was amazing culturally, but I learned so much from its agricultural systems, too.”

Oleinik is working hard to attain her dream of law school, and she advises her fellow students to work hard to reach their dreams, as well.

“Most successful people have had to deal with denials and setbacks in their lives,” she said. “My mom always says you can cry about it today, but tomorrow you have to keep going. I’m trying to see the new possibilities behind every ‘no.’ My dreams and goals aren’t going anywhere.”