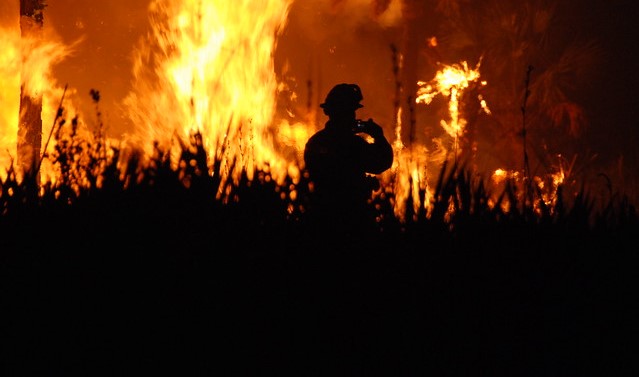 Democrat Dianne Feinstein of California and Republican Steve Daines of Montana told The Associated Press they will introduce the bill after the Senate's August recess, but wanted to announce their plans now as the western U.S. states enter their peak fire season. (U.S. Fish and Wildlife Service Southeast Region, Public Domain)

HELENA, Mont. (AP) — Senators from California and Montana said Thursday that they plan to introduce a bipartisan bill that aims to protect communities from wildfires like the one that killed 85 people and destroyed much of the Northern California town of Paradise last year.

Democrat Dianne Feinstein of California and Republican Steve Daines of Montana told The Associated Press they will introduce the bill after the Senate’s August recess, but wanted to announce their plans now as the western U.S. states enter their peak fire season.

“Unfortunately, millions of acres of forests in our states and across the West remain at high risk of catastrophic wildfires, and there is strong consensus that fire seasons will only get worse,” Feinstein and Daines said in a statement obtained by the AP. “We believe additional resources are urgently needed to protect our communities and tackle these emergency conditions.”

Fire seasons have grown longer and more intense in recent years in the West because of hotter, drier weather and widespread tree deaths due to insects and disease.

In 2017, a flash drought led to a record 2,200 square miles (5,665 square kilometers) being burned in Montana. The state’s portion of the $400 million firefighting price tag, some $74 million, nearly busted the state’s budget and forced lawmakers into a special session to fill the gap.

Officials estimate last November’s devastating Paradise fire burned nearly 15,000 homes. The town lost over 90% of its population in the aftermath.

Daines and Feinstein have been working on forest management reform proposals for several years, and the Paradise tragedy may be what pushes the legislation through a divided Congress, Daines said. He called the bipartisan effort a breakthrough.

“We have a strong friendship and we’ve worked together on other issues,” Daines said of his relationship with Feinstein. “Both of our states are dealing with serious wildfire issues, and particularly public safety issues.”

The fire in Paradise, the nation’s deadliest in nearly a century, and 18 more in California in 2017 were caused by Pacific Gas & Electric Corp. power lines, investigators concluded.

Daines’ and Feinstein’s legislation will include provisions to expedite logging, the removal of dead and dying trees and other preventive fire treatment projects around roads, trails and transmission lines, such as those that caused the fire in Paradise.

It will also seek to slow or stop lawsuits that block logging projects on federal land. Daines spokeswoman Katie Schoettler did not provide details but said the bill would address a past 9th U.S. Circuit Court of Appeals decision on how federal agencies consult with each other on forest management plan updates, a ruling that has been the basis of several lawsuits by conservation groups.

Daines and other Montana leaders say those groups have abused the legal system by filing frivolous lawsuits to stop logging projects in national forests. The groups contend the logging projects have the potential to harm the habitat of threatened and endangered species, such as the Canada lynx.

The bill also would prioritize large-scale forest management projects in California and Montana, such as the removal of dead and dying trees, and encourage the Forest Service to speed up restoration and reforestation efforts on burned land.