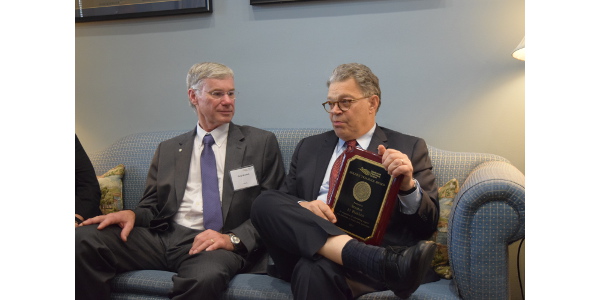 Klobuchar and Franken were among 33 U.S. Senators and Representatives who have demonstrated leadership and support at the federal policymaking level for family farmers, ranchers and rural communities. Representatives from Minnesota Farmers Union presented the awards to them in Washington.

“The Golden Triangle Award recognizes farm and food champions in Congress that display outstanding leadership on the issues that are important to both our industry and our organization. We’re appreciative of their insight and devotion to securing the nation’s food supply for the good of both American family farmers and consumers,” said NFU President Roger Johnson.

The Golden Triangle, first presented in 1988, symbolizes the core principles of the Farmers Union organization: education, cooperation and legislation. This year’s Golden Triangle honorees were selected for their leadership and dedication to improving the livelihoods of family farmers and ranchers.