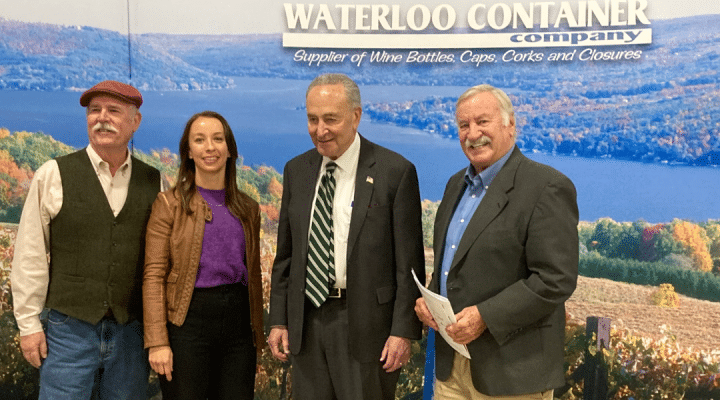 The USPS Shipping Equity Act would allow the postal service to ship wine (and beer, and spirits) directly to consumers like FedEx and UPS have been doing for years. Federal funding for the National Agricultural Statistics Service (NASS) of USDA to conduct a national vineyard survey would fill a huge information gap in assessing the true economic impact of the American grape and wine industry.

US Senator Charles Schumer said, “New York’s wine industry is an economic powerhouse, and I’ve been proud to secure critical advances to grow this industry to new heights.  From securing funding to build the new USDA Grape Genetics Research Unit lab in Geneva, NY and making the Craft Beverage Modernization and Tax Reform Act permanent, to my support of the industry throughout the pandemic in the Coronavirus Food Assistance and EIDL programs, I have long been an ardent supporter of New York’s wine industry. It was a pleasure to visit with industry leaders at Waterloo Container to discuss firsthand the fruits of our labors to further cement New York’s role as a worldwide leader in wine production.”

“We are truly honored that Leader Schumer took time out of his incredibly busy schedule to meet with us,” said WineAmerica President Jim Trezise. “The night before, he had attended the White House state dinner with French President Emmanual Macron after getting the Senate to vote on averting a potentially catastrophic rail strike and passing the historic Respect for Marriage Act. And yet he still makes time for us. That is truly representative democracy.”

When he was first elected to the Senate 24 years ago, Leader Schumer vowed to visit all 62 New York counties every year, and he has kept that promise. Waterloo Container is in Seneca County in the town of Waterloo, adjacent to Seneca Falls, the birthplace of Memorial Day and home of the Women’s Rights National Historical Park.

“We are so fortunate to have Chuck Schumer as our Senator, and the Majority Leader, because he truly does represent the people of New York State,” said Bill Lutz, President and Owner of Waterloo Container, a family-owned business that employs 80 people and distributes wine bottles nationally. “His long and strong support of the wine industry has meant that we have been able to thrive as it grows, which in turn means we can employ more people who in turn support our local community. It’s an upward economic spiral”.

Jim Trezise presented the Senator with an infographic on the wine industry’s impact in New York State–a total of $14.9 billion, with 470 wineries, 92,371 jobs, $5.6 billion in wages, 5.6 million tourist visits, $1.9 billion in tourist expenditures, and nearly $1.6 billion in total taxes. The wine industry’s total economic impact on the national level is $276 billion, 25% above the $220 billion in 2017 based on two studies commissioned by WineAmerica and conducted by John Dunham & Associates, a prominent economic research firm focused on public policy.

Senator Schumer has supported the wine industry in many ways over the years. He recently advocated for the TTB’s adoption of additional sizes of cans in order to make wine in cans more economically feasible. He has always supported funding for the Market Access Program to promote the export of American agricultural products including wine as well as major funding for research, including for a USDA grape genomics facility in Geneva, NY. And as a true New Yorker, he got New York wines served exclusively at the 2013 Inaugural Luncheon of President Barack Obama. Incidentally, with Rep. Hakeem Jeffries the future Democratic leader in the House starting in January, two Brooklynites will play key leadership roles in Congress.

“Senator Schumer has been to my winery several times, and he always checks in on how we’re doing and how he can help,” said Fox Run co-owner Scott Osborn. “He listens, he cares, and he acts.”

WineAmerica is the National Association of American Wineries headquartered in Washington, DC, with a focus on grassroots public policy advocacy at the federal level to protect and enhance the business climate for the American wine industry. The organization also includes a State and Regional Associations Advisory Council (SRAAC) of winery trade association leaders from around the country, and represents over 400 members from 46 states. 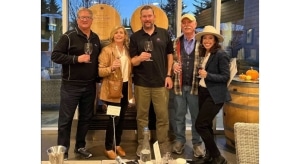 WASHINGTON — WineAmerica, the National Association of American Wineries, recently installed new members on its Board of Directors and discussed the outlook in Washington heading into 2023. The annual Fall Retreat, this year held at Chateau Ste. Michelle in Woodinville, Washington on November 14-15, also included updates on the organization’s membership, government affairs activities, and […] 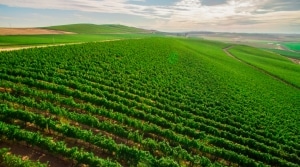 WASHINGTON — The wine industry will generate more than $276 billion in economic activity for the American economy in 2022, according to a new study unveiled in Washington by Representatives Mike Thompson (D-CA) and Dan Newhouse (R-WA), Co-chairs of the Congressional Wine Caucus. The study was conducted by John Dunham & Associates, a prominent economic research firm, and […]