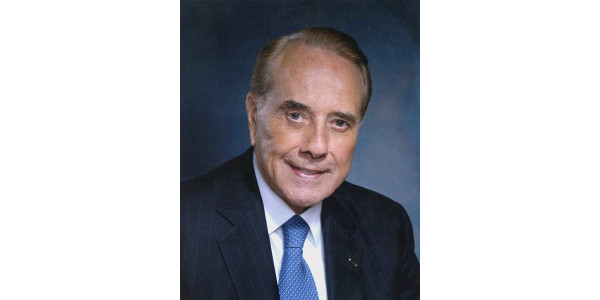 The Kansas Association of Wheat Growers couldn't be prouder to call Senator Dole a friend and a colleague.

MANHATTAN, Kan. — A crowd quickly begins to assemble in the Pride of Kansas building at the 2015 Kansas State Fair. To the right is the state’s largest pumpkin grown that year; to the left are the best grain samples produced by Kansas farmers. But in the middle, under a sign playfully labeled “Old-timers” sits Bob Dole with his friend and colleague Nancy Landon Kassebaum.

The crowd is focused in a single file line, young and old, gathered to meet these Kansas legends. Men and women approach one-by-one to greet Senator Dole and regale him with memories of meeting him on a class trip to D.C., thanking him for his service in the armed forces and for his statesmanship in Congress, asking him if he may remember a long-lost mutual friend, or even if he might have some insight into the next presidential election. As the people filter out, you hear exclamations like, “He’s still as sharp as a tack,” or “Remember this. We’ll never see another politician like him again.”

Senator Dole’s placement amongst the best agricultural products in the state was a strategic and logical choice. He has been a friend to Kansas agriculture during his time on the national political scene, and he remains as revered in the hallowed halls of the Capitol as he is on the wind-blown plains of Kansas.

The wheat farmers of Kansas have a particular fondness of Senator Dole. He fought for common-sense agricultural policy, including the landmark 1985 Farm Bill.

The 1980s was a decade of uncertainty for the American farmer. Inflation, climbing interest rates and pushback from a nation that did not understand the need for increased federal farm aid were looming over family farms. Senator Dole, with input from bi-partisan colleagues, negotiated the landmark bill that cut costs while keeping the much-needed farm subsidies intact.

In addition, Senator Dole has been a champion for foreign market development and international food and nutrition programs throughout his entire career. The Bread and Butter Corps was a program introduced to the Food for Peace Act by then Representative Dole in 1966. This program ensured that volunteers would train farmers in developing countries, while still exporting America’s surplus grain to nations in dire need.

The Food for Peace program remains an essential market, both for American farmers and its recipients around the world. In 2015 more than a third of all American exported commodities were provided through the Food for Peace Program.

In addition, Senator Dole has tirelessly worked toward a food-secure future for children, both at home and abroad. He helped to reform the food stamp program, create the Women and Infant Children (WIC) nutrition program, develop the Temporary Emergency Food Assistance Act and expand the National School Lunch Program.

Even in his retirement, Senator Dole has worked toward ending global hunger. He continued his legacy of bi-partisanship in 2002 with his friend and fellow retired U.S. senator, George McGovern. Together, they created the McGovern-Dole International Food for Education Program (FFE), an innovative model of food aid that combines food commodities, technical assistance and cash to provide for hungry children at schools around the world. This program has increased enrollment at program schools by 14 percent overall, with a specific 17 percent bump for female students. While feeding the future is an important goal for developing countries, the program has also benefited farmers at home. More than 4.4 million bushels of U.S. wheat were exported for the FFE program in 2015 alone.

Growing up in the Heartland instilled hard work, innovation, determination and eternal optimism in Senator Bob Dole. He used these attributes to give back to his native home and to improve America’s most basic industry, agriculture.

As Senator Dole once said in his autobiography, Unlimited Partners, “If you don’t eat, you don’t need to worry about the farmer. Otherwise, his problems are at least in part your problems, too.”

The Kansas Association of Wheat Growers couldn’t be prouder to call Senator Dole a friend and a colleague. We support H.R. 3332, the Bob Dole Congressional Gold Medal Act, and its Senate counterpart, S. 1616. Please support this legislation to properly recognize a great Kansan and great American.

WOODLAND, Calif. — Dole Food Company Vice President Food Safety and Quality Natalie Dyenson is frank about the two-sided coin that motivated her company to contribute $750,000 to Center for Produce Safety’s (CPS) new capital fundraising campaign: much is at stake, and much can also be gained. “The produce industry has been challenged by a […]