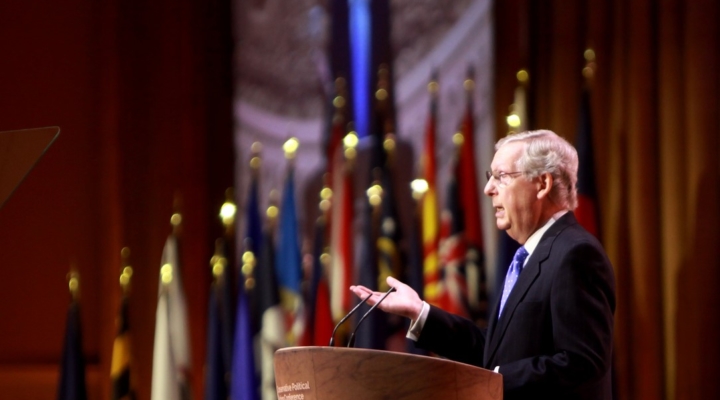 "Right now, hemp is all over the place, it's just coming from somewhere else," Senate Majority Leader Mitch McConnell said Thursday. "My goal is to end that absurdity." (Gage Skidmore, Flickr/Creative Commons)

LOUISVILLE, Ky. (AP) — Senate Majority Leader Mitch McConnell calls it an “absurdity” that the U.S. imports hemp but puts severe restrictions on American production. The Kentucky Republican is looking to change that by legalizing the crop in the next federal farm bill.

McConnell toured a hemp processing plant in his hometown of Louisville on Thursday, and then touted his proposal to bring back hemp as an agricultural commodity by removing it from the controlled substances list that currently associates the crop with its cousin — marijuana. Hemp and marijuana are the same species, but hemp has a negligible amount of THC, the psychoactive compound that gives marijuana users a high.

McConnell’s proposal was included in the Senate-passed version of the farm bill.

The measure next goes to a House-Senate conference committee. Hemp language wasn’t included in the House measure, but McConnell was upbeat Thursday about the prospects that his hemp proposal will be part of the final product in coming months.

“I’m optimistic that we’ll be able to finish the job,” he told reporters.

Kentucky has been at the forefront of hemp’s comeback. Hemp got a limited reprieve with the 2014 federal farm bill. McConnell helped push for a provision that allows state agriculture departments to designate hemp projects for research and development. As a result, the versatile crop has been grown on an experimental basis in a number of states in recent years.

The crop was historically used for rope but has many other uses, including clothing and mulch from the fiber; hemp milk and cooking oil from the seeds; and soap and lotions. Other uses include building materials, animal bedding and biofuels.

In Kentucky, 210 farmers are growing thousands of acres of hemp this year, and 72 Kentucky processors are helping turn the raw product into a multitude of products, said Kentucky Agriculture Commissioner Ryan Quarles.

A few years ago, hemp’s connection to its illicit cousin made it a challenge when pitching the crop to lawmakers, McConnell said. Those challenges have faded, he said.

“Now, I think everybody kind of gets it, that this is a different plant,” McConnell said.

But the vast majority of hemp is imported into this country. U.S. law allows the importation of hemp fiber and processed seeds as well as finished hemp products, according to the hemp advocacy group Vote Hemp. More than 80 percent of hemp products sold in the U.S. are imported, it said.

“Right now, hemp is all over the place, it’s just coming from somewhere else,” McConnell said Thursday. “My goal is to end that absurdity.”

The U.S. hemp market has grown at a double-digit pace, according to Vote Hemp. The total retail value of hemp products sold in the U.S. was at least $820 million last year, it said, citing research by Hemp Business Journal.

Brian Furnish, an eighth-generation tobacco farmer in Kentucky, said Thursday that his family farm will make more money from hemp than tobacco. Last year, his hemp crop cleared about $2,500 an acre on average, more than he got from tobacco or grains.

Legalizing the crop would lure more farmers and processors who are “still sitting on the sidelines,” he predicted.