Home » Selling lambs or goats? AgriLife has an app for that 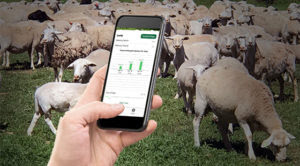 “This app addresses the basic question producers face: ‘Should I sell them now, or do I retain ownership and sell them a little bit later down the road? And if I do wait, what would be my reasonable expectations for change in value?’” said Bill Thompson, AgriLife Extension economist, San Angelo.

Using eight years of statistical data, the app helps optimize gross revenue per head based on the time of year, animal weight and cost of gain.  It also provides current market values. Although there are many apps for cattle producers, this app is the first of its kind for lamb and goat producers, said Thompson.

The Lamb and Goat Market Forecast app started as an interactive excel spreadsheet that Thompson and Redden developed as an online tool for people to determine the ideal market weight. That idea inspired Waldron who suggested if an assumption could be made about the amount of weight an animal would gain, then a statistical matrix could be created that would predict what the change in relative value would be from month to month –  assuming an industry standard rate of gain.

The team used more than 1 million data points of market information for lightweight slaughter lambs and kid goats sold at the Producers Livestock Auction in San Angelo to create the app. The database includes over 667,000 lamb and 631,000 goat sales. ASU students, led by ASU IT applications support specialist Jason Watson, incorporated the prediction matrix into an app.

The app allows you to predict the change in value of an animal as it gains weight, and  it allows ranchers to input their own cost of gain, as this is highly variable given feed resources available, said Redden.

“Livestock producers commonly brag about what they got per pound when they sold an animal, but the real take home is how much per animal did you get,” Redden said.  “For example, many people think the best time to sell lambs is at 55 pounds, but the app shows you in one example that if you waited a month and went up to 70 pounds it could have added an extra $30 of revenue per animal.”

Given the seasonal and other fluctuations of the lamb and goat market, having over a million data points that cover market sales since 2010 is enormously beneficial to area producers, explained Thompson.

“We realized after talking with IT that we could simplify the output of the app by incorporating a slider bar for the estimated cost per pound of gain, ” said Redden. “People talk about wanting to get the most per pound out of their animals and this allows them to see what going up in weight will net them as well as how costs will affect the returns on the heavier animals.”

The app allows users to select if they want information on sheep or goats,  then a series of easy prompts guides users through the process. The cost of gain slider bar allows users to see the effect of costs on the marginal revenue bar graphs.

For more information on the app’s features and how to best utilize it, visit https://sanangelo.tamu.edu/extension/west-central-agricultural-economics/lg-market-app/.