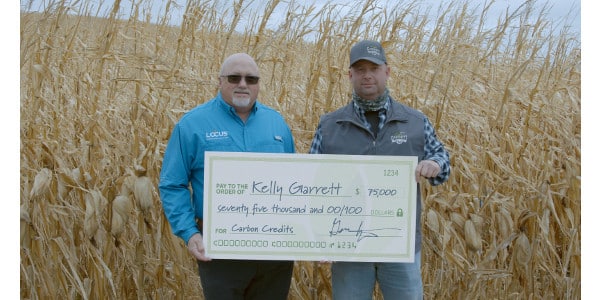 The carbon credit payments rapidly reward farmers for their efforts in fighting climate change and provide a new revenue stream that can double profits to improve financial security amid a challenging year.

Buyer: Shopify
Shopify is a leading global commerce company, providing trusted tools to start, grow, market and manage a retail business of any size. The plans to purchase will make Shopify the first corporate buyer of carbon credits from a U.S. CarbonNOW farmer, and will be the first high-volume transaction in Nori’s carbon removal marketplace. It is part of Shopify’s recently announced $5 million investment in breakthrough sustainability technologies.

“Shopify is committed to supporting solutions that are already actively fighting climate change, such as carbon farming practices,” said Stacy Kauk, Director of Shopify’s Sustainability Fund. “Despite challenges, farmers like Kelly Garrett continue to do the right thing for our planet and we’re proud to be supporting their ongoing sustainability efforts.”

Purchase: Carbon Credits
Unlike carbon offsets which avoid carbon emissions released into the atmosphere, carbon removal credits are generated by actions that actively pull carbon dioxide out of the atmosphere to reverse the impacts of climate change. One credit is given for each metric ton of CO2 equivalents removed. Once these credits have been verified by third parties, they are made available for sale through carbon removal marketplaces like Nori.

Carbon Marketplace: Nori
Nori’s marketplace focuses on negating carbon footprints through carbon removal by paying farmers for carbon pulled into and stored in soil. Unlike other carbon credit marketplaces which offer future payments, transactions in Nori’s marketplaceprovide rapid compensation to farmers.  Early adopting farmers participating in Nori’s pilot can be compensated for carbon removed as far back as five years ago.

“Reversing climate change requires more than just offsetting carbon emissions—we must remove carbon from the atmosphere and agriculture is one of the most powerful tools in doing so,” said Alexsandra Guerra, Director of Corporate Development at Nori. “By providing financial incentives to our country’s farmers for their conservation practices, we can make carbon removal a realistic revenue stream, maximize environmental impact and support one of the more important U.S. industries.”

Program: CarbonNOW™
Developed by B Corp™ Locus AG, CarbonNOW is a globally recognized program that leads farmers through the carbon credit process. It also offers them access to award-winning soil “probiotic” technology that maximizes earnings by increasing the amount of carbon sequestered, minimizing nitrous oxide emissions and decreasing fertilizer while growing more food per acre.

Deemed a world-changing idea and top environmental project in the U.S., CarbonNOW has a proven ability to feed a growing population, boost climate change efforts and improve the livelihood of farmers and their rural communities. Farmers have lined up hundreds of thousands of acres to participate in the program and utilize Locus AG’s expertise in navigating the carbon credit process.

“The world needs solutions with immediate climate action and farmers are under increasing financial pressure that’s threatening their futures—the CarbonNOW program addresses both,” said Grant Aldridge, CEO of Locus AG. “Through CarbonNOW, we are expediting the once futuristic idea of paying farmers for sequestering carbon by streamlining the carbon credit validation process, and also providing access to an exclusive technology that can easily double their profit per acre.”

Farmer: Kelly Garrett
Kelly Garrett is a nationally recognized high-yield farmer from Iowa who has been growing row crops for 22+ years. He has a passion for improving the sustainability of agriculture practices and is one of seven founding members of XtremeAg, a consortium of farm innovators using precision ag technologies and regenerative practices to maximize yields. Despite struggles from storms and the pandemic, Kelly continues to use a variety of these practices, including no-till, composting and use of Locus AG’s Rhizolizer® soil “probiotic” technology. His efforts have resulted in 22,745 metric tons of carbon sequestered to date.

“Locus AG’s CarbonNOW program helped me become one of the first farmers in the nation to market carbon credits in the Nori marketplace—which will provide unforeseen financial gain to our farm at a much-needed time,” Garrett said. “I would recommend that every farmer look into the value of carbon credits and utilize CarbonNOW to streamline the process, increase tons of carbon per acre and reap the benefit of more productive crops.”