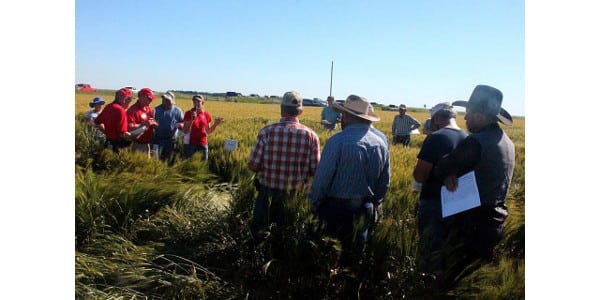 Complementation means getting consistent performance by planting multiple varieties that offset each other’s strengths and weaknesses. This should be basic for your crop planning. An example of complementation might be growing a high yielder with less winter hardiness and a variety that yields a bit less but has good winter hardiness.

Because there is no single perfect wheat variety for all production systems or in all years, using complementary varieties will enable you to realize the greatest benefit from a specific variety’s strengths and offset, to a high degree, its potential weaknesses. This compensation improves the opportunity for yield stability and profitability of your entire wheat production system. The number of complementary varieties that are grown as part of a wheat farming enterprise and the acres planted to each variety will depend entirely on specific production conditions and any special needs (common diseases or insects, etc.).

There are four steps in developing and updating your wheat farm’s variety complementation strategy:

The major use of the Nebraska wheat crop is as bread wheat for human consumption. Therefore, the grain must meet the expectations of millers and bakers to produce a quality end product. Quality is determined by both variety and growing conditions.

Harvested grain yield is one of the most important factors to consider when selecting varieties. Results of UNL variety tests are the best and most publicly available information on how specific varieties have performed under Nebraska conditions.

Yield varies from year to year and location to location as a result of environmental factors (soil, rainfall, temperature, etc.). Thus, care needs to be taken when interpreting the yield data from variety test plots. The more locations tested and the more years represented, as well as the extent of similarity between the test and grower’s field environments, the more reliable the information will be.

Maturity. Early maturing varieties are likely to escape damage from hot winds, drought, and rust infection; however, they are more subject to late spring freezes. Producers with large acreages can spread out risk and harvest by using varieties of differing maturity.

Winter Hardiness. Wheat is most likely to be damaged by cold temperatures: 1) just after heading, 2) in the spring after growth starts, and 3) in the fall before wheat hardens. Varieties differ in their susceptibility to freeze damage.

Coleoptile Length. The coleoptile is a leaf sheath that surrounds and protects the first true leaf as it grows from the seed toward the surface. If the coleoptile is shorter than the depth of planting, emergence will become difficult. The young seedling might not reach the surface and ultimately will die, resulting in stand loss. With the introduction of semi-dwarf varieties, depth control became even more important because of the shorter coleoptile of semi-dwarf wheat compared to conventional height wheat varieties.

Lodging and Shattering. Since wheat is harvested with the combine and harvesting must wait until the crop is ripe, varieties that are less likely to lodge or shatter are preferable. The shorter (semi-dwarf) varieties usually are less susceptible to lodging. Varieties with upright stature incur less hail damage (shattering).

Disease and Insect Resistance. Genetic resistance to insects and diseases is an excellent control method when such resistance is available. Hessian fly, wheat streak mosaic, soil-borne mosaic, Russian wheat aphids, stem, stripe and leaf rusts, and other pests can and do cause serious losses in the Nebraska wheat crop at times. The use of resistant or tolerant varieties, plus good cultural practices, can minimize the losses.

Acid Tolerance. Some Nebraska soils are becoming more acidic as a result of using nitrogen fertilizers. Acidic (low pH) soils have more free aluminum, which can burn root tips and lead to poor vigor. The wheat producer should be aware of the soil pH and mineral content of the soil. Wheat varieties differ in their ability to tolerate low pH soils and alkali.

Seed Size and Test Weight. Planting larger seeds will require higher seeding rates to achieve the necessary plant population (plants per acre). Seed should have a minimum test weight of 57 lbs/bu, preferably greater. Winter wheat seeding recommendations should be changed from a lbs/acre rate to seeds/acre rate. The number of winter wheat seed in one pound can range from more than 20,000 to less than 10,000, depending on the variety and the year produced. All seed should be cleaned and the small and cracked seeds eliminated. Shriveled seed can reduce yields because germination is slower and emergence less. Instead of planting low test weight or shriveled seed, plant certified, treated wheat seed which is shown to be an economical practice.

Seed Protein. Seed protein is another factor linked to increased plant vigor and higher grain yields. It is not the percent protein in the seed that has the greatest influence on seed quality, but rather the amount of protein contained in each kernel. For example, seed that has a thousand kernel weight (TKW) of 34 grams (13,500 seeds per pound) with 11% protein contained 3.7 mg protein per seed. A seed lot with a TKW of 20 grams (22,700 seeds per pound) with 13% protein would only contain 2.6 mg protein per seed. In this example, the larger seed with a lower protein percentage would provide more protein per seed (and consequently more protein per seedling) than the smaller, higher protein percentage seed lot. Again, seed size should be the overall determining factor for seed lot selection. However, all things being equal (variety, seed size), producers should look for high grain protein in seed lots.

Grazing Potential. In a study conducted near Sidney during the mid-1990s, six wheat varieties were evaluated: four were standard height and two were semi-dwarf. While some differences among the varieties were observed for various traits in specific years, there were no consistent or overall trends for superior forage performance by any of the varieties over the three years of the study or for standard height wheat versus semi-dwarf. Since there was little difference in forage yield, we encourage planting the one with the most yield potential.