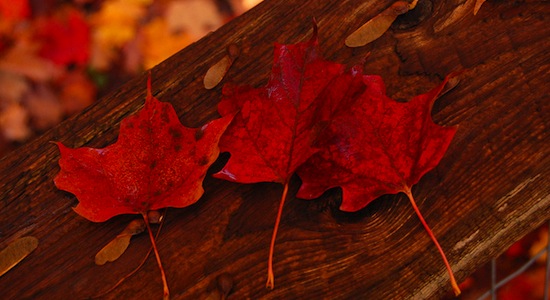 In addition to widespread euphoria, dusty cars, and dry laundry, another effect of all this sunshine is red leaves. (Muhammad Ali, Flickr/Creative Commons)

CANTON, N.Y. — We need to figure out how to put Amazon in charge of delivering the weather in the future. Whatever service Ma Nature is using seems to be falling down on the job lately. I don’t believe she intended to give us a record-setting wet summer; I just think all the good weather probably got misplaced on a loading dock in Topeka, or something like that. The spate of mild sunny weather in mid-September, while very enjoyable, was clearly meant to be dispersed over the course of June and July to break up the nonstop rain, some of which was no doubt tagged for 2016. I’d be willing to pay a premium for timely delivery next year.

In addition to widespread euphoria, dusty cars, and dry laundry, another effect of all this sunshine is red leaves. This requires a bit of explanation, given that sunlight typically makes leaves green by activating chlorophyll. This verdant molecule at the center of the photosynthesis miracle is what makes the world go ’round. Some claim it is money, but they need a reality check (so to speak). Without chlorophyll the sole life on Earth would be bacteria, whereas without money we’d merely have to adopt a barter system. Given that chlorophyll and currency are both green, it’s easy to forgive the mistake.

In the fall, trees start killing off their chlorophyll, revealing yellow xanthophylls and orange carotenes that were in the leaves all along. How could a tree be so heartless as to slay its chlorophyll? Aside from the obvious—it doesn’t have a heart muscle—the answer is to keep from drying to a crisp in the winter.

Each leaf is jacked into the tree’s circulatory system—water and nutrients enter, and sugars exit. In autumn these connections need to be sealed, or the open vascular tissue would let moisture seep out, and pathogens sneak in. As the days shorten, trees start to make a waxy plug, or abscission layer, between leaf and twig, thus killing chlorophyll and exposing the new color scheme.

Yellow and orange are hidden under green, but whence comes red? Sunny fall weather induces the production of red and purple leaf colors, which are due to a group of organic chemicals known as anthocyanins. These large, complex molecules take much energy to create, and some plants invest in them in the spring to protect emerging leaves from UV radiation, which can damage chlorophyll at near-freezing temperatures. Once a leaf hardens off, however, the plant stops making anthocyanins, which break down and fade away.

A common explanation for fall anthocyanin production is to protect leaves from the sun. With practice, some of us have even been able to say this without giggling, because the idea is full of holes. For one thing, nighttime temps have been nowhere near freezing. And the leaves are as hardened off as they get. More importantly, it seems far-fetched that trees would use precious energy reserves to protect scant, dying chlorophyll at the same time they’re just as busy making abscission layers that kill said chlorophyll. And if fall anthocyanin is so important for protecting chlorophyll, how come the majority of tree species do not make it?

Whatever the actual reason for red leaves, they are abundant this fall. Our native red maple, Acer rubrum (not to be confused with “crimson” Norway maples), has lived up to its name this year, with vermillion displays throughout the forest, and especially along rivers and around ponds and wetlands.

It could be that red maple is trying to pick up the slack for other trees, some of which look anything but colorful. Sugar maples, icons of the Northeast, are having a very bad year. In some parts of northern NY it is the fourth consecutive year of maple leafcutter infestation. These native moth larvae chew holes in maple leaves, making it look like trees were attacked by an army of hole-punches. By late August or early September, infested leaves turn brown, curl, and drop.

A patchy but intense outbreak of forest-tent caterpillars across the region caused complete or near-total defoliation in June, and for the first time in recorded history, maples did not put out a second flush of leaves. It is believed that the drought of 2016, which in some parts of the north country saw the driest soil conditions ever documented, stressed maples to the point that they were too weak to produce a second crop of leaves. As a result, more than 200,000 acres of northern NY sugar maples look like winter arrived in June.

But sugar maple is not the only tree with color blindness this fall. Other species like ash and aspen which often develop orange, purple and red leaves are entirely yellow this year. While the cause is not known, the result is a preponderance of yellow on the landscape.

A good friend of mine cannot see colors in the red spectrum, but I hope the rest of us have a chance to see lots of red this fall. And by next spring, let’s try to come up with a way to get good weather to our doorstep on time. Maybe drone delivery is the answer.