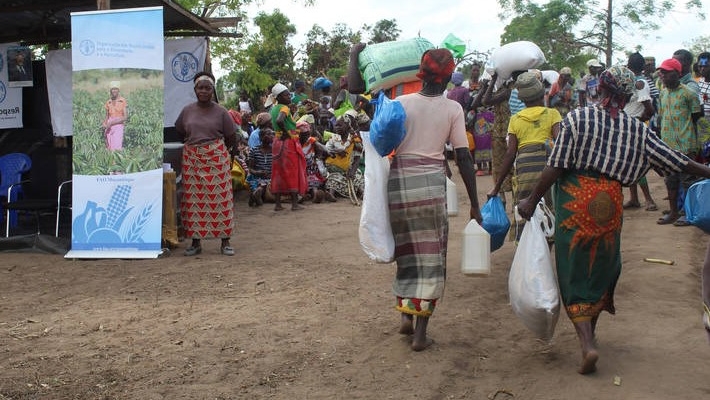 Around 15,000 farming households hit by Tropical Cyclone Idai will receive agricultural kits including early-maturing maize and bean seeds to grow their own food again. (FAO)

SOFALA PROVINCE, Mozambique — Farmers in areas left devastated by Tropical Cyclone Idai in Mozambique have started to receive much-needed agricultural inputs thanks to a joint effort by the Food and Agriculture Organization of the United Nations (FAO) and Mozambique’s Ministry of Agriculture and Food Security to assist hard-hit rural families to get a head-start on the impending secondary growing season.

In Manica and Sofala provinces, an initial 15 000 vulnerable households – or around 75 000 people – will receive agricultural kits containing hoes, machetes and early-maturing maize and bean seeds that, once sown, will be ready to harvest after just 90 days. The distribution will take place alongside food rations from the World Food Progamme (WFP), which will help to deter beneficiaries from consuming the seeds immediately rather than planting them.

Farmers in these two provinces alone produce approximately 25 percent of the national cereal output, but they saw nearly all of their assets swept away by Idai. Most lost all or large portions of their seed stores as well as the standing crops they were about to harvest.

FAO’s agricultural kit distributions will ensure that the most resource-strapped farmers in Manica and Sofala can plant their crops in the current secondary agricultural season, for which sowing started in April and harvests will be in July.

“Reviving livelihoods and markets as soon as possible is crucial to help farmers, fishers and pastoralists get back on their feet in time for the main planting season in October and beyond,” said the FAO Representative in Mozambique, Olman Serrano. “The smaller second planting season is now underway, leaving an increasingly narrow window of opportunity to sow early-maturing crops such as the beans and maize FAO is distributing. These can be harvested around 90 days after planting and go some way to filing the productive gap left by the massive losses suffered in this main harvest,” he said.

In addition to food, beneficiary households will also be able to produce their own seeds for planting in October, when the country’s main agricultural season is set to begin. Safeguarding the main season and ensuring that rural families are able to fully participate in it is critical to restoring food security in Mozambique, where Idai’s impacts have been ruinous for both lives and livelihoods. Fisheries infrastructure, food and grain stores, and livestock were washed away, and hundreds of thousands of hectares of crops are reported to be completely wiped out.

Subsistence farming is crucial for Mozambique’s economy and food security, with over 80 percent of the population depending on agriculture for their livelihoods and some 99 percent of these being small-scale farmers.

The central region is Mozambique’s breadbasket and plays a vital role in cushioning food shortages, while the port city of Beira in Sofala province is a key trade gateway for the country. Extensive damage to Beira port’s infrastructure and connecting transport routes could impede the importation of grains – approximately 1 million tonnes of wheat and rice are imported annually into the country.

Prior to Cyclone Idai, the affected provinces had already experienced recurrent droughts and floods over the last three years. As a result, they were already experiencing chronic food insecurity and highly vulnerable to further shocks. In December 2018, the Integrated Food Security Phase Classification (IPC)  estimated the number of people in Crisis or worse levels of acute food insecurity in Mozambique at 1.78 million.

The sudden lack of food or the capacity to produce it means that this number is likely to rise dramatically in the coming weeks and months. While the exact extent of the damage to agriculture remains to be assessed, FAO and WFP are already carrying out rapid needs assessments and mapping productive, agricultural and fisheries infrastructure and assets to shape the inter-agency Food Security Cluster response plans.

In support of livelihoods activities, this response will cover not only seed and tool distributions, but also repairing rural infrastructure such as roads and irrigation equipment, launching livestock vaccination campaigns, increasing fodder production and restoring or replacing fishing boats and equipment. FAO will also be supporting new IPC analysis to inform consequent decision-making on restoring food production and mitigating what could otherwise be a catastrophic fallout on food security and nutrition in Mozambique.

FAO is seeking an initial $19 million to rebuild critical agricultural and fisheries infrastructure, resume local food production and support livestock owners. So far, $3.85 million has been allocated to immediately reach some 95 000 people. A gap of $15.5 million – 80 percent – remains.

Ag of the middle continues to shrink

Be prepared for emergency situations
May 4, 2020