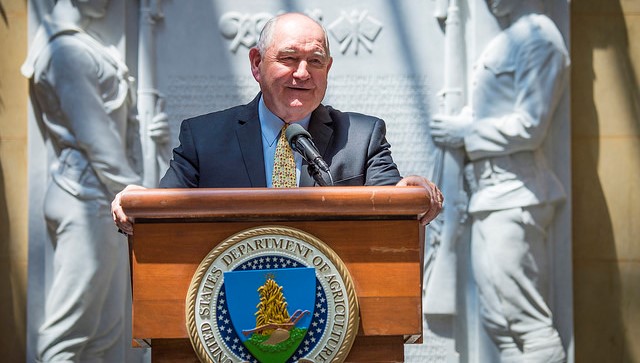 “USMCA is a big win for American workers and the economy, especially for our farmers and ranchers. The agreement improves virtually every component of the old NAFTA, and the agriculture industry stands to gain significantly,” said Secretary Perdue. (U.S. Department of Agriculture, Public Domain)

“USMCA is a big win for American workers and the economy, especially for our farmers and ranchers. The agreement improves virtually every component of the old NAFTA, and the agriculture industry stands to gain significantly,” said Secretary Perdue. “President Trump and Ambassador Lighthizer are laying the foundation for a stronger farm economy through USMCA and I thank them for all their hard work and perseverance to get the agreement across the finish line. While I am very encouraged by today’s breakthrough, we must not lose sight – the House and Senate need to work diligently to pass USMCA by Christmas.”

Background:
USMCA will advance United States agricultural interests in two of the most important markets for American farmers, ranchers, and agribusinesses. This high-standard agreement builds upon our existing markets to expand United States food and agricultural exports and support food processing and rural jobs.

All food and agricultural products that have zero tariffs under the North American Free Trade Agreement (NAFTA) will remain at zero tariffs. Since the original NAFTA did not eliminate all tariffs on agricultural trade between the United States and Canada, the USMCA will create new market access opportunities for United States exports to Canada of dairy, poultry, and eggs, and in exchange the United States will provide new access to Canada for some dairy, peanut, and a limited amount of sugar and sugar-containing products.

Earlier this year, nearly 1,000 American food and agriculture associations and companies announced their support for USMCA and the National Association of State Departments of Agriculture signed a letter to Congressional leadership urging them to ratify USMCA.

Key Provision: Geographical Indications
The agreement institutes a more rigorous process for establishing geographical indicators and lays out additional factors to be considered in determining whether a term is a common name.

Key Provision: Poultry and Eggs
U.S. poultry producers will have expanded access to Canada for chicken, turkey, and eggs.

Key Provision: Wine and Spirits
The three countries agree to avoid technical barriers to trade through non-discrimination and transparency regarding sale, distribution, labeling, and certification of wine and distilled spirits.

Statements on USMCA from the agriculture industry