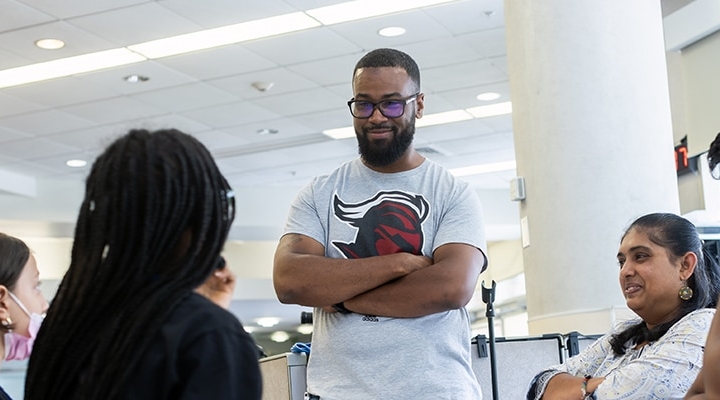 “What did we learn yesterday?” asks Rashade Haynes II as he kicks off the final day of a weeklong summer camp focused on science education for 23 middle schoolers from the Newark area.

Hands of the eager young people seated before him in a Bristol Myers Squibb meeting room shoot up. “About DNA—the double helix,” one girl says. Others echo her answer.

After opening remarks, Haynes introduces two Bristol Myers Squibb medicinal chemists to the students. The scientists run through an entertaining series of experiments that cover topics such as the properties of dry ice, water vapor, carbon dioxide, and liquid nitrogen. They also use leaf blowers to show air pressure and demonstrate Bernoulli’s Principle, a scientific cornerstone related to flight and other functions.

John Bender, who leads the demonstrations, tells the students that although he has been a scientist for decades, he still gets excited doing the daily experiments his job requires. Earlier in the week, instructors showed the young camp-goers how the heart, lungs, and human digestive system work. “If you have curiosity for your whole life, science is where you want to be,” Bender says.

For Haynes, encouragement like this is the goal of the summer program—a partnership between Rutgers and Bristol Myers Squibb held in early August for four days at Rutgers–Newark and one day at the company’s New Brunswick location. A native of East Orange, New Jersey, Haynes received his bachelor of animal science degree at Rutgers’ Cook College in 2002 before earning a Ph.D. in cellular and molecular immunology and retrovirology at Ohio State University. Now a senior principal scientist for Bristol Myers Squibb, he engages students with the enthusiasm and charm of a beloved middle school teacher.

Haynes initiated the idea for the camp partnership between Rutgers–Newark and Bristol Myers Squibb, one of the world’s largest biopharmaceutical companies. “My idea was to give these young students a holistic view of what it’s like to be a scientist,” he says. “Hopefully, by osmosis, they can see themselves taking the same path.”

Sheronia Rogers, assistant dean for Rutgers–Newark’s Center for PreCollege Programs, which runs the camp, says the center serves more than 2,000 students and parents annually by facilitating various programs throughout Newark, East Orange, Orange, Irvington, and the greater Essex County area. She says the Bristol Myers Squibb STEM camp fulfills a key goal of the center. “A lot of the students that we serve from marginalized communities may not get much STEM access and exposure,” Rogers says, adding that the middle school students come from the Rutgers–Newark center’s partner schools. “STEM exposure is extremely important.”

Although for some students the camp introduces them to scientific research, for others it’s a chance to explore career possibilities. Carlos Barahona, who will be a first-year student at Cicely L. Tyson High School of Performing and Fine Arts in East Orange, is fascinated by an experiment that simulated the workings of the respiratory system. “It helped me understand how the diaphragm works and helps out the lungs,’’ says Carlos, who is considering becoming a scientist or math teacher.

He also learns from experiments that problem-solving is a big part of research. “We had to go through multiple trial and errors because some parts weren’t working out at first,’’ Carlos says.

The first four days of the camp consist of morning presentations by the company’s scientists and afternoon sessions led by Rutgers–Newark undergraduate and graduate students who guide the middle schoolers in experiments. Rogers says the diverse mix of college science majors serves as excellent examples for the middle schoolers. “They see Rutgers students and see that it’s possible for them.”

Tiffany Olivera—a Rutgers–Newark graduate student from Kearny, New Jersey, who is in her second year of study for a doctorate in chemistry—says she enjoys working with the middle schoolers. “I appreciate the diversity in this program,” says Olivera, a first-generation American whose parents immigrated from South America. “I don’t see very many brown women or Black women in the sciences. I love reaching out to these communities. I want these students to know that they shouldn’t let barriers stand in their way.”

Something to BRAG about

Haynes says this Rutgers and Bristol Myers Squibb summer camp partnership is just one example of how the university and the company work together. About three years ago, Haynes, along with his work peers and fellow Rutgers alums Austin Thekkumthala SAS’13, GSNB’15, and Dan Szatkowski CC’06, led the formation of BRAG, which stands for Bristol Myers Squibb Rutgers Alumni Group, to unite the 1,700 Rutgers alumni employed at the company.

Thekkumthala, a native of Union Township, New Jersey, who earned his undergraduate and graduate science degrees at Rutgers, worked as a security guard at Bristol Myers Squibb to help pay his way through school. While unlocking a door one day, he met a mentor who helped him land an internship which led to his full-time job as a scientist. He says volunteering his time at the camp and mentoring young people are a way to pay back the support he received. “Success comes with a moral obligation to help others,” Thekkumthala says.

Deodate Davis, an associate scientist at Bristol Myers Squibb, who previously was a research teaching specialist at the Rutgers Cancer Institute of New Jersey, was a co-leader of the camp and helped BRAG members organize the company’s participation. Previously, BRAG has partnered on webinars, a public health equity program, and intern recruitment. “There is so much enthusiasm to give back to the university,” says Szatkowski, who is pursuing a doctorate in toxicology at Rutgers.

Haynes says BRAG plans to work with Rutgers–Newark to build on the program’s success and will hold the camp again next year. The Bristol Myers Squibb group also is hopeful to replicate the program in partnership with Rutgers programs in Camden and New Brunswick.

John Borgese, director for career and industry engagement for the Rutgers University Alumni Association, credits several at Rutgers–Newark for supporting the camp: School of Arts and Sciences–Newark Dean Jacqueline S. Mattis; Patricia Margulies, assistant dean for development; and Steven Smith, director of corporate and foundation relations. Borgese says the Bristol Myers Squibb partnership is an excellent example of how Rutgers, as the state’s flagship university with more than 570,000 alumni, can create programs with large companies that serve common goals such as expanding diversity, building community connections, and supporting projects that serve the common good.