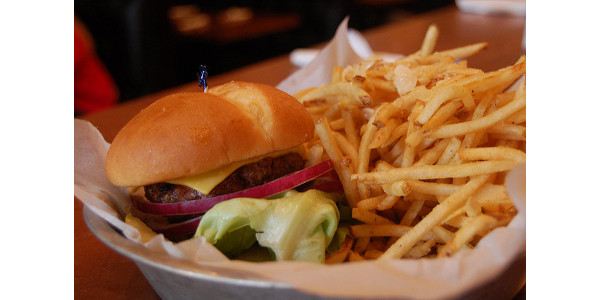 In this year's quest, the Iowa Beef Industry Council (IBIC) and the Iowa Cattlemen's Association (ICA) are encouraging you to nominate your favorite burger, whether it's gourmet or down-home style. (stu_spivack via Flickr)

AMES, Iowa — Iowa’s cattle producers are asking their fellow Iowans to help find Iowa’s Best Burger in 2017. In this year’s quest, the Iowa Beef Industry Council (IBIC) and the Iowa Cattlemen’s Association (ICA) are encouraging you to nominate your favorite burger, whether it’s gourmet or down-home style.

This is the eighth year the two groups are holding the annual Iowa’s Best Burger contest, which officially kicks off February 13. All nominations must be in the IBIC office by 5 p.m. on March 13, 2017.

“We are in search of Iowa’s Best Burger,” says Brooke German, Director of Marketing for the IBIC. “To qualify to be named Iowa’s Best Burger, the burger must be a 100% beef burger and served on a bun or bread product.  Although burgers are often standard fare, we know from experience that the winners of this contest serve outstanding burgers.”

In order to recognize these great burgers, IBIC and ICA are asking Iowans to nominate their favorite burger for the award, and those nominations can be made by mail, text, or online. Details about the contest, rules, and nomination forms are available on the Iowa Beef Industry Council’s website, www.iabeef.org. Burger lovers can also find a link to the online nomination form at the Iowa Beef Council Facebook page; or by texting BEEF to 313131. Photos of your favorite burger can be shared socially using #IABestBurger.

“There are three ways to nominate your favorite burger,” explains Katie Olthoff, Director of Communications for the ICA. “We are accepting nominations online at www.iabeef.org; by texting BEEF to 313131, which will provide a link to the online voting page, or a paper nomination can be mailed to the IBIC office.”

The nomination period ends March 13, 2017. German noted that the top 10 restaurants with the most votes are eligible for the title of Iowa’s Best Burger. The top ten finalists will be announced on March 20. Finalists will receive a certificate and will be eligible for the secret taste-test of contest judges. The 2017 Best Burger in Iowa will be announced on May 1 and will kick-off May Beef Month.

“The Best Burger contest uses checkoff dollars to showcase some of Iowa’s best restaurants, and obviously, best burgers! Every year, we have some loyal followers who make it a point to visit the top 10 restaurants and taste the best beef patties Iowa has to offer,” says Steve Rehder, chairman of the Iowa Beef Industry Council.