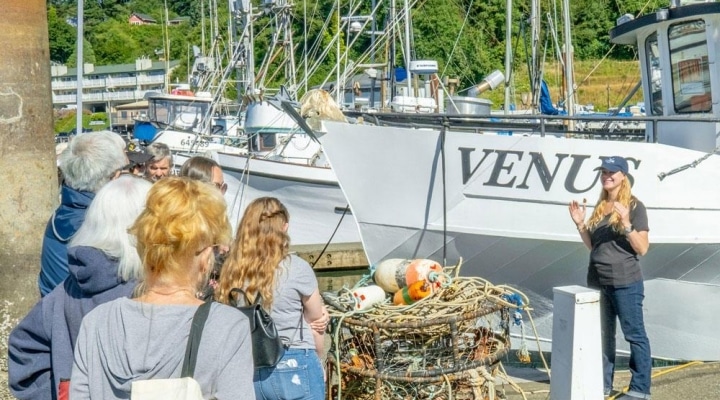 Angee Doerr, a Sea Grant Extension marine fisheries educator, explains crabbing at the Shop at the Dock tour at the Port of Newport. (Courtesy Photo)

NEWPORT, Ore. – With her group assembled and the squawks of seagulls echoing across Yaquina Bay, Angee Doerr headed down the steel ramp at Dock 5 at the Port of Newport to talk about seafood.

Shop at the Dock was back.

A popular program of Oregon Sea Grant and Oregon State University Extension Service, the tours started in Newport in 2014 as a way to bring fishermen and the public together. Participants are given behind-the-scenes guided tours of commercial fishing docks to learn about how seafood is caught and how to buy it directly from fishermen selling off their boats.

In 2020, the tours, which had expanded to the Port of Garibaldi in Tillamook County, were canceled due to the COVID-19 pandemic. In response, Amanda Gladics, Sea Grant Extension fisheries management specialist in Astoria, produced a series of videos focused on the Oregon seafood industry.

In-person Shop at the Dock tours returned with COVID-19 restrictions being lifted in Oregon on June 30. The two scheduled tours for Friday were quickly filled and Doerr – a Sea Grant Extension marine fisheries educator based in Newport – added a third tour due to the positive response. Shop at the Dock tours will continue in Newport on consecutive Fridays through Aug. 20. Garibaldi tours will be announced soon.

At 9:28 a.m. on Friday and with the first tour filled to its capacity, Doerr led the group to its first stop: the Monde Uni, a 39-foot longline fishing vessel. True to its name, the boat uses a long line, called the main line, with baited hooks attached at intervals. Longliners target halibut and sablefish, also known as black cod.

Longlining can be prone to incidental catching of non-targeted fish and seabirds, referred to in the industry as bycatch, but Doerr explained that Oregon’s fishing industry has worked with Oregon Sea Grant and other researchers to introduce methods that have all but eliminated bycatch in longline fishing.

Doerr noted that the boat next to the Monde Uni is a troller – a hook-and-line vessel that selectively targets salmon and tuna.

“All of our salmon and tuna in Newport, to this day, are caught using a hook and a line,” she said.

Moving down the dock, Doerr stopped behind a pile of circular steel traps. Crab pots are a familiar sight on the docks during Oregon’s Dungeness season that typically runs from December through August.

“Oregon manages its crab fishery based on size, season and sex. For example, we only take male crabs,” Doerr said, adding with a laugh, “males just aren’t as important reproductively. Sorry.”

Turning her attention to a fishing vessel with gear that included large plastic barrels, Doerr segued from crabs to hagfish, also known as slime eels for their ability to produce slime to thwart would-be predators. Hagfish are “a living fossil,” Doerr said, alluding to the fact that the fish hasn’t changed for 300 million years. Hagfish are a delicacy in parts of Asia, and almost all of them caught in Oregon are exported to South Korea.

The next stop featured the Miss Yvonne, a 60-foot Newport boat that is recognizable as a commercial shrimp boat due to its wooden trawl doors. The doors hold the shrimp net open as it is towed behind the boat. As with halibut and tuna, Oregon fishermen have worked with researchers at OSU and the Oregon Department of Fish and Wildlife to boast a shrimp fishery that is nearly 100% bycatch free, Doerr said.

At a stop at the Pacific Raider, Doerr revealed that it’s one of a growing group of commercial fishing vessels that catch market squid – calamari as it appears on a menu or in a grocery store. These boats are coming from California as rising ocean temperatures have allowed the squid to move north.

“Market squid boats have lights on the side because most squid fishing occurs at night,” Doerr said. “You shine the light, drawing plankton up the surface which draws the squid up to the surface.”

At the final stop, Doerr noted the several large boats on the docks that are known as mid-water trawlers. They are usually the biggest boats in the port because they catch extremely large schools of fish. Doerr spent some time on the nature of catching groundfish – a category that includes 100 different species – including some that are endangered. Groundfishing requires a permit, involves strict quotas, and features a human observer who is on the boat recording every fish that is caught.

Finally, Doerr emphasized that aside from the largest crab boats, most Newport fishing vessels catch multiple species throughout the year.

None of the fishermen on this tour were selling fish directly from their boats, so Doerr ended with a tip to look for handmade signs that vessels post around the port. In Newport they will be near the entrance to Port Docks 3, 5 or 7.

When buying directly from the fishermen, Doerr noted that fish are typically sold whole, and that you should ask when the fish was caught to determine its freshness. Also, you should consider taking up the seller if they offer the option to fillet the fish because that results in more meat.

Attending the tour were Karen and Gary Kone of Lincoln City, and their friends Emily Rice and Kira Saling, who were visiting from Utah and Idaho, respectively. Although the Kones live just 25 miles from Newport, they had never been to a Shop at the Dock event.

“I was excited to see them come back,” Karen Kone said.

“It was interesting to learn about all of the specialties,” Saling said.

Gary Kone said, “I’m a big believer in word-of-mouth, so I will definitely let friends and neighbors about it. This was really cool.”

After the tour, the Kones, Rice and Saling went to the Chelsea Rose Seafood Market, which operates on Port Dock 3 out of the historic fishing vessel of the same name.

In 2020, Gladics, Doerr and Jamie Doyle, a Sea Grant Extension marine resources specialist in Coos and Curry counties, partnered with the Oregon Department of Agriculture and the Oregon seafood industry on an initiative called Eat Oregon Seafood. They created a webpage and a promotional campaign on social media that features the hashtag #EatOregonSeafood. 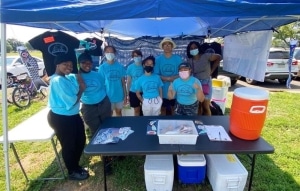 NEW BRUNSWICK, N.J. — Talia Young GSNB’16 (Ecology and Evolution) started the “Fishadelphia” program in 2018 after earning her doctoral degree in Ecology with former Rutgers marine and coastal sciences professor Olaf Jensen. Currently, Young is a visiting assistant professor at Haverford College in the environmental sciences program. This article has been excerpted from High […] 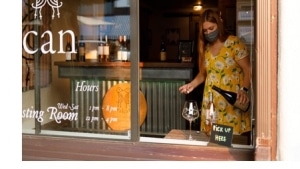 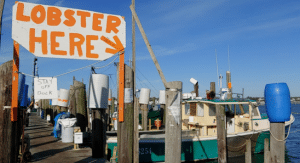 COVID-19 had big impact on commercial fishing in Northeast

NEW BRUNSWICK, N.J. — With restaurants and supply chains disrupted due to the global coronavirus pandemic, two-fifths of commercial fishermen surveyed from Maine through North Carolina did not go fishing earlier this year, according to a Rutgers study that also documented their resilience and adaptation. Of those who kept fishing, nearly all reported a decline […]