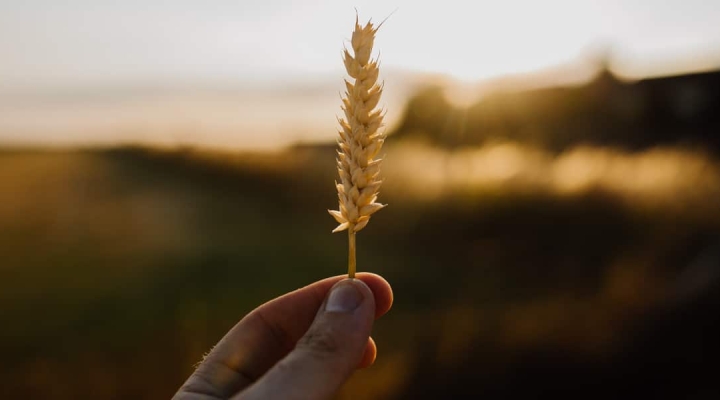 “This award shows how SDSU is investing in the development of wheat varieties with good milling and baking qualities, which makes South Dakota wheat more desirable for the food processing industry,” said SDSU professor Sunish Sehgal. “High quality varieties build the industry’s confidence in the South Dakota wheat supply, increasing the demand for wheat grown in the state.” (Phil Hearing/Unsplash)

The variety was chosen by wheat quality representatives at the Wheat Quality Council annual meeting held in Kansas City, Missouri, and the award was presented to Sehgal by Vance Lamb of Ardent Mills, who served as the moderator for the hard red winter wheat evaluation. SD Midland was chosen among 21 varieties across nine public and private wheat breeding programs after being sent to several flour millers throughout the U.S. for analysis and baking evaluation.

“This award shows how SDSU is investing in the development of wheat varieties with good milling and baking qualities, which makes South Dakota wheat more desirable for the food processing industry,” said Sehgal. “High quality varieties build the industry’s confidence in the South Dakota wheat supply, increasing the demand for wheat grown in the state.”

Not only does SD Midland demonstrate high quality end-use characteristics, but it also provides producers a high yield with good straw strength and resistance to stripe rust, a disease caused by a fungus commonly found in cereal crops.

This variety grows best in a drier climate, making it more adaptable to central and western parts of the state. Additionally, SD Midland has better resistance to the drought-like conditions that much of South Dakota and the Midwest have been experiencing in recent years.

Sehgal mentions that releasing varieties with these factors in mind is key to answering requests from producers across the state.

“We are here to develop varieties for producers not based on what we think they want, but by actually hearing directly from them what they are looking for,” said Sehgal.

Serving the needs of producers is important in ensuring a strong wheat supply in the state and developing varieties that produce a high yield that can withstand environmental conditions to stay competitive with corn and soybeans is crucial in encouraging farmers to keep wheat in their crop rotation.

“SD Midland was released to South Dakota producers for its excellent grain quality and adaptation to South Dakota’s unique environment,” said David Wright, professor and head of the Department of Agronomy, Horticulture and Plant Science. “The SDSU wheat breeding programs keep farm profitability and sustainability at the top of the priority list when developing and releasing new wheat varieties. I congratulate Sunish for his efforts in forwarding SDSU’s core mission.”

SD Midland performed well in the South Dakota state trials and the 2020 USDA Northern Regional trials. It ranked second overall among 47 entries that were tested across 17 locations in six northern U.S. states, who produce more than 70% of the U.S. wheat supply, including Minnesota, Montana, North Dakota, South Dakota, Nebraska and Kansas.

Each year, the SDSU winter wheat breeding program evaluates more than 11,000 trial plots across eight locations and assesses the quality of more than 1,000 unique experimental varieties to select the best lines for public release and on-farm production.

According to Sehgal, it can take up to 10 to 11 years for a new variety to be ready for release.

“It’s a very laborious process,” said Sehgal. “We discard about 95% of our experiments every year just to keep 5%.”

The breeding of SD Midland started in the spring of 2009 and was made available to certified seed growers in the fall of 2021.

Despite the amount of effort that goes into the wheat breeding process, Sehgal says he can’t imagine doing anything else.

“It’s my passion – I enjoy working in the field and making selections,” said Sehgal. “Developing new varieties and helping producers feed extra people is my way of contributing to society.”