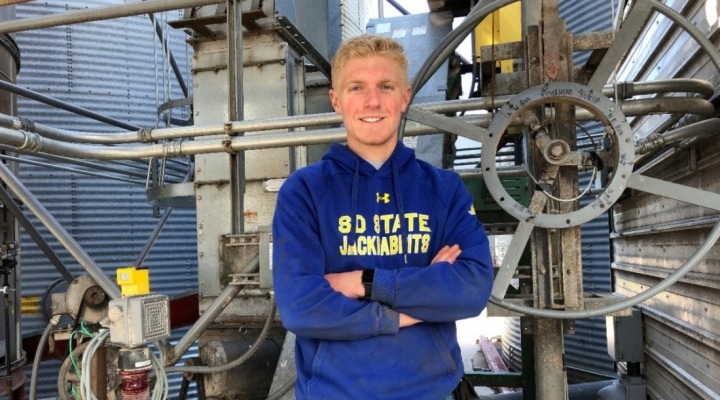 BROOKINGS, S.D. — For Carson Kahler, a senior agricultural systems technology student from Sherburn, Minnesota, agriculture has been his way of life since birth.

Being the sixth generation on his family’s corn and soybean operation, Kahler looks forward to following in the footsteps of those who cultivated the soil before him and sharing what that looks like with people across the globe.

“My family has been doing this for six generations now,” said Kahler. “Growing up, my brother and I would fight about who got to ride with our dad at the farm for the day. Every day after school, I would get off the school bus and do my homework as fast as I could so I could go out to the field.”

A few years ago, Kahler purchased a used drone from his cousin and, shortly after, his father encouraged him to use it to take footage of their family’s operation.

“My dad had the original idea,” said Kahler. “He told me I should take videos of our farming from year to year so that we can look back in the future and see how our operation was and I thought it was a cool idea.”

At first, Kahler’s videos were strictly comprised of drone footage that he posted to his YouTube channel to share with close friends and family members. However, that quickly changed when he posted a planting video in spring of 2018 and a harvest video later on that fall. Over the course of the next year, his harvest video received over 130,000 views.

“It was originally just something I was doing for fun, but those 130,000 views got me my first 1,000 subscribers,” said Kahler.

With his first few videos performing so well, Kahler realized he had something more in the works and decided he wanted to start a vlog – a video blog.

“I figured I would try it out,” said Kahler. “I had never done anything like it before and I was very uncomfortable in front of the camera, but I learned as I went, and every time I made a video, I learned things that I could improve on.”

His first vlog that really grabbed the attention of YouTubers was on July 26, 2019, and reached 46,000 views. A few weeks later, he shared a farm machinery tour video that received over 57,000 views, which encouraged him to keep producing the vlogs.

What started out as his personal YouTube channel evolved into what he called “Farm Country Living.” But, as his platform continued to grow in popularity and Kahler realized he wanted to take vlogging more seriously, he figured his channel needed a new, more relevant name. Therefore, to reflect his role on the farm, he named it the “6th Gen Farmer.”

Without any prior video production or editing experience, Kahler had to do his research to teach himself the ways of vlogging.

“I’ve always watched other YouTubers, but little did I know, that when you tun on the camera, it is like giving a presentation to an auditorium, but you forgot your notecards,” said Kahler. “I really had to get myself used to that.”

Some of the biggest skills Kahler had to learn were video editing and content planning.

“I want to be sure I am filming what the viewers want to see,” said Kahler. “I always ask myself “what am I doing and why am I doing it?” But it is also important to have a sense of humor as well, and I think that is where I excel – when something goes wrong, I am not the type of person to get mad. Instead, I will laugh about it and learn from my mistakes.”

He also had to learn time management and how to create a balance between his work and filming for his vlog.

“When I am on the farm and taking video, I try to be as efficient as I can,” said Kahler. “I don’t want my filming to take precedence over what I am actually doing, so I have gotten very good at multitasking.”

Kahler says one of the things he enjoys most about his platform is interacting with the online community.

“I am here to teach others about agriculture, yet I have learned so much from other community members,” said Kahler. “I absolutely love answering questions and responding to comments.”

His broad audience includes viewers from several different countries ranging from 13 to 70 years of age.

“When I first started, I remember telling my family that it would be cool if I hit 10,000 subscribers,” said Kahler. “It ended up taking less than a year and that blew my mind.”

Kahler’s vlog covers a variety of topics – from machinery and maintenance to planting, harvesting and spraying both conventional and organic crops, he is now educating more than 13,000 subscribers around the world who tune in each week to learn more about what he is doing on his family’s farm.

His vlog has even gained the attention of some agricultural companies, landing him a paid sponsorship from Teucrium, an exchange-traded fund (ETF) provider focused solely on U.S. agriculture.

Because of his YouTube channel, Kahler travels home to Sherburn, Minnesota, nearly every weekend to film new content to show his viewers what is currently happening on their farm. When he returns to campus during the week, he usually spends between two to six hours editing the footage before posting the finished product. That way, viewers see his videos just three to four days after they are filmed.

Kahler has learned that posting his videos on a consistent basis greatly impacts his viewership and has made a goal to share one video each week.

“I always post my vlogs on Sundays,” said Kahler. “After I post a video, I check it a few minutes later and, usually, there are already a few hundred views.”

Kahler recognizes the importance of sharing his life on the farm and sees it as a means of bridging the gap between those who live and work in agriculture and those who are unfamiliar with the industry.

“I like to help those who haven’t had a chance to be around agriculture to understand what actually happens,” said Kahler. “Agriculture is always changing, what goes into our food is always changing and our practices are always changing, so I think it is so important that farmers have an outlet to connect with consumers. It is important that farmers are telling our story and helping our consumers to be knowledgeable about the food they eat, the fuel they burn and the real differences between organic and conventional farming. I think consumers should know how products are made and I am absolutely honored that people love to see what I do every week.”

As for the future of the 6th Gen Farmer, Kahler has no intention to stop making videos. He plans to graduate from SDSU in December of 2022, and until then, will continue to farm with his family, focus on his YouTube channel, spend time with friends and work as an intern at C&B Operations, a large midwestern John Deere dealership, during the summer of 2022.

Following graduation in December, Kahler hopes to pursue a career in the industry while staying actively involved on the farm.

“My great-great-great-grandpa started our operation, and the fact that my brother and I have the opportunity to help keep it going is really special,” said Kahler.

Register for the 2022 Sorghum Improvement Conference Of North America