Home » SDSU Extension urges testing for nitrate due to drought 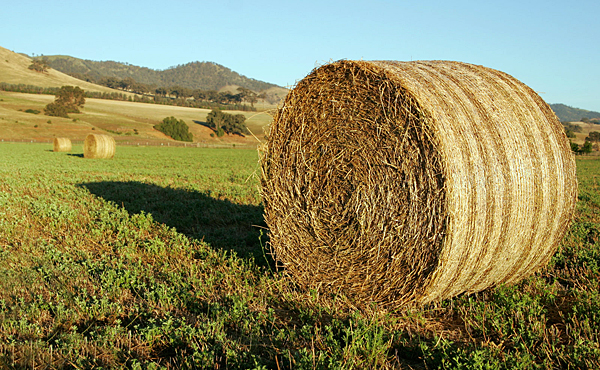 If the hay has already been cut and it tests positive, Harty says the recommendation is to send a core sample in after the hay is baled so that a representative sample can be collected and sent to a lab for quantitative analysis prior to feeding. (Wikimedia Commons)

BROOKINGS, S.D. — More than 63% of South Dakota is now labeled as being in a Severe Drought (D2) or Extreme Drought (D3) region. While the intense heat and lack of precipitation is creating an adverse growing season for farmers, the weather conditions are also not conducive for putting up high-quality forage either.

“With the current drought conditions across the state, the risk of high nitrates in forages is increased due to slowed photosynthesis and conversion of nitrate into proteins,” says South Dakota State University (SDSU) Extension Cow/Calf Field Specialist Adele Harty.

SDSU Extension encourages producers to get standing forages tested before being harvested for hay or grazing. Available at various SDSU Extension locations and veterinary clinics across the state (extension.sdstate.edu/nitrate-quiktest-forages), the Nitrate QuikTest for Forages allows producers to make decisions based on the presence or absence of nitrates and appropriate timing for cutting.

“This is a qualitative test,” Harty says. “Therefore, if the results are positive, the recommendation will be to wait a few days and bring an additional sample in for re-testing. If it is negative, the hay can be cut without risk of nitrates.”

If the hay has already been cut and it tests positive, Harty says the recommendation is to send a core sample in after the hay is baled so that a representative sample can be collected and sent to a lab for quantitative analysis prior to feeding.

A representative sample needs to be taken from different areas across the field to reflect topography and soil differences, as these factors can affect nitrate levels. Harty advises selecting plants from at least 10 different areas and cutting the plant at ground level or pulling it out of the ground so that the lowest growth nodes can be tested, as the highest concentration of nitrate is in the lowest third of the plant. The more representative the sample, the better the test will work to identify potential nitrate concerns, she says.

“Be diligent about testing forages prior to haying or grazing to prevent the negative impacts that nitrates can cause, specifically in ruminant animals,” Harty says. “If crops, such as wheat, fail to make grain, and producers plan to utilize them for a hay crop, test them for nitrates prior to harvest to determine their safety level. The higher the level of nitrogen fertilizer that is applied, the higher the risk for nitrate toxicity. Always err on the side of caution and have feeds tested.”