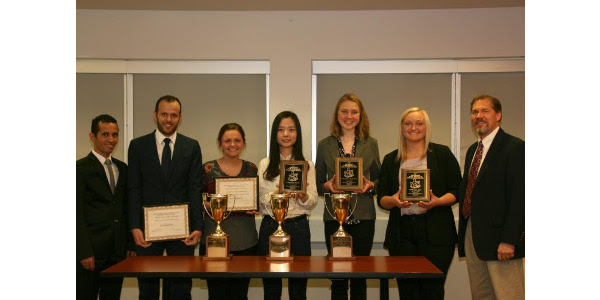 “Our students are outstanding and will be very effective professionals in the industry in the future,” said Vikram Mistry, Dairy and Food Science Department Head. “The team members include majors in dairy manufacturing, dairy production and food science, which reinforces the farm to table characteristic of the department and will give these participants an edge in their future careers.”

In dairy products judging, students evaluate the appearance, texture and flavor of six dairy products including milk, butter, Cheddar cheese, ice cream, yogurt and cottage cheese. By taking part in the judging contests, students learn how to determine if products have quality defects. Members of the judging team often obtain a position in quality control or manufacturing and they use their product judging skills to identify issues and improve the quality of dairy products.

The contest was hosted by the Wisconsin Cheese Makers Association and was sponsored by the U.S. Department of Agriculture and more than 35 dairy associations, companies and suppliers.

Additionally, the team placed first in All Products at the 2019 Midwest Regional Collegiate Dairy Products Judging Contest held April 6 in Coopersville, Mich. The team also placed first in Cheddar cheese, butter, cottage cheese and yogurt. A total of 32 undergraduate and graduate contestants from nine universities participated in the contest.

The contest was hosted by Continental Dairy Facilities and sponsored by more than 20 dairy companies and suppliers.

SDSU has a long history at the contest and has won the national championship eight out of the last 10 years and 24 times in the 97-year history of the contest.