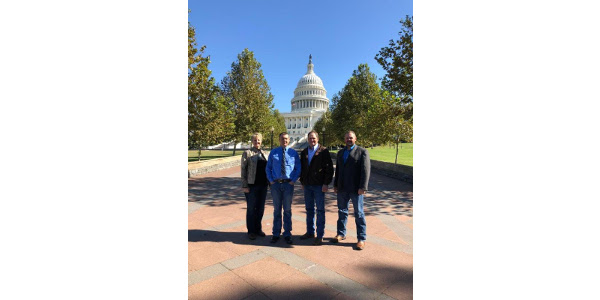 The U.S. Department of Agriculture (USDA) is deciding whether or not lab-cultured tissue should be labeled as meat. Four South Dakotans traveled to D.C. to testify that they do not support labeling lab-cultured tissue as meat Wednesday, October 24 at the USDA headquarters, (left to right): Karla Hofhenke, Executive Director, S.D. Farmers Union; Rocky Forman, Member Services Coordinator for S.D. Farmers Union, Eric Sumption, a Frederick cattle producer and Brett Kenzy, a fourth-generation cattle producer who operates a cow/calf herd and feedlot with his brother, George, near Gregory. (Courtesy of SDFU)

HURON, S.D. — The U.S. Department of Agriculture (USDA) is deciding whether or not lab-cultured tissue should be labeled as meat.

Many do not support labeling foods produced using animal cell culture technology as meat. And, for good reason, said Eric Sumption, a Frederick cattle producer who traveled to D.C. to testify on behalf of his family’s cow/calf and feedlot operation.

“I believe it is wrong to label lab-cultured tissue as meat, because I understand the investment of time and labor that goes into raising cattle. My family and I raise beef cattle from birth through the feedlot. We care for them each and every day until we sell them to be harvested,” Sumption explains. “The term meat is our brand, applied to a product that livestock producers, like me, my father, grandfather and great-grandfather worked for generations to perfect.”

Sumption is among four South Dakota Farmers Union members who traveled to D.C. to testify Wednesday, October 24 at the USDA headquarters.

“All consumers have the right to know what they are purchasing,” added Brett Kenzy, a fourth-generation cattle producer who operates a cow/calf herd and feedlot with his brother, George near Gregory. “My biggest fear is the day that lab-cultured tissue is mixed with fat from cattle raised in the traditional manner and the label on the package reads, “hamburger.” If we don’t maintain truthful labeling, how will consumers know what they are buying?'”

Kenzy further explained that identifying a product developed in a petri dish or other media with the same label as livestock – cattle, pork, chicken, turkey, fish – raised and harvested in the traditional way, could dissolve trust between consumers and livestock producers. Trust, that has been earned over generations.

“I am testifying because I question the integrity of our food labeling system based on past performance of the Food Safety and Inspection Service. Today, foreign meats are labeled as Products of the U.S.A.,” Kenzy said. “To maintain trust, the definition of meat needs to be restricted to animals that are born, raised and harvested in a traditional manner.”

The push to label lab-cultured tissue as meat has big money backing it. The reason? Corporations like Tyson Foods and Cargill have millions invested. To date, Tyson Foods invested more than $57 million and Cargill announced $72 million in funding.

“By law, agencies like the Federal Drug Administration and Food Safety and Inspection Service have a responsibility to ensure true and accurate labeling of food products,” said Rocky Forman, who is testifying because he understands how crucial accurate labeling is to consumers. His 4-year-old daughter, Mayli, was diagnosed Celiac disease.

“It is my responsibly as her father to protect her. I can only do this if the Federal Drug Administration and Food Safety and Inspection Service do their job,” said Forman, S.D. Farmers Union Member Services Coordinator. “Consumers trust that when they buy a product labeled as meat, it has been raised and harvested in the traditional manner – not at a lab in a petri dish or other media.”

Karla Hofhenke agreed. “The truth should be in the labeling,” said Hofhenke, who is a fourth-generation South Dakota cattle producer and the Executive Director of South Dakota Farmers Union.

Hofhenke traveled to testify on behalf of the more than 17,000 South Dakota farmers, ranchers and their supporters who make up the grassroots organization.

“The majority of our family farmers and ranchers raise livestock to be harvested for meat. Labeling animal cell culture products as meat would give the new technology an unfair market advantage, by letting them market on the reputation which producers have spent generations to create,” Hofhenke said.

Share your thoughts with the USDA
The USDA Food Safety and Inspection Service and the Food and Drug Administration are hosting a joint public meeting/comment period to discuss the potential hazards, oversight considerations and labeling of cell cultured food products derived from livestock and poultry tissue now until November 26, 2018. Readers can leave a comment by visiting this online link: https://www.regulations.gov/document?D=FSIS-2018-0036-0001.