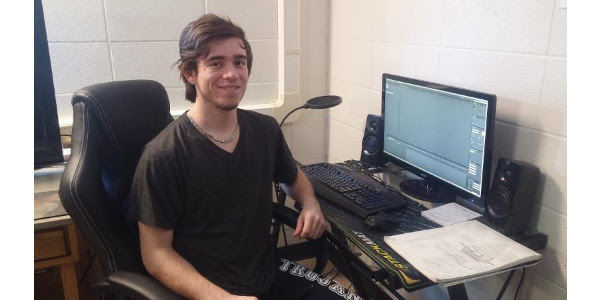 Below, the college students visit about what they look forward to in this new leadership role and discuss how the personal leadership development and communication skills they developed through Farmers Union educational programming has helped them during their first year of college.

How is college going?
Jesse Carlson Answers: It’s a unique adventure going from a town of 500 to a dorm of 500! And, a lot of fun.
I made the Dean’s List with a 3.9 GPA ­ so academically things are going well.

The biggest skill Farmers Union helped me develop was my communication skills. As a member of the National Youth Advisory Council, I gave a speech in front of 800 people during the 2016 National Convention. I have been selected to serve in leadership roles here on campus; I am currently serving as President of my dorm, Young Hall.

I don’t think I would have been selected without the leadership skills I have gained from Farmers Union.

Reece Schultz Answers: College is going great! Farmers Union youth programs gave me confidence to visit with people I didn’t know. Before I got involved in Farmers Union, I felt comfortable to be in my own little world.

Farmers Union broadened my world and encouraged me to be more inclusive of other people. I learned how important it is to reach out and visit with other people and make connections.

What are you most looking forward to in this new leadership role?

Reece Schultz Answers: My goal is to be helpful and give ideas to the Youth Advisory Council to help them develop a successful Leadership Camp.

Leadership Camp is where I broadened my horizons. I want to help the Youth Advisory Council develop a camp that does that for this year’s campers.

There is nothing better than to see campers who are more introverted, and after a few days at camp, open up, gain confidence and communication skills.

How did Farmers Union prepare you for this mentorship role?

Jesse Carlson Answers: Farmers Union provided me with leadership opportunities that taught me what makes a good leader. I will use these experiences to help me provide guidance.

Reece Schultz Answers: Farmers Union Youth Educational programming helped me understand what kind of responsibility you need to be a good leader. I feel like the camps and trainings have prepared me well for this mentorship role.

Do you plan to stay involved in Farmers Union after this role?

Reece Schultz Answers: Yes! I want to learn more about the organization and learn how I can become more involved. I have a lot to learn, but I do know I want to remain involved. Farmers Union has helped me out so much in my life. I want to ensure others have similar experiences.

Jesse Carlson Answers: Absolutely, 100 percent I want to stay involved. I am currently a member of the collegian Farmers Union chapter here at SDSU.

Farmers Union has helped me through so much in my life; it is a great organization and I want to stick with it.

Much more than fighting wildland fires