Home / South Dakota / SDFU celebrates the Maher ranch family
A new user experience is coming! We'll be asking you to login to your Morning Ag Clips account March 1st to access these new features.
We can't wait to share them with you! Read more here. 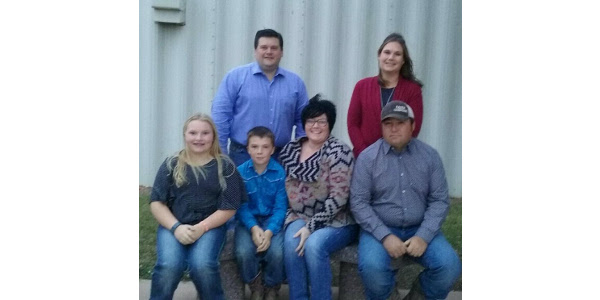 HURON, S.D. — Growing up one of 12 on a ranch north of the South Dakota state line, Mike Maher has many fond memories.

“We did have a lot of fun. My brother next to me and I would hop on our horses in the morning and lope eight miles to help our cousins work cattle,” says the third generation Ziebach County rancher. “We never knew what riding in a saddle was like – dad had the only saddle and we knew better than to touch it. We lived on a river, but none of us knew how to swim because our horses could swim. If we had to cross the river, Dad would always stand on the riverbank to make sure we all got across.”

It could have been memories like these that impacted Mike’s decision to follow in his dad’s boots after high school – even though there wasn’t room for him on his family’s ranch.

He’s not sure why he chose to be a rancher. But he does know this, “It’s all I’ve ever done. And, I don’t punch a time clock.”

“I was working as a welder for the mines, managing a bunch of people who did not want to do their job and decided that I needed to get back to the ranch,” explains Wade, who packed up his family and returned to ranch with his parents four years ago.

Wade’s parents met at a dance when Mike was working on a ranch near Isabel.

Marcia Rost was born and raised on the ranch her grandparents, Freida and Albert Rost, homesteaded around 1910 (although they didn’t file their paperwork until 1917). And, like Mike, Marcia appreciates ranch life.

“I just like the country life. Growing up, I worked outside most of the time. I like the open spaces, the fresh air,” she says, then jokes, “when you don’t smell cow manure.”

Marcia explains that after they married, they didn’t plan to return to ranch with her parents, it’s just how things turned out. “None of my brothers were interested in the place, so we moved up here because Dad needed our help.”

Looking back on when he first began working with Marcia’s dad, John, Mike says now that his kids are grown and running cattle with him, he knows how it must have been for John.

“It was like how it is with my kids working with me. He wasn’t used to some of the modern stuff. Today, I get something new and I don’t hardly touch it – all the computers and stuff. At the time, I thought he was really old and set in his ways. I look back at it and I am probably that way now,” Mike explains.

Mike and Marcia both say that taking over her family’s ranch was a good decision.

“We are the third generation to raise livestock here. We have had good years, and a few rough years, but that is the way agriculture is. If we wanted to make lots of money, we could have moved to the city, but really, Mike wouldn’t know what else to do,” says Marcia, who also works as the postmaster in Isabel.

Throughout the years, the family faced predator issues, which eventually resulted in them deciding to sell their commercial sheep flock.

And, before that, there were the years of drought and 18 percent interest that forced them to sell everything, except their land to remain solvent. Mike was 40.

Their tenacity to overcome those challenges demonstrates how serious the family takes their role in the ranch’s legacy, explains their oldest son, Ryan.

“I guess it has something to do with the fact that we have been raising cattle on this land for more than a century. Out in the cemetery, I have my great-great-grandfather, great-grandfather and grandfather – and that’s just on my granddad’s side,” Ryan says. “From watching my parents, I’ve learned that you stick with something and keep going forward and doing the best you can every day.”

Ryan shares a memory of feeding livestock without a tractor the winter after they sold everything. He and his dad attached a grapple hook to an old pickup to feed bales.

“We’d drag it to where we wanted it, cut the strings and unroll it by hand. That’s how we fed that one winter,” explains Ryan, adding that he has a strong work ethic thanks to growing up on the ranch.

After college, Ryan spent the first few years working as an accountant in Omaha and Denver. Then, he returned to Isabel where he bought a bar and restaurant, started an insurance agency and became involved in government. He serves as the Assistant Majority Leader in the State Senate for District 28.

Ryan adds that his parents’ faith probably had a bit to do with keeping them going. “They never miss Mass.”

Mike adds that it was the faith others had in him and Marcia that helped them build back up. He shares a story about an area rancher who believed in him enough to co-sign a loan.

“He called me up and said, ‘I bought 200 ewes at Faith. I will either sell them to you for what it cost me, or you can run them on shares.’ So, we went to the bank for a loan for what my share would be, and the banker turned me down. So we went to town, had a drink and discussed it and went back to the bank. My friend sat back down with the banker and said, ‘I suppose you thought you were done with us? This is the way it will be. You borrow him the money and I will cosign the note.'”

Over the years, Ryan says his dad has returned the kindness, helping other young ranchers get started.

Nearly three decades later, Mike, Marcia and their three children, Ryan, Ann and Wade have increased the size of the operation significantly – slowly expanding when land comes up for sale. They raise primarily commercial Angus-cross cattle, marketing their steer calves in the fall and keep all replacement heifers.

All three children own land and run cattle with their parents.

“Ranching is a hard lifestyle, but it’s also rewarding,” explains Ann, who spends the weekdays working as a registered dietitian. She spends off hours helping out on the ranch. “When you are saving babies out in a blizzard, and come fall you are selling them, and see how good they look – even if the markets are not very good, it makes all your work feel worthwhile – like you did something.”

She agrees with Ryan, working on her family’s ranch has had a positive impact on her professional career. “It taught me how to work and not to be afraid of long hours. It taught me to take initiative and look for what needs to be done and to appreciate the simple things in life. I enjoy the ranch. I enjoy being outside, working with my horses, dogs and cattle. I enjoy the lifestyle.”

For Mike and Marcia, the fact that all three children returned home means a lot. “It’s the fourth generation who is making it work now and that’s a good thing,” Mike says.

To view photos of life on the Maher ranch and read other articles about South Dakota family farmers and ranchers, visit www.sdfu.org.