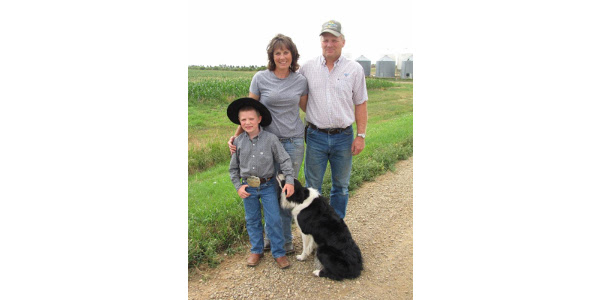 South Dakota Farmers Union has served South Dakota farm and ranch families for more than a century. Throughout the year, we share their stories in order to highlight the families who make up our state's No. 1 industry and help feed the world. This month we highlight the Beer ranch family who raise cattle and a diversified crop operation east of Lemmon. Danni and Mike Beer are pictured here with their youngest, Blaze, 7. The couple have three older children; Bobbi Froelich, 24; Bo, 23; and Bailie, 20. (Courtesy of SDFU)

HURON, S.D. — Pulling back a thick layer of crop residue with his bare hands, Mike Beer digs into the earth and holds up a black clump of soil alive with earthworms.

“This is heavy clay and when I first started farming, it was hard as a rock. Now, look at it – it’s like a vegetable garden,” says the Keldron rancher. “I’m a soil person. Even as a kid I was always playing in the dirt, digging holes. I was curious.”

He goes on to explain that even as a young teen, he would go out onto the range and dig deep holes.

“Everyone has something and for me, it is soil,” Mike explains. “I remember seeing the different horizons and understanding that they were different soil types – long before I ever read that in a textbook.”

What began as a childhood hobby became a useful talent in college when he judged on South Dakota State University’s nationally ranked soil judging team.

His interest in enhancing soil health led him to work in the university’s soil lab and complete a 1991 senior research project on no-till farming practices – at the time, a foreign concept in northwest South Dakota.

Today, the soil management practices Mike has implemented for nearly three decades are key to his family’s livelihood on their farm and ranch where Mike and his wife, Danni, raise cattle and a wide range of crops including registered spring wheat, winter wheat, corn, sunflowers, millet, soybeans, chickpeas, hay and cover crops.

Mike, 48, and Danni, 47, were among the first in northwestern South Dakota to implement no-till farming practices. No-till is now the norm because of its ability to capture and retain soil moisture in a region where, “moisture is our limiting factor,” explains Danni. “When we started farming here, everything was strip farmed – one year wheat and one year fallow.”

Dust storms were just part of life. Today, thanks to no-till’s popularity among growers, the couple says wind erosion is no longer much of an issue.

They rely on the diversity of their crop rotations to naturally control weeds and disease pressure. Mike explains that for two years they will plant cool-season grasses – like spring wheat and winter wheat. Then they will follow that with two years of something else – like a cool-season broadleaf, such as field peas – followed by a warm-season broadleaf like sunflowers or warm-season grasses like corn or millet.

“We spray a lot less today than we did 25 years ago,” Danni says.

Working toward a goal
Although Mike did not grow up on a farm or ranch, his roots run deep in South Dakota agriculture. His family homesteaded in Ziebach County.

As a teen, he worked for area farm couple Jack and Barb Wanstedt. Their grown children were not interested in returning home to run the farm/ranch so they reached out to Mike.

“They told me that after I went to college, if I wanted to take over their place, they would help me get started,” Mike says. “It was always my dream to farm.”

Like Mike’s passion for the land, raising cattle was all Danni could envision herself doing. A third generation rancher, she grew up in North Dakota on a registered Angus operation north of Morristown, S.D.

Friends since middle school, Mike and Danni began dating in high school. They attended SDSU. Mike graduated with an agronomy degree and Danni with a degree in agriculture education.

Following graduation, the newlyweds set about building an operation that would sustain their growing family. They have four children; Bobbi Froelich, 24; Bo, 23; Bailie, 20; and Blaze, 7.

“We have always been goal setters. It was our goal to have a full-time operation where we could both work together day-in and day-out,” Danni explains.

Over time, they slowly expanded, adding to the land they purchased from the Wanstedts.

Today, their oldest son, Bo, works with them and is building up his own cattle herd.

A few years ago, they started seeding in cover crops for additional fall forage as they harvested their small grains mid-summer. “One of us will run the combine while the other runs the drill. This technique captures the remaining soil moisture. In this country, you won’t get seed to germinate if you wait because we may not get another rain,” Mike explains.

It’s the last week in July and the only rain the family has seen in weeks fell the week before.

“We’re at 40 percent of normal,” Mike says of the 4.6 inches of rain the ranch received thus far for the 2017 growing season.

Last fall when they began to fall behind on moisture, the Beers adjusted planting decisions based on fields’ moisture potential. And, when things didn’t look like they were going to change much this spring, they decided to sell calves early to help maintain rangeland health.

“With drought you make a plan then you end up changing it in a couple days,” Danni says.

They ended up having a couple miles of pipeline installed so they could supply well water to pastures which had dams that tested positive for high sulfate levels.

During a drought year, Mike says the years of no-till and other soil-building farming practices pay off. “Look here,” he again pulls back a 4-inch layer of residue in a field of corn, uncovering moist soil. “I plan to harvest most of my acres for grain.”

Nearing the end of harvest 2017, the Beers report that all crops were harvested, but some of the winter wheat was used for hay. As of mid-October, they are optimistic about corn and sunflower harvest.

“We got a little rain the first part of August which really helped things,” Danni says.

To learn more about the Beer family and view a photo gallery, visit www.sdfu.org.