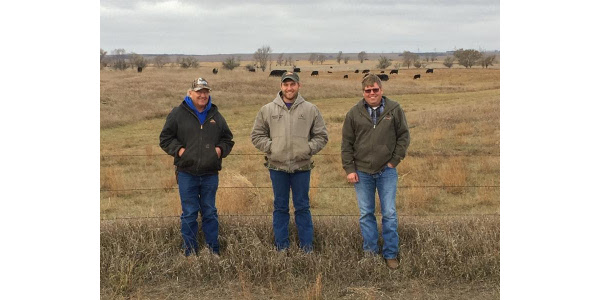 South Dakota Farmers Union has served South Dakota farm and ranch families for more than a century. Throughout the year, we share their stories in order to highlight the families who make up our state's number one industry and help feed the world. This month, we feature the Mehling family who raise crops and cattle southwest of Wessington. Pictured here (left to right) Roy, Cole and Greg. (Courtesy of South Dakota Farmers Union)

HURON, S.D. — Ask Greg Mehling, 53, what his favorite Christmas gift was as a child and without hesitation he names the miniature thrashing machine his dad built for him.

“The summer Greg was 6 we took him to Prairie Village. He came home needing a thrashing machine, so I worked in the garage every night until Christmas,” recalls Greg’s dad, Roy, 74.

The fourth-generation farmer’s early introduction to farm equipment didn’t stop with toys. By 7, Greg was driving a tractor. “Farming’s kinda in my blood. I enjoy it,” he explains.

After a brief detour to Lake Area Technical Institute and a few job interviews, Greg knew that even though times were tough, farming was the only career for him.

“It was the 80s, so the farming deal wasn’t really good, but after a few job interviews, I knew that farming was the only work I wanted to do,” Greg explains.

Fortunately for Greg, who was 23 at the time, older relatives neighboring his grandparent’s place were ready to sell their farm. They sold it to Greg for $200 an acre, contract for deed.

“I could not have done it without the help of my dad,” Greg says.

Although the father and son kept their finances separate ­ and still do – Roy let Greg use his machinery in exchange for labor.

Nearly 30 years later, Greg made similar arrangements to help his oldest son, Cole, 26, start his farming career. “Getting into farming would be pretty hard for anyone to do on their own,” Greg explains.

Cole began building his cattle herd as a 4-H member. Today he is among a growing number of young farmers returning to the area.

“I have a lot of buddies from grade and high school who have come back to farm with their dad or grandpa,” says Cole.

“It gives new life to the town,” Greg adds. “It seems like it skipped a generation of people my age returning to the farm.”

Today, their farms are within a mile of each other. The men share labor and equipment, run their cattle together and even market their corn, soybeans and wheat together. However, their land, cattle, inputs and finances remain separate.

“Like Cole, I started out working with my dad and grandpa. It’s nice because you know each other so well you can pretty much pick up and do anything that needs done and know how they want it done,” Greg says.

Cole adds, “If you have questions, it’s nice to have someone to go to whom you trust and has been successful.”

“I did the same with my dad and grandpa,” Greg adds. “With the costs of doing business in agriculture, you can’t afford to make too many mistakes.”

Reflecting on their farming operation–they raise soybeans, wheat, corn and a cow/calf herd–and philosophy, the men say farming is more than a paycheck; it is a way of life.

“My grandpa was still running a combine at 93. My dad is the same way and I am sure I will be the same way ­ this is our retirement plan,” Greg says.

“I would not have been able to keep farming if it weren’t for Greg and Cole ­ the only thing I don’t do anymore is the livestock,” Roy says. “I like what I do, so why quit?”

Roy has been living in the neighborhood since his dad and mom, Richard and Lorraine, moved to the Wessington area from Minnesota in 1942. Roy was a baby.

Of course the family’s farms look much different today than they did when Roy, and even Greg, were children. Roundup Ready technology allowed the men to move into no-till farming in the early 90s.

“As a kid I spent a lot of time on a plow and I don’t think Cole has ever been on one,” Greg says. “No-till allowed us to get bigger without the labor of cultivating. Some of the ground we farmed was heavy gumbo. It was difficult to get a good stand of corn on that. It’s amazing to see the difference in yields once we began no-tilling.”

They explain that embracing precision farming technology has also cut back on labor and paid for itself by reducing input waste. “With auto-steer you have to keep yourself from falling asleep,” Roy jokes.

Diversification has done more than help keep their enterprise profitable.

“Even though it doesn’t seem like prices are good for anything right now, as a farmer you learn not to get discouraged ­ you learn to adapt,” Greg says.