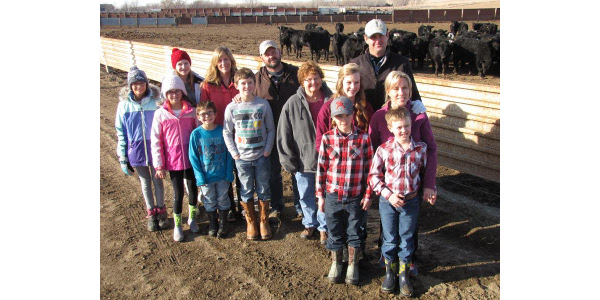 Pictured here Millie Kenzy (middle) and her sons, Brett Kenzy (back row left) with his wife, Jessy, and their five children: Gracie, 13; Sierra, 13; Sapphire, 12; Rane, 10; and Harvey, 8; and George Kenzy (back right) with his wife, Shelly, and their three children: Brooklynn, 13; Nicholas, 10; and Tyler, 9. (Courtesy of South Dakota Farmers Union)

HURON, S.D. — Ralph Kenzy used to tell his sons, “You can’t put it all in your pocketbook.”

“He meant that agriculture is a lot more than money,” explains his oldest son, Brett, 45. “You get to be on the land, raising your kids. You get to work with crops and cattle. You’re never going to get rich ranching … there’s more than dollar bills that make you rich.”

Brett has worked on the family ranch since childhood ­except for a short break to serve in the Army and attend college. “I came back because I missed the community, the home base, this tie to the land,” Brett explains.

Like his older brother, George only left the Gregory ranch long enough to get a degree ­ and even when they were college students, the fourth-generation cattle producers drove home to work every weekend.

Listening to the brothers/business partners visit about raising their children and cattle on the family’s ranch, it is clear that Ralph’s philosophy lives on through his sons. Ralph passed away in 2012.

“I kind of figured they would come home to ranch because they were home every weekend to work,” says their mom, Millie.

The ranch’s self-designated “go-fer,” Millie works with her sons daily. “It is fun working with my sons, and it is great because I get to see the grandkids grow up and see them learn everything,” she explains.

The family has just enjoyed a Sunday dinner together. As they visit about their operation, the cousins are hanging out.

George and his wife, Shelly, have three children: Brooklynn, 13; Nicholas, 10; and Tyler, 9. Shelly works for the Gregory School District.

As the adults visit around the kitchen table, the girls are cleaning up after the potluck lunch.

The boys have been lured outside by the sunshine and above zero temperatures.
Through the kitchen windows it’s obvious that the fifth-generation is getting ready for a game of Lightning as they shovel snow off the concrete slab where the basketball hoop stands.

“It’s our goal to have this place be home base for all our kids. We know they will not all be able to return home to ranch, but even if they are not working here, they know they are always welcome here,” Brett says. “This is where it all started.”

Brett and George’s great-grandfather, George, homesteaded the ranch around 1900. As kids, the boys say the ranch was more diversified. Their dad raised a cow/calf herd, market hogs and a flock of sheep.

Following the markets’ lead, their dad got out of hogs and sheep. Then, when the brothers were still pretty young, a tragedy led their dad to begin backgrounding and custom feeding.

Their cow herd was infected with Brucellosis (bangs disease). The cows aborted their calves and the herd had to be slaughtered.

“As I recall the story, dad bought some cows, which were all tagged, indicating they had been vaccinated, but turns out they weren’t,” George explains.

“It’s the old cliché: when one door closes, another opens. It was tough, but a bank note is a wonderful motivator,” Brett adds.

Together, the boys helped their dad build the feed yard. Year-by-year the operation expanded. In 2008, to be in compliance with state and federal regulations, the men built a new 3,100-head capacity feed yard.

Today, cattle are the only cash crop on the ranch.

Brett and George have a 300-head cow/calf herd and are permitted to background 3,100-head of cattle. The brothers background their own calves, purchase local cattle to feed and custom background for other producers. The ranch produces most of their forage needs while purchasing grains and DDG (dried distillers grains).

“We try to source as much as we can locally,” Brett explains. “When we built this feedlot, everything we did, from the dirt work, to fencing and banking ­ it all was local. Even our machinery – when we can, we purchase locally.”

Overcoming challenges, George explains, is just the nature of ranching. “You learn from a young age listening to the older generation that not much is in our control. We are dependent upon the rain, weather and markets. I remember one summer, I couldn’t have been more than 5 and it was so dry, I wanted to set the garden sprinkler outside my dad’s window so he could wake up to rain on the window.”

Brett added, “This is ironic because dad always said the only thing that grew in ’76 was George!”

During the Farm Crisis of the 80s, Ralph became active in the American Ag movement.
Following his lead, today, as the family faces financial challenges brought on by a nearly 50 percent drop in the cattle markets, the brothers have renewed their involvement in Farmers Union and R-Calf.

“If you’re not speaking out, someone is speaking for you. If you can’t find the words, then join an organization who will speak for you – and don’t be afraid to quit an organization if they quit speaking up for you,” George says.

Brett adds, “I joined S.D. Farmers Union in 2008 because they pushed for COOL (Country of Origin Labeling).”

“When I was visiting with congressional staffers, I tried to explain what limited competition among processors and lack of transparency is doing to consumers and producers. It’s like an hour glass, you have all these people on the top who are producing the food and cannot afford to. And, all these consumers at the bottom who cannot afford to buy the food. It’s the guys in the middle who are getting all the money.”

Even though times are tough right now, the brothers aren’t discouraged.

“There are a lot of conversations going on right now about competition and transparency. I am hopeful that good will come out of this,” Brett says.

He adds that while in D.C., he was inspired by what he saw during a tour of George Washington’s farm, Mt. Vernon.

“This country was built, ultimately, by agriculturists. The first several guys ­Washington, Jefferson ­ they were farmers.”