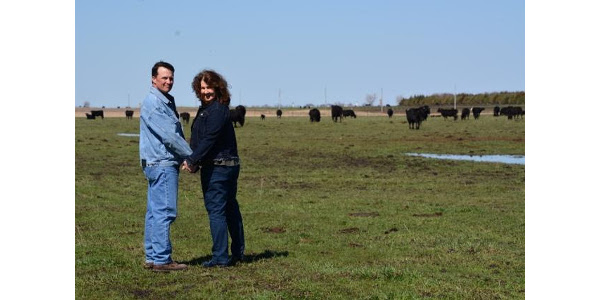 South Dakota Farmers Union has served South Dakota farm and ranch families for more than a century. Throughout the year, we share their stories in order to highlight the families who make up our state’s No. 1 industry and help feed the world. This month we highlight Mike Miller and Michelle Friesen. The couple have farmed together near Freeman since they married in 1996. They raise corn, soybeans, a cow/calf herd and feeder operation. (Courtesy of SDFU)

HURON, S.D. — Standing in their pasture, surrounded by cows with their new calves, Michelle Friesen points to a shelterbelt off to the southwest. “My mother grew up on a farm over there, about a year after my parents were married, my grandparents bought this place for my parents and they moved here,” explains the fourth-generation Freeman farmer.

Quick to point out that although she grew up on the farm and spends five days each week actively involved, farming is actually her husband, Mike Miller’s passion. Music is hers.

“My mother says that from 2-years-old on, I begged for a piano,” says Friesen, who is a soprano in the Sioux Falls Symphony Chorus and owns a piano studio, teaching 20 students each week. “I love music. It’s all around us. It’s everywhere you go.”

Before the couple married, she was living in Kansas teaching music and worked as the pianist for a junior college choir and Miller was farming fulltime. She knew marrying him meant she would return to farming, but she also knew he would support her in pursuing music and performing.

“Farming is his passion and this farm is more than what he can do on his own. So, as long as it works for me to do music and perform, I am available to help with farm work three-fourths time,” Friesen says.

Together, the couple raise corn, soybeans, a cow/calf herd and feeder operation. They lease some farmland and pasture from Michelle’s parents, Maureen (Hofer) and Marlyn Friesen, who retired in 2013.

Like Friesen said, farming is Miller’s passion. As a little boy, he remembers making the 50-mile drive from Sioux Falls to his grandparents’ Freeman farm each Saturday so his dad, Max, could help on the family’s farm and farm 80 acres he owned. After his grandpa, Edward Miller, passed away, his family moved to the farm fulltime.

“I always knew I wanted to be a farmer,” Miller explains.

“The family tells a story that one morning they got up and couldn’t find Mike. He was already on the tractor,” Friesen adds.

A while after the story took place, his family suffered a tremendous loss, when his dad was killed in a farm accident.

About that time, Miller began working for a local dairyman, Steve Friesen. “I worked for him all through high school and college. Before I even graduated from high school, he said, ‘you let me know if you want to farm, and I will help you get started,’” Miller recalls.

After college, he took over the lease on a quarter of land his mom, Marlyce, owned and began farming. Steve loaned him equipment and gave him advice. “I couldn’t have gotten into farming without Steve’s help,” Miller says.

“Someday, we’d like to do the same for a young farmer,” Friesen adds.

Conventional crop farmers, the couple implements outside-the-box thinking when it comes to managing their cow/calf herd.

“Efficiencies are the name of the game,” Miller says. “We calve half the herd in the spring and the other half in the fall because I have enough feedlot space for 120 head, but we calve more than 200 head. This way I don’t have to invest in larger facilities.”

Although it’s tough to juggle calving in the spring and fall during planting and harvest, typically, the weather cooperates. However, this spring, due to extreme moisture, Miller says planting is postponed, so they will have most of the calving done before planting begins.

They sell the feeder calves in January and May at auction markets in Worthing or Yankton.

“It’s good to be diversified so we aren’t tied to one commodity, and when that commodity is at a low, then you’re stuck. But, when you have some diversification, the highs in other areas can keep you going,” she says.

Miller uses forward contracting to market their corn and soybeans. “I don’t have to hit a home run, but I have to get on base. My object is not to hit the high of the market, but to avoid the low,” he explains.

Closely connected to their hometown and school, Freeman Academy, they are actively involved in their community. Together, the couple donates their time and equipment to farm a quarter of land that belongs to Freeman Academy. The money raised at harvest helps fund the local Christian school.

They serve as two of 250 Schmeckfest volunteers. Since 1959, Schmeckfest has been an annual festival/fundraiser for Freeman Academy, which serves kindergarten through high school. Running two weekends each spring, the event includes meals and a community play. This year, Friesen was the director of the musical, “The Boyfriend,” a 1920s-era romantic comedy.

“Growing up here I had a lot of people who did a lot for me. I believe in paying it forward and while I’m on this earth I want to be invested in the people who are on it,” she explains.

For more than 17 years, Miller has served on the board of Country Pride Cooperative, he is on the board of the South Dakota Cooperative Association and in 2018, he was elected to serve on the SDFU Board of Directors, representing District 1.

“The more I became involved, starting with our local cooperative, and the more I learned about agriculture in South Dakota, it made me realize, we need to speak up for ourselves,” he says. “We are only 2 percent of the population. Another reason to get involved in Farmers Union, because Farmers Union gives us a voice.”

To view more photos of life on Mike and Michelle’s farm, visit www.sdfu.org and click on the Celebrate Farm Families icon.